I can easily say that Munich is one of my favourite cities in the world if not my very favourite. I do not know why there could be a multitude of reasons for this. Maybe it is the easy-going nature of the Bavarians.

Maybe it is a city with a great history and monuments. Maybe it is the beer they produce. Remember the names Paulaner, Franziskaner, Hasker Pshorr, Augustiner and Lowenbrau.

These are the original Munich beer makers. Steady yourself for a diet of Pork knuckles, schnitzel, sausages, chicken and potato salad. To me, I feel more at home in Munich than in any other city in Europe.

I have been to Munich 4 times in the past and will certainly go there again. The city of beer, sausages and giant pretzels is a must visit for all. There are so many things to do in Munich

In 1715 further construction and design of the Palace was started once again and continued on and off for most of the 17th century under different Bavarian Royal families. The gardens that surround Nymphenburg Palace are 490 acres in size.

I must say I have never really explored the gardens in length as they cover such a large area but I image they would be fantastic on a beautiful sunny Munich day. You can tour the inside of the palace at your own pace with an audio guide. The inside of the palace is very opulent as one would expect. There is also a horse carriage museum.

This house’s the amazing ornate carriages that the Royals used to ride in during their times. If you visit during the winter the lake may be frozen over and ice skating may be an option for you. Bavaria’s most famous King, King Ludwig spent time living in Nymphenburg with his family.

Family travel tip: take some bread with you and you will be able to feed the swans and the ducks that live on the lake. Out the front on the street is the best ice cream in Munich. make sure you get the spaghetti ice cream it is amazing. This is one of our top things to do in Munich with kids

Some of these original items include the first motorized aircraft built by the Wright brothers, the U1 submarine, the first program-controlled computer (Conrad Zuse’s Z3), and Diesel’s original engine on the island, the first motorcar by Karl Benz in the transport museum, the Douglas DC3 at Schleißheim; and the first Fischer wall plug, in Bonn. We spent half a day at the Museum and did not even scratch the surface.

Family travel tip: There are a large number of interactive displays at the museum that your kids will love. There are specialized kids programs available at the museum for children to participate in. Add this to your schedule in downtown Munich.

The Dachau Memorial Concentration camp was established by Aldof Hitler in 1933 to house political prisoners. Throughout the lifespan of the Dachau Concentration Camp, it housed prisoners from all walks of life.

These included homosexuals, immigrants, Jehovah witnesses and jews. Today at Dachau you will find a handful of the original building that remains and the foundations of many more. You will find permanent exhibitions that focus on the fate of the prisoners.

You will follow the Dachau prisoners through there incarceration, time in the concentrations camp and their fate to death or liberation. From time to time there will be special exhibitions on display.

We totally recommend that you do a guided tour of the Dachau Memorial site. The guides will tell you so much more about the site and enrich your experience at Dachau. There are Munich walking tours that leave from The city ( don’t worry you get a train to the site then walk ).

You can also book a tour once at Dachau. It is a site not to be missed. Dachau is located 30 kilometres by car from Munich or you can take the S2 train from Munich in the direction of Dachau/Petershausen until you reach the Dachau station. Check here for a range of visit Dachau Memorial camp tours

What to do in Munich – Hofbrau House

The most iconic beer house in the world is how I would describe Hofbrauhaus Munich. Hofbrauhaus is only second to Oktoberfest as an attraction in Munich. Founded in1589 by the Duke of Bavaria. It was originally founded as a brewery to the royal family.

In 1828, King Ludwig 1 opened the beer hall to the public. Today Hofbrauhaus can hold 3,500 beer drinkers and diners simultaneously. These patrons are serviced by 100 waiters and waitresses serving up to 30,000 guests a day at peak times.

Hofbrauhaus can be enjoyed by all. Music can be found playing at different times throughout the day. If the beer hall atmosphere is too busy for you there is a more personal experience waiting for you on the second floor in the smaller Bräustube.

Hofbrau’s popular wurst sausage is made fresh every morning at 4 am to be ready for famous beer and sausage breakfast that is served every day. I can personally say this something not is missed.


Family travel tip: Hofbrau is very kid friendly. You will find families and children in the venue at all hours of the day. The kids were very interested in how the waitresses could carry so many beers at once and the traditional ompha music.

As mentioned earlier Munich is at its heart and sole a beer town. Many people visit Munich especially just for the beer, Beer halls and beer Gardens, No article on Munich is complete without introducing you to the major players in the Munich Beer Market.

To be a part of Oktoberfest every year and have your beer featured and sold you must be a Munich brewery, Only 6 breweries have this privilege. The big Munich Breweries are as follows

Munich city centre is a great place to stroll around in the summer. There is plenty of cafe’s, restaurants and bars. Beer is a big thing in Munich and it is available everywhere.

There are a plethora of amazing churches to be viewed. If you are a fan of the Swan King Ludwig you will find his tomb in one of these such churches. Neuhauser Straube runs from Munich Karlsplatz to Marienplatz.

It is the main pedestrian mall and filled with shops of all design. The world famous glockenspiel at Munich Rathaus re-enacts two stories from the 16th century to the mass of tourists waiting patiently for the show.

It consists of 43 bells and 32 life-sized figures. Every day at 11 a.m. (as well as 12 p.m. and 5 p.m. in summer) it can be viewed. Munich has three original town gates left Karlstor, Sendlinger Tor and Isartor.

All three town gates can be viewed within the city centre region of Munich. These town gates were built during the 13th century as part of a defensive wall to protect the city. I love Karlstor picturesque with a fountain and leads down  Neuhauser Straube.

I love Isartor with its painted images of  Louis the Bavarian (Ludwig IV) after this victory over the Austrians at the battle of Ampfing in 1322. I love Sendlinger Tor because of its simplicity and how one would imagine a town gate from the middle ages would look.

BMW Welt is a burst of narcism from this German auto giant. It is everything the BMW group creates, constructs and sells all in the one place. BMW welt would cause heart palpitations among car lovers and even arouse a sense of recognition among us all.

BMW WELT displays all the BMW models, a world that pays homage to the Mini and even the iconic Rolls Royce that BMW now builds. You can hire a BMW for a cruise or just sit in the many models and dream. You can tour the factory or buy entry to the museum.

Motorbike’s, BMW merchandise and concept cars abound. I am not a car lover but BMW started my engine. We spent over 2.5 hours here looking, sitting, photography the cars. Best of all this attraction is free to visit, yes free.

Family travel tip: BMW has a junior campus for kids to learn key consepts. There is cafe’s and a restaurant. Free wifi and comfy couches to have a rest between sitting in cars and climbing on Motorbikes.

What to eat in Munch:

Bavarian cuisine includes many meat dishes such as Pork, Chicken and sausage. You will often find this accompanied by dumpling, potato and sourkraut. Some traditional dishes you try on your visit to Munich include

Any of these dishes will be found throughout Munch and Bavaria. The Bavarian cuisine is hearty and filling. Great Munich food will be found all through the city.

Wildpark Poing is located just outside Munich in Bavaria, Germany At Wildpark Poing, you see all the animals that once lived and roamed the forest of Bavaria.

There is over 4 km of track through the park where you can observe the Bavarian animals in their natural habitat at Wildpark Poing. The animals are penned in big and natural enclosures. We are not talking here we are talking big natural simulated environments for these animals.

I these enclosures they can roam and have some resemblance of what their life in nature would look like Wildpark Poing is a great way to spend an afternoon outside of Munich.

I hope you can find something interesting to visit in our article. I did not list Oktoberfest as it only happens for 2 weeks every year. By all means, if you can attend it amazing and highly recommended with or without kids in tow. You can read about out Oktoberfest experience here. Make sure you put Munich on your list of cities to visit you won’t be disappointed.

Where to Eat In Munch:

You will be most rewarded if you get a little out of the city centre. I must say we always love visiting the beer halls and beer gardens while in Munch. They are a must do in Munich.

The further out of downtown Munich you go the more authentic it will be. If you find a place and you can hear most people talking German you know you are in a good place to eat. Three Munich place to eat we recommend are

We have personally eaten at all these venues and would highly recommend a visit and a meal for a more authentic Munch food experience.

The best places to stay in Munich: 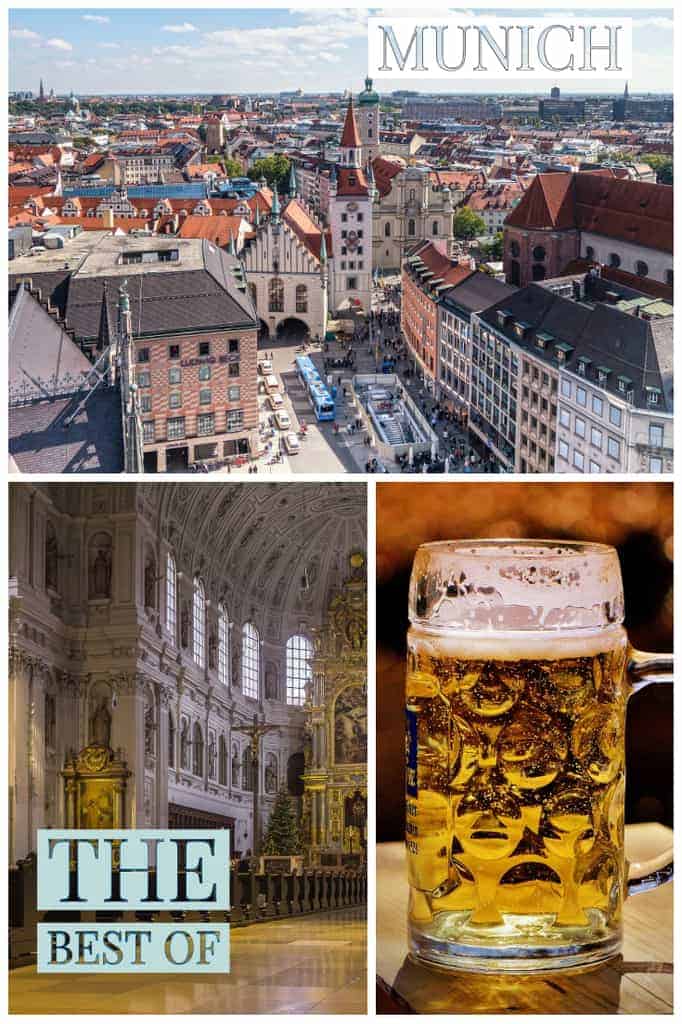