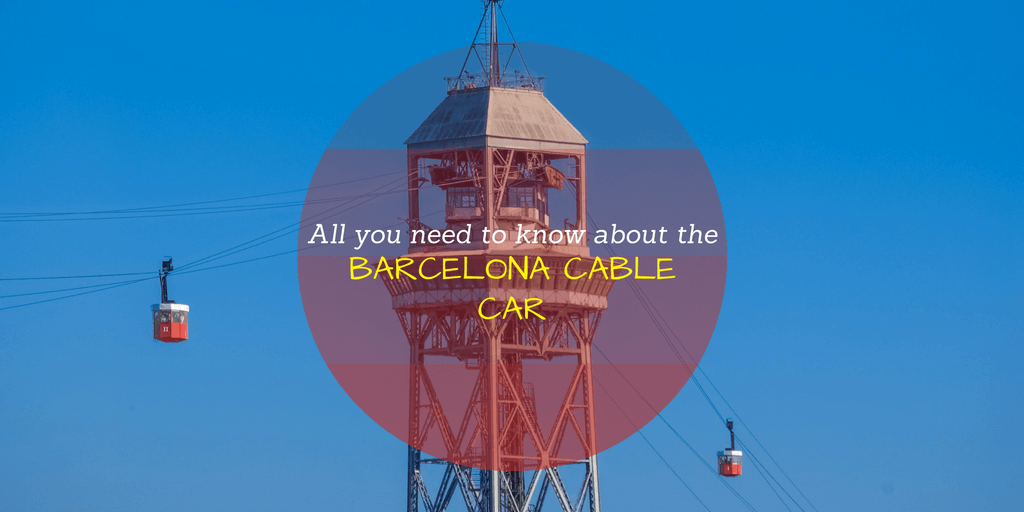 One of the first things I noticed in the Catalan capital was the Barcelona port cable car. Heading into the city from the airport you head around Montjuic and the harbour area comes into sight as one of your first views of Barcelona. Your eyes are immediately drawn to the cable car Barcelona that is cruising the sky in front of you. I knew straight away that it would be one of our favourite things to do in Barcelona with kids.

You see our kids love cable cars, ski lifts anything that involves heights. Wyld Family Travel activity here we come. They can’t get enough of this sort of activity. Only a few weeks earlier they dragged us up a ski lift in Zakopane Poland.

I must admit the views were fantastic. The Barcelona Ariel view would be equal to any we have seen. This excitement of going on all things cable car and gondola inconveniences their mother greatly. You see Bec does not like heights at all. Bec has got used to shelving her fears and just taking one for the team for the sake of our kids.

The Barcelona Cable Car is one the cities top attractions

The names used locally for this cable car service are the Teleferico Barcelona or “Port Cable Car”. The cable car is a bit of an oddity in Barcelona. Its link to the past that this city seems to want to forget. Barcelona you see is mainly a shiny new city. When Barcelona was awarded the Olympics in 1992 it went on a major redevelopment and demolished a lot of the old building in the city. I loved the old world architecture of its towers. The iron construction reminds me of the Eiffel Tower. The teleferico Barcelona was constructed as an attraction for the 1929 world’s fair that was held in Barcelona.

The size of the project was seriously underestimated and the cable car did not open till 1931. The venture has had a checkered past including being used as a machine gun tower during the Spanish civil war. It has opened and closed numerous times since its inception but with the re-development of the port area early in the late 1990s, its future was secured.

The iron construction reminds me of the Eiffel Tower. The teleferico Barcelona was constructed as an attraction for the 1929 world’s fair that was held in Barcelona. The size of the project was seriously underestimated and the cable car did not open till 1931. The venture has had a checkered past including being used as a machine gun tower during the Spanish civil war. It has opened and closed numerous times since it inception but with the re-development of the port area early in the late 1990’s its future was secured.

The Barcelona port cable car has 3 stations. You can only access two of these stations.  Montjuïc station at an altitude of 57 m (187 ft), passes through the highest point of Torre Jaume I which is 107 m (351 ft) high and ends at the top of Torre Sant Sebastià at 86 m (282 ft), from where an elevator descends to the streets of Barceloneta. The cable car Barcelona can also be caught at Barceloneta and finish at Montjuic. You can catch the cable car at either end.

The Port Cable Car Barcelona is a favourite with kids

I must warn you for people who don’t like heights this is not an experience for the faint-hearted. We arrived at the Barceloneta entrance to the cable car. It was 36 degree’s the day we decided to take on the cable car. There was a 30-minute wait downstairs. The operators had mist fans working to keep people cool while waiting in line. this was greatly appreciated.

We were unaware that once at the top of the station there would be another 30 minutes wait. I often say anything worth doing is worth waiting for and it was true. The views from the top of the Barceloneta station were amazing, especially the Mediterranean Barcelona coast, The Marina with its superyachts and cruise liners and the Barcelona skyline were a sight to behold.

Only 2 cable cars traverse the Barcelona Port. One going in each direction. As you step on the cable car it is one of those heart in mouth moments when the car finally takes off and there is nothing but air surrounding you as you glide away from the tower. The total length that you cover is 1,303 metres across the harbour taking about 7 minutes from one side to the other.

We were lucky that we were at the front of the line when they let the 16 people in the cable car. We were able to position yourself near the windows. There is no seating available in the cars, standing room only. This provided us with some magnificent views of the city as you glide across the port of Barcelona

The Barcelona cable car slows when you reach Torre Jaume the centre tower as the cable tightens the cable car itself bounces a little causing some anxiety.  You pass through the station and slide on by and off you go again. The cable car Barcelona takes you right over the top of the trade centre the working port of Barcelona on one side. On the other side, you get views of Sagrada Familia, La Rambla, Arc de Triomf, Bari Gothic and the Columbus statue. The kids loved it and were excited the whole way across. As for Bec, she held on for dear life, maybe even put fingernail marks on the rails. The fact we had a fellow Australian saying “I wonder what would happen if the cable breaks” did not help.

A cable car Barcelona trip is fun for the whole family

Once you reach the Montjuic side and disembark more amazing views are on offer. There is a cafe/bar where you can enjoy a drink and the views. You can continue to the top of Montjuic on another cable car if you choose, The Teleferico Montjuïc. (more on that near the bottom) We chose instead to head up the road and visit the 1992 Olympic Games stadium. The Barcelona Port cable car is a good bit of family travel fun for the whole family. It is not to be missed, one of the many great things to do in Barcelona

Where is the Barcelona Port Cable Car:

Barceloneta is the nearest stop to get to the cable car Barcelona. Public Bus 39 Passeig Joan de Borbó/Plaça del Mar is the buses needed to get you closest. The Barcelona Hop on Hop Off bus tour also drops you at Barceloneta

The Hop on hop off Barcelona bus has the bonus of also having a pickup spot at the Montjuic end. This is great when you have finished on the teleferico Barcelona you can continue on the hop on hop off bus with ease.  There is so much to see in Barcelona from the weird and wacky places to the colourful Gaudi buildings, there is something for everyone.

Barcelona El-Prat is a hub for Vueling and Level airlines

Barcelona is a focus city for Air Europa, Iberia, EasyJet, Norwegian and Ryanair

Barcelona is served by a comprehensive local public transport network that includes a metro, tram and bus network

Buses in Barcelona are a major form of public transport, with extensive local, interurban and night bus networks

Barcelona has accommodation options for every budget from Hostels, to apartments and hotels rooms.

Hostels in Barcelona can start from as little as 15€ Euro a night for a shared dorm room.

Based on our fellow traveller’s reports, Travelodge Barcelona Poblenou is a popular 1-star hotel for budget travellers. it features free WiFi and a restaurant. Other options for your Barcelona trip on a budget include Centre Esplai Hostel and Hotel Barbara.

For families visiting Barcelona, we recommend The Bicycle Apartments is a top 4-star apartment featuring in-room kitchens and laundry facilities. Other options for your family trip include Novotel Barcelona Cornella and Hotel Constanza.

The is a big market for luxury travel in Barcelona. The Eurostars Grand Marina is a 5-star hotel with a restaurant and a poolside bar. Hotel Arts Barcelona and El Palace are two other upscale options for your holiday.

Hotels in Barcelona generally start from around $220.00 night for a double room 3star and increase incrementally as the luxury rating rises towards the 5-star average price of $408.00You can compare and book your stay on Agoda, Hotels.com, and Priceline

We hope this article from us here at Wyld Family Travel has you inspired to visit Barcelona in Spain. There are so many things to do in and see in Spain. For more amazing ideas on where to holiday in Spain click through to our Spain Destination Guide page for more brilliant inspiration.

More travel inspiration for your trip to Sapin