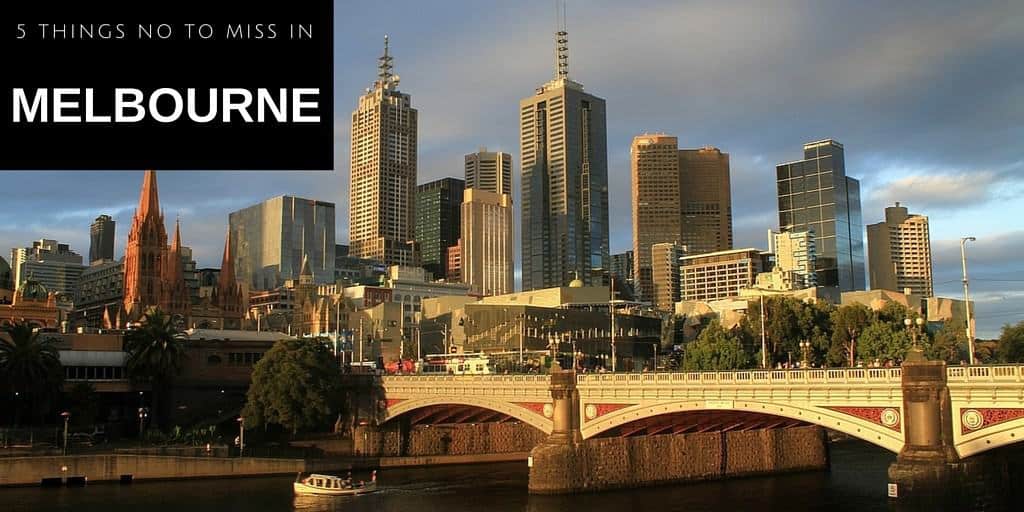 5 things not to miss in Melbourne? Actually more like 50 things you could do in Melbourne!

I Love Melbourne, there you go I have said it! Being a proud Victorian, Melbourne is our capital city and home to over 3 million people. It is fair to say Melbourne has come a long way since Ava Gardner famously described Melbourne as the “perfect place to film a movie about the end of the world”. Melbourne has been voted the world’s most liveable city countless times in many different polls worldwide.

It has even been voted the sporting capital of the world. Melbourne is an ever-changing dynamic city that is predicted to overtake Sydney as the most populous city in Australia in the next decade.

This would be poetic as it has overtaken Sydney in nearly every other category to be at the forefront of Australia today. Melbourne has a plethora of attractions to keep adults and kids alike busy, informed and engaged in sights, sounds, tastes and smells. It was very hard just to pick 5 things not to miss in Melbourne

Things to do in Melbourne: The Melbourne Cricket Ground

The Melbourne Cricket Ground or the MCG or even the “G” as it is referred to locally is the mecca of Australian sports. The G is located 1 kilometre from the central business district in Melbourne. The “G” is one of those iconic sports stadiums that stand’s rise up vertically encompassing the whole area

The MCG regularly reaches crowds of over 90,000 people many times a year during big-ticket sporting events. The MCG was also home to the summer Olympics of 1956. The stadium staged the opening and closing ceremonies and the track and field events.

1956 was the first time the Olympic Games had been held in the southern hemisphere. Those from Great Britain, South Africa and the subcontinent countries of India, Pakistan etc will know the MCG. They will know it’s one of the most revered sites in World Cricket. The MCG hosts Australian Rules Football for 8 months of the year.

Events such as the International Champions Cup where major football teams such as Real Madrid and Juventus play each July. Performers such as Madonna and The Rolling Stones have staged concerts on the hallowed turf of The Melbourne Cricket Ground. MCG events include concerts and special sporting events held regularly at the “G”. Early in 2017, I was lucky enough to see Guns n Roses along with 80,000 others.

It was an amazing MCG event.  Accommodation near MCG is plenty since it’s so close to the Melbourne CBD.  The MCG house’s the Australian Sports Museum and tours of the stadium itself are also available. It’s highly unlikely that you will be in Melbourne and there will be nothing on at the MCG.

Where is the Melbourne Cricket Ground

The MCG is located in East Melbourne just 1.2 Kilometers from Federation Square in the Melbourne Central Business District. The Jolimont and Richmond train stations provide easy access as do trams number 78, 70 and 48.

How do i get to the Melbourne Cricket Ground

The easiest way is to walk along the Yarra River and cross over one of the purpose built bridges for pedestrian access to the MCG and the Melbourne Tennis Centre.

The Old Melbourne Gaol has been standing in central Melbourne since the 1840’s. At one stage this 3 story bluestone building dominated the skyline of the young city of Melbourne.

The Old Melbourne Gaol bore witness to more than 135 deaths by hanging in its time. The goal was a symbol of law and order in the newly formed colony of Victoria. It was placed in the centre of Melbourne to intimidate and remind its citizens of where they could end up if they broke the law.

After closing down in 1924 the Old Melbourne Gaol was re-opened as a museum in the 1970s and is now one of Melbourne great attractions. You can visit the gaol and learn about its history, its prisoners and its day to day operations. The cells all have information about the criminals who lived her and possibly died here.

You can see the beam and the rope where the prisoners hung from. Displays of restraints, guns and memorabilia from the colonial times are also on display. The gaol runs a hugely popular ghost tour at night through the prison.

Recent additions to the Gaol include a visit to the Melbourne watch house which is located next door. The Watch House is where criminals and offenders spent time before being transferred to court or prison.

guard will lock up you in a cell so you can experience what it was like to be held in the watch-house. The Old Melbourne Gaol offers a fantastic experience for all and an easy inclusion in our 5 things not to miss in Melbourne

Family Travel Tips: Make sure you get the kids to don Ned Kelly’s armour for a picture. A picture dressed in the armour of Australia’s greatest bushranger is a highlight for kids.

Where is the Old Melbourne Gaol

How to get to the Old Melbourne Gaol

By train, the Gaol is a two-minute walk from Melbourne Central Station. By tram Catch the free City Circle tram no.35 to stop 7 on the corner of La Trobe and Russell Streets. There is no onsite car parking.

5 things not to miss in Melbourne: The Melbourne Star

The Star rotates at a leisurely 1 km an hour allowing you to enjoy the scenic splendour that’s laid out in front of you. The Star provides with a 360-degree view in all directions from Port Phillip Bay to the Melbourne central business district. As your journey progresses around the giant wheel you receive information through a P.A system on points of interest and the history of different sites you can see from your air-conditioned pod.

Family Travel Tips: Catch the free Melbourne City Circle Tram. The kids will love the old fashioned Melbourne tram. The tram stops at Harbour Town in the Docklands which is where The Melbourne Star is located.

Where is the Melbourne Star

The Star is located in the Docklands district of Melbourne

How do i get to the Melbourne Star

What not to miss in Melbourne: Melbourne’s Museums and Art galleries

Over time, we have been to the Tutankhamun and Titanic exhibitions at the Museum and in May 2016, we attended the Jurassic exhibition. These are world-class exhibitions that have toured the world to critical acclaim.

Since 2004 the National Gallery of Victoria has held what is known as its Winter Masterpieces collections. The collections have included Impressionists: Masterpieces from the Musee d’Orsay, Picasso: Love and War 1935–1945, “Napoleon: Revolution to Empire” and this year “Masterpieces from the Hermitage- The Legacy of Catherine the Great”. We attended this year’s exhibition and it was fantastic, with all the pieces on display on loan from The Hermitage in St Petersburg.

The Napoleon exhibition had many fascinating pieces with connections to this most famous Frenchman. Paintings by Rembrandt, Renoir, Rodin, Picasso, Monet and Bernini just to name a few are on permanent exhibition here as well as great Australian artists such as Hugh Ramsay, Tom Roberts, John Russell and others.

The South Bank of the Yarra River has been heavily developed over the last two decades. The Yarra River splits the city of Melbourne right up the centre.

South Bank has been transformed into a walking, jogging, strolling promenade along the banks of the Yarra. High rise building and restaurants adorn the pavement of the Southbank promenade. You can stop for ice cream, a cold beer or a meal at a 5-star Michelin rated restaurant.

Crown Casino dominates the skyline on South Bank. Crown is part of a worldwide gaming empire that started right here in Melbourne.  Crown is the largest casino in the southern hemisphere.

Apart from gambling, you will find famous retail stores such as Prada and Louis Vuitton. For families Cinema’s bowling and food courts in the crown complex. Further along, South Bank is the Melbourne Exhibition Centre which hosts all types of conferences and events year round. We have attended oz comic-con at the Exhibition Center.

During the year, there are also travel, boating, car and many other types of conventions that you are able to visit. Further along, you get to the South Wharf complex with its retail factory outlets and you guessed it, more bars and restaurants. Actually, one of our favourite restaurants in Melbourne, Munich Bauhaus is located here.

Bonus attractions not to miss in Melbourne

Luna Park is located on the St Kilda foreshore a few kilometres from the Melbourne CBD. Luna Park is home to the worlds longest continual running wooden Roller Coaster. The Scenic Railway has been running since 1913. Along with the heritage carousel is star attractions of this theme park of yesterday years. Now you will find a mix of new and old rides for the whole family at Luna Park. There are favourites such as the pirate ship and the haunted house. Read more about Luna Park in our feature article

Melbourne is a coffee lovers paradise

One can actually not talk about Melbourne unless we mention Melbourne’s food and drink culture. Melbourne is famous worldwide for its embracing culinary scene as a part of life.

While Sydney is locking out patrons from venue’s that serve alcohol unless they are in by 10 pm, Melbourne is extending trading hours and pushing towards 24-hour bars and restaurants.

“I like the fact that Melbourne always seems to support their chefs and promote them in ways I find really admirable”. -Anthony Bourdain

“I love coming home to Melbourne. The first thing I do is have a coffee. It’s just so much better here than anywhere else. It’s better than in Italy and I travel a lot. I crave it”. –Curtis Stone

Melbourne is obsessed with coffee and has one of the most sophisticated coffee cultures in the world. This 2.5-hour small group walking tour takes you through the “crop-to-cup” story to places that really care about the origin, roast and brewing of the bean.For more information and bookings clickHERE.

Melbourne is one of the best places on earth to get a coffee. So much so that you will only find 3 Starbucks in the whole city. Starbucks long ago packed up and left Melbourne with only a token few stores remaining for tourists. Starbucks realised its coffee could not cut it with the coffee lovers in Melbourne,

their cafe culture and world class baristas. Speaking coffee the world’s first McCafe from McDonald’s was opened in Melbourne. McCafe is now a worldwide phenomenon for Macca’s (That’s what we Australians refer to McDonald’s as).

We hope these 5 things not to miss in Melbourne helps you plan and have a great visit to Melbourne. If you are travelling around this great country of ours and you visit Sydney these top 20 things to do is a brilliant starting point! Below we have included 2 more posts from us here at Wyld Family Travel that we hope will help you get the most of your trip down here.

Where to stay in Melbourne:

17 thoughts on “5 things not to miss in Melbourne”