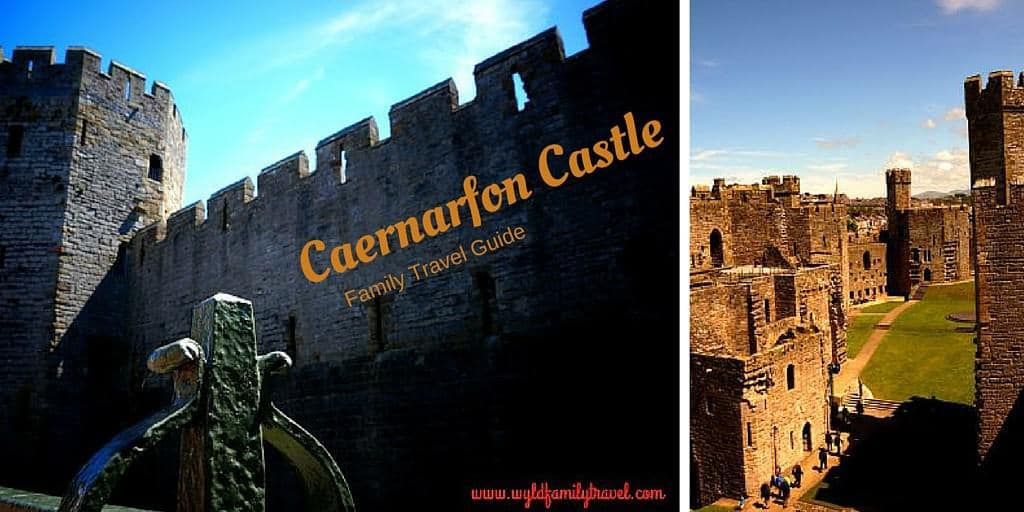 Caernarfon Castle is the largest of any of the Edwardian north wales castles we have been too. Caernarfon castle sits adjacent to the Menai straights. Today Caernarfon dominates the landscape of the town it is named after. Caernarfon Castle and the town walls are a UNESCO world heritage site. Caernarfon is a part of the designated area UNESCO calls “Castles and town walls of King Edward in Gwynedd ( Wales ). Our family loves visiting the UNESCO sites for their history. Caernarfon is a brute of a castle built to intimidate and control much like today’s modern weapons and armies, it was all about a show of force. 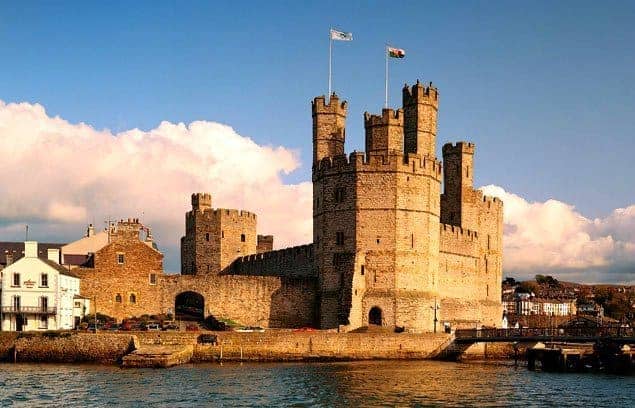 Caernarfon along with King Edwards’s other medieval welsh fortifications such as Conwy, Rhuddlan, Beaumaris and Harlech were built in the late 12th Century. This combination of North Wales castles played their part in keeping the Welsh subdued and the English in Control. When was Caernarfon castle built? Construction of Caernarfon started in 1283 the castle was constructed for defensive purposes but also as a seat of government. Caernarfon’s importance was confirmed with the birth of Edwards son, the first English Prince of Wales in 1284. Caernarfon was mostly completed in 5 years but bits and pieces of design construction and alteration continued on Caernarfon until 1323

The site on the Menai straights along with the town walls was strategic in Helping King Edward to control traffic along the waterways. This strategy can be seen with Edwards other north Wales castles which seem to have all been built on the coast or slightly inland with river access. The site had housed some fortification dating back to the roman occupation of Great Britain through to the Norman Rule of the lands. 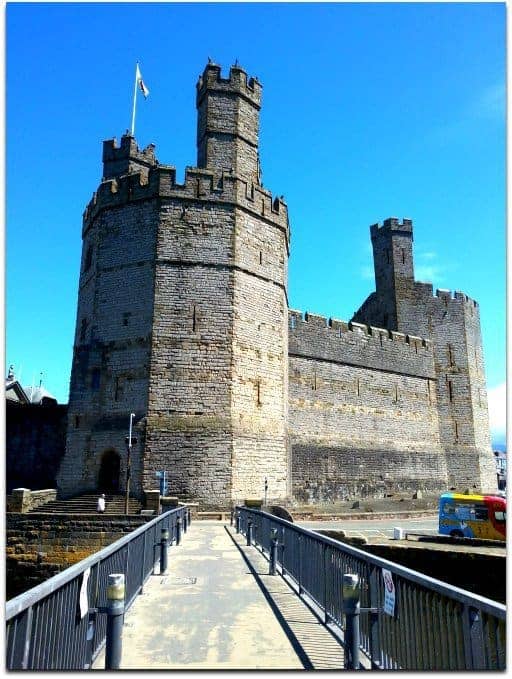 Caernarfon Castle shape and design took place as a result of the evolution of Edwardian castles. This castle borrowed heavily from the intimidating design of the walls at Constantinople that the crusaders faced on their way to the holy lands. Like many castles of its time It wasn’t actually finished. – 750 years later today one can still see examples of the incomplete structure

The estimated cost of the building work was astonishing – £22,000, more than the Treasury’s yearly income.

As legend has it Edward was not too popular with the Welsh people. Edward devised a plan to have his son born in Wales and win over the Welsh.

Edwards son titled  Edward of Caernarfon – was born in wales making him legitimately a Welshman, and was crowned ‘Prince of Wales’ in 1301. In practicality it meant a Welshman, ruling over his own people.

Edwards story-telling didn’t end there. It’s said that Edward I sold the story of  his son to the Welsh people as “A prince born of Wales, who could never speak a word of English”.

However, it was a smart piece of English propaganda  and it definitely didn’t mean that son Edward could only speak Welsh. The language of England’s nobility back then was still French, and so it’s almost no surprise that Edward of Caernarfon couldn’t speak English!

Caernarfon played its part for the English government in times of Conflict. The castle came under attack in the uprising of 1294-5, and again by Owain Glyndŵr in 1403-4, Caernarfon stood steadfast in its defence while under attack. It was never taken by force by an enemy. It was only in the Civil War that the garrison surrendered to the Parliamentary forces in 1646.

These days Caernarfon castle receives more than 200,00 visitors a year 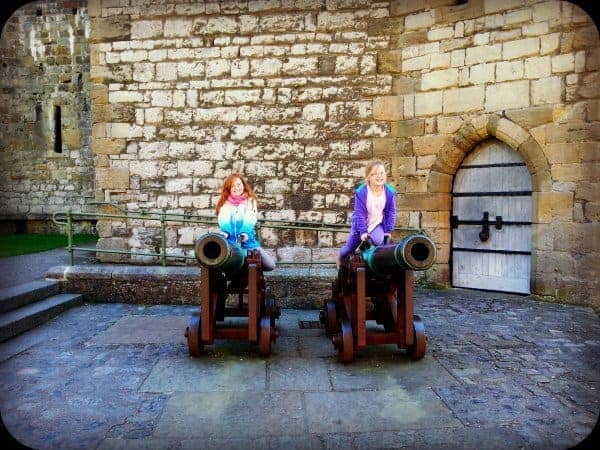 The girls having fun on the Cannons

We started out by walking around the castle just to get an idea of its size and to view its amazing walls. You enter the castle up the rampart which leads you into the centre of the main court area. The inside of Caernarfon Castle Wales is huge. I would say it has the largest inner area of any castle we have been. It’s designed like a figure 8 on the inside. It widens at each end of the castle and narrows in the middle. The inside area is all grass which was great for the kids to have a play on.and run around like kids do. Two old cannons from the period of the castle are on display in the courtyard. Our daughters loved sitting on them posing for pictures. As you can see above this makes for a great family travel photos.

A special feature of the Caernarfon castle interior is The Royal Fusiliers Museum. This museum takes you through 300 years of history of Wales oldest infantry. The museum displays uniforms and weaponry used during the day. A short film is presented for you to watch on the history of the Fusiliers. Our oldest daughter loved the museum and was quietly taken with the uniforms and weapons. 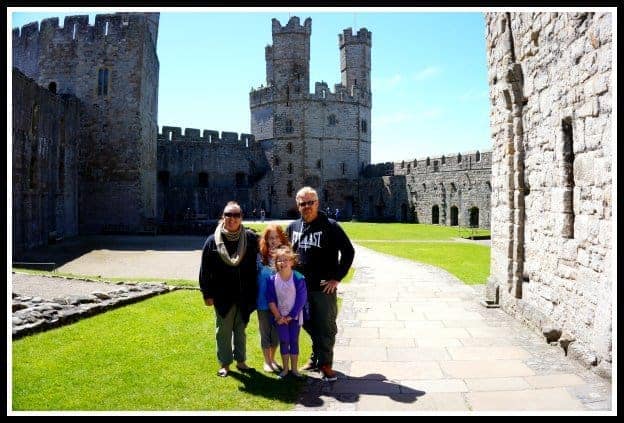 The walls are unique at Caernarfon castle Wales in the fact that you can walk 90% of the walls, it was amazing. The view provided into the bay were amazing. It would be easy to imagine the King’s supply ships sailing up the castle with supplies for the royal family. The stairways to the walls and towers were very steep and narrow such was the designs of the time. I would not recommend taking on the stairs if you are unsure on your feet.

My youngest daughter Marley who was 6 at the time basically had to climb them like a ladder. I can honestly say that walking walls and exploring the many towers and rooms of this castle was an unbelievable experience. My daughter and I explored all the towers and walls of the castle. What a site it must have been in the late 12th century when it was built with royals walking around, military guarding the walls, a town being built around the castle. 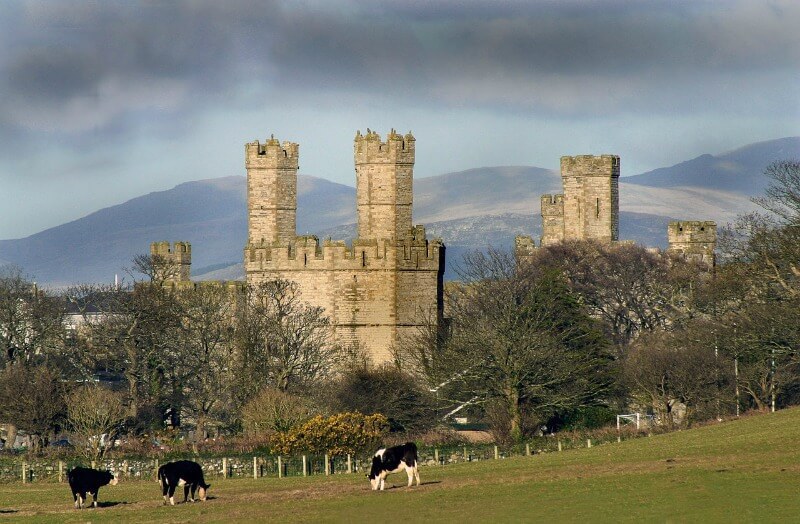 In the middle of the courtyard is a platform where the current Price of Wales, Prince Charles was inaugurated as the Prince of Wales in 1969 by his mother Queen Elizabeth of England. This tradition of having the King apparent crowned Prince of Wales dated back to Edward in the 12th century.

A short film is projected onto the wall inside a room at the castle and talks about the history of the castle which is well worth viewing for its information if you don’t have any knowledge of the castle’s history. Caernarfon is a great family travel destination for the whole family. Our family spent 2 hours at the castle

Plenty of open space inside the castle. Lots of places to explore, Interesting exhibits 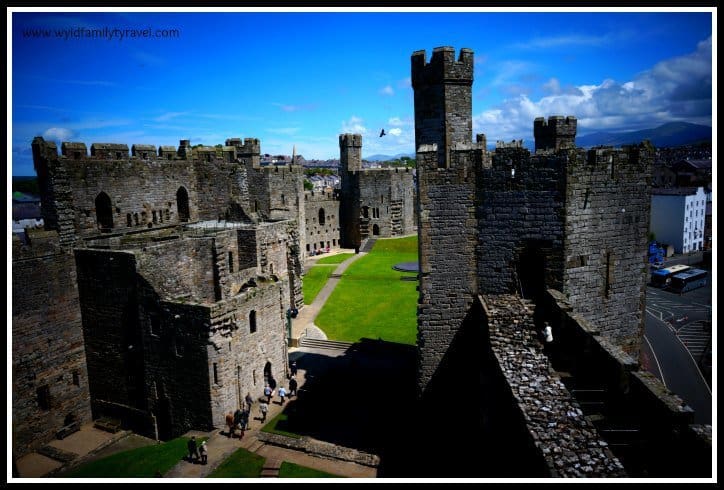 Not pram/stroller friendly. Stairs are very steep and can be slippery when wet. Poorly lit stairways could pose a danger for children. The weather in North Wales can range from freezing cold to sunny make sure you bring  good outdoor jackets

Directions: Where is Caernarfon Castle

North Wales is the location of Caernarfon Castle

Caernarfon Castle Wales is very accessible from the beach town areas of Towyn and Rhyl.

Places to visit near Caernarfon

Close to Caernarfon, you will find the Ty Coch Inn. Voted the world’s 3rd best beach bar in the world. The kids will love playing in the sand and paddling their feet in the water while you enjoy a drink. I rate the Ty Coch Inn a great family travel spot. Read our review on our visit to Ty Coch Inn here. A novelty is a visit to Llanfairpwllgwyngyll. It is the town with the world’s longest name. It is very popular to have your photo taken under the sign at the railway station.

For your reading information, we have included two other articles from Wyld Family Travel on North Wales. Please click on the images to be taken to the articles. 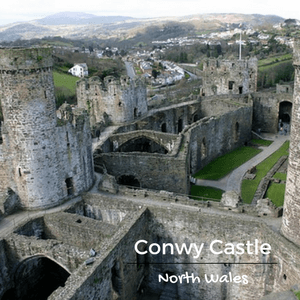 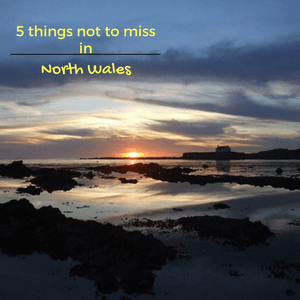