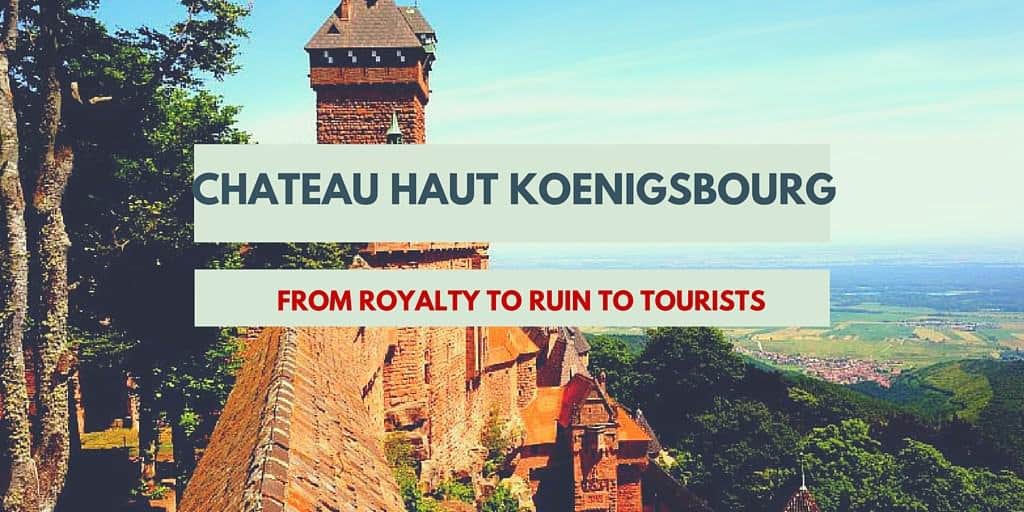 Chateau Haut Koenigsbourg sits up on its mountains at an altitude of 800 meters like a King overlooking his kingdom. What a kingdom he had to gaze upon, the Alsace Region of France is ripe with grapes, fruits and all types of produce growing everywhere on the upper Rhine plain. Picture perfect towns such as Strasbourg, Colmar and Riquewihr. are some of the best places to visit in Alsace. Amazing towns seem to be around every corner. It is like being in a fairytale, there is just so much beauty. 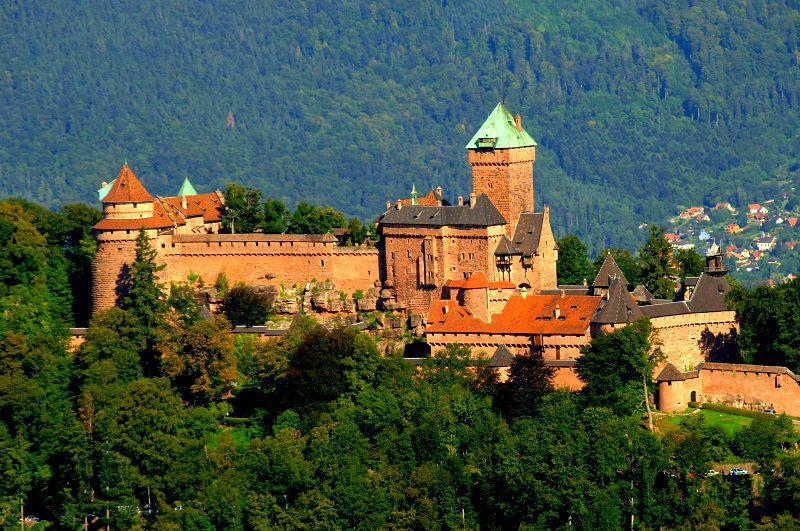 The Buntsandstein Rock where Chateau du Haut Koenigsbourg sits today was first mentioned in history in 774 in a deed issued by the Frankish King Charlemagne. It was initially the site of a monastery. The exact date of the first ever castle built here remains unknown for sure; a Burg Staufen was documented in the history books in 1147. The name Koenigsbourg was first mentioned in 1192 (The King’s Castle) in reference to the family who owned it. 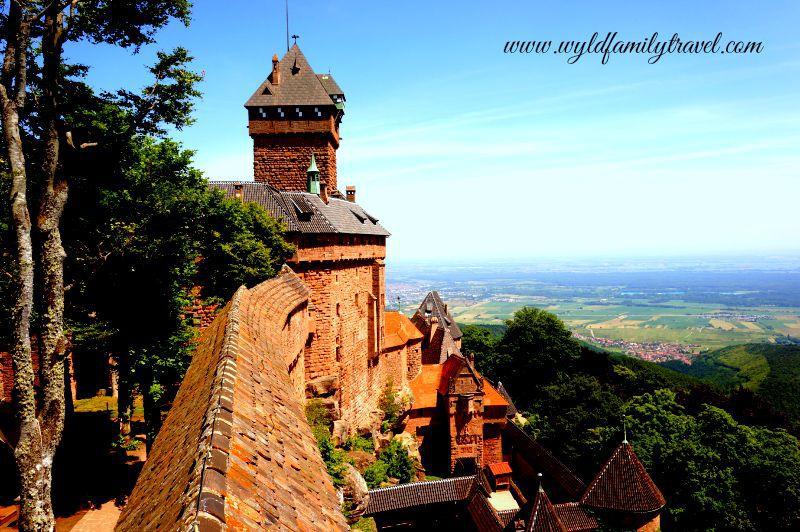 In 1462, the Chateau du Haut Koenigsbourg was set ablaze by unified forces of cities of Colmar, Strasbourg and Basel. The  Chateau Haut Koenigsbourg had been used by robber barons as a hideout and their behaviour had become too much for the neighbouring powers.

The Chateau de Koenigsbourg fell under the banner of the Hapsburg Emperor Frederick III in 1479. In 1663 during the thirty years war, the Imperial castle was besieged by Swedish Protestant troops. The troops held out in Chateau du Haut Koenigsbourg for 52 days waging war before being forced out, but not before Koenigsbourg castle was looted and burned by them on their retreat from the mountain. 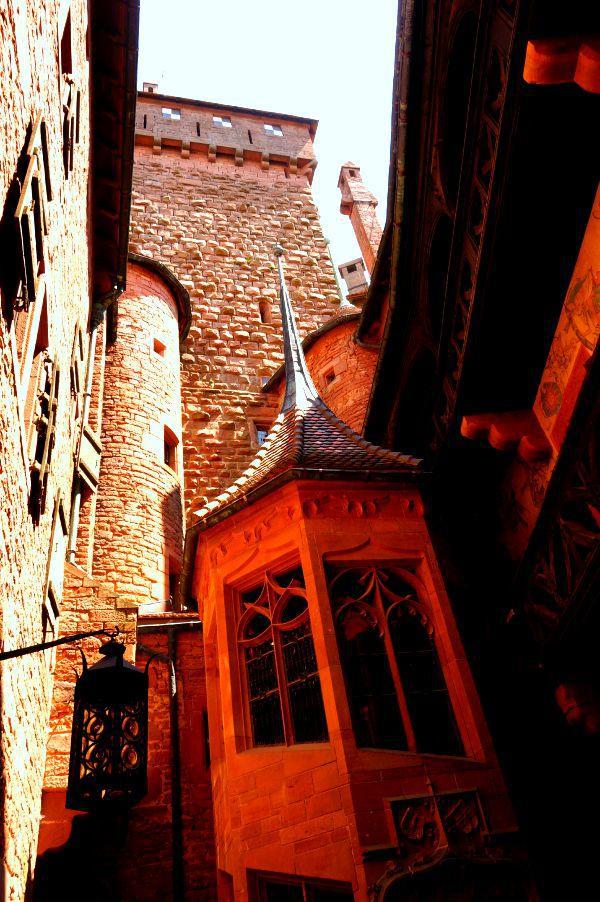 Chateau du Haut Koenigsbourg remained in ruins for several hundred years after the war. No one bothered to rebuild it as it slowly slipped away from view behind the encroaching forest that paid no respect to its Royal past or place in history.

In 1865, the ruins of Chateau Haut Koenigsbourg were purchased by the local town of Selestat. In 1870 the region of Alsace was incorporated into the German Imperial territory. The citizens of Selestat bequeathed the Chateau de Koenigsbourg to the German Emperor Wilhelm II in 1889. 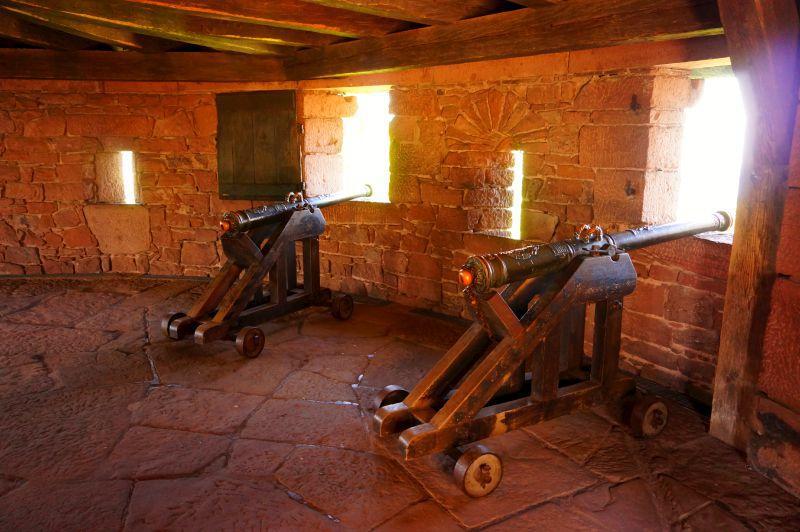 We made the trip to Chateau du Haut Koenigsbourg from Freiburg in Germany by a car after arriving in Alsace via Strasbourg. The drive took a little over an hour to reach. The road leading to the Haut Koenigsbourg castle passes through a forest and then begins a series of sharp hairpin turns as you climb upwards. The road is very windy as our daughter Willow can attest to, car sickness got the better of her as she vomited in the hire car.

These features all sit in the shadow of Koenigsbourg castle’s towering defensive walls which cover 270 meters in length.  It is like a castle inside a castle so that any invaders would be flanked on both sides if entering the castle grounds and could be dealt with accordingly as they moved towards the main entrance. You must climb the stairs and cross the drawbridge to enter the main section of Haut Koenigsbourg castle.

The first floor contains many of the living quarters that the Royalty of the time lived in. The furniture on display is ornate and typical of the medieval period. Some of the rooms in this section were amazing with the elaborate wall paintings of the Royalty who lived at Chateau du Haut Koenigsbourg, and weapons on display. The full armoury that is linked to Haut Koenigsbourg castle’s past is also on display in this section of the Chateau.

Our daughter Willow loves armouries for some reason. In all castles we visit, Willow always wants to go to the armoury. Maybe our little read head is channelling her inner Merida (Disney character from the movie Brave). Marley, on the other hand, enjoyed sticking her head out through the attacking holes that lie in the fortified walls. Castles seem to evoke a spirit of adventure and exploration in our kids especially Marley as she rushed from room to room. Rebecca thinks the kids give us the look when we are at castles as if to say “why don’t we live here” and “when are we moving in”. 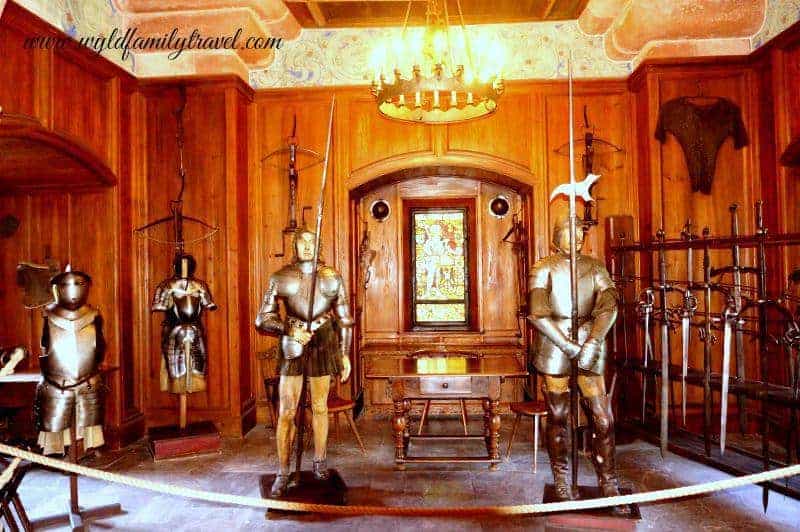 The second floor contains the bedchambers of the Royalty that lived here at Chateau de Haut Koenigsbourg. The Empress and Kaiser’s bedchambers are the feature of this floor. The rooms are very regal with many features that suit the Royalty of the time albeit for toilets which in those times were situated hanging out over the walls for the great drop!

I recommend that you grab a drink or a bite to eat outside the castle at the café on the road that has amazing views of the valley and small village’s that live in the shadow of Koenigsbourg Castle. Alsace is an amazing region with many things not to miss. 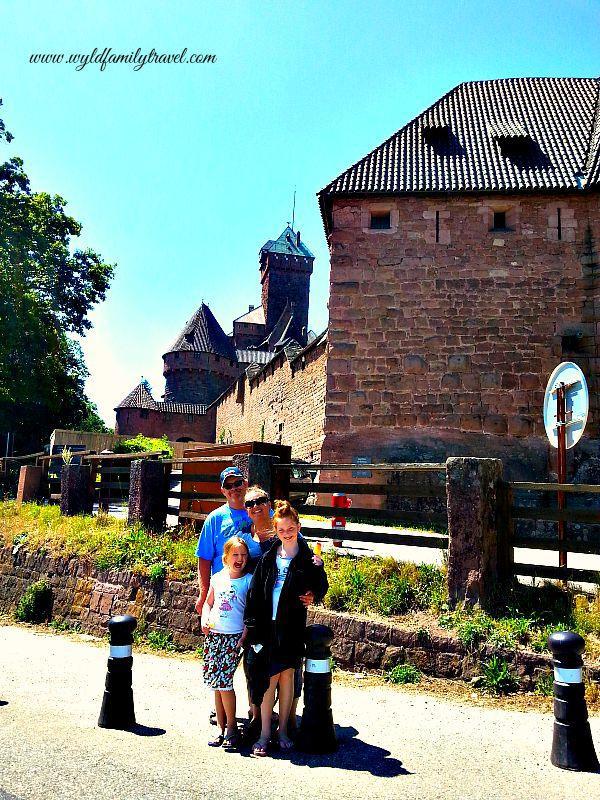 Booking.com for all your Alsace accommodation needs

We hope you enjoyed reading about our trip to Chateau Haut Koenigsbourg as much as we loved being there. Here are two more posts from us here at Wyld Family Travel that we hope you enjoy!

More about the Author

Mark Wyld is a father, Husband and traveller. Having been to over 30 countries worldwide I think I know a thing or 2 about travelling with kids. I have been writing about travel on our website for the last 4 years and have featured on numerous other websites. When I am not talking, dreaming and planning travel I can be found working in disability support.

Let Wyld Family Travel and Viator help you with all your tours in the Alsace region of France. Click for more details