Is Conwy Castle the mightiest in North Wales 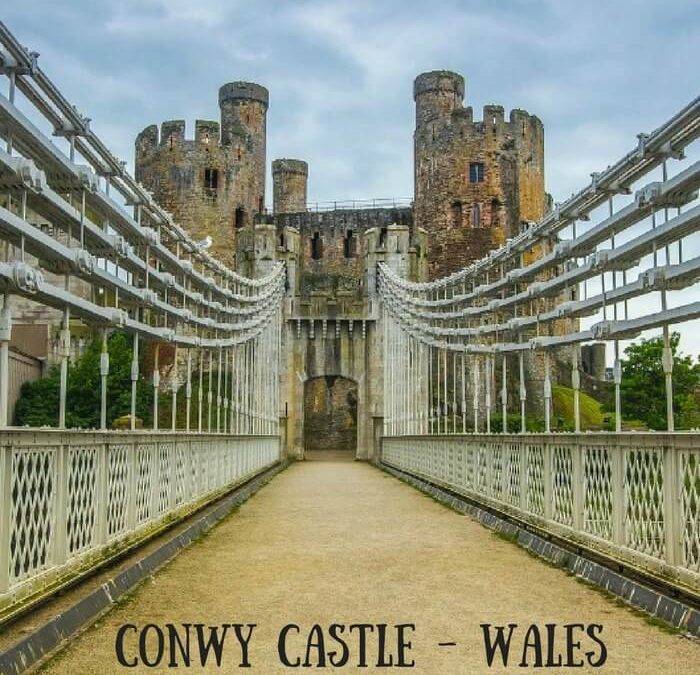 Share
Flip
Tweet
Pin
Share
Reddit
Conwy Castle holds a special place in my heart and memories. You see Conwy was the first castle I ever visited. In May of 1999, I first laid my eyes on Conwy Castle. Being Australian, I was awe of this behemoth of a  structure that stood before me. I had never seen a castle before let alone one that was still standing tall and proud 700 years after it was built. This for me started a fascination with castles that still burns strong in me today. In June of 2015, I was able to return to Conwy once again with the rest of Wyld Family Travel in tow to experience one of the finest looking castles I have ever seen. Conwy epitomises what historically castles are portrayed like in movies that you would have seen. It’s not hard to imagine the archers on the walls of Conwy. Canons firing on encroaching forces sieges underway. It’s often said that Conwy is the greatest and most magnificent of the  North Wales castles ever built. I can not disagree. 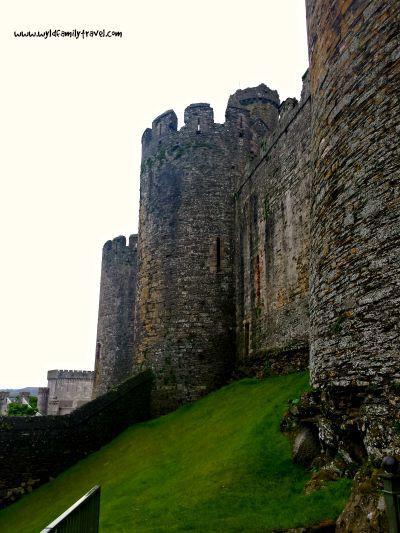 The giant walls of Conwy castle that greet you

Conwy dominates the landscape like nothing else. As the town of Conwy comes into view the castle rises up from the rock it sits on to greet you as you enter the small seaside village. Conwy the township is actually still enclosed by the walls that were built with the castle as a protection for the town. You may notice the Conwy suspension bridge which sits next to Conwy Castle. The Conwy Suspension bridge was built blend in with the style of the castle. 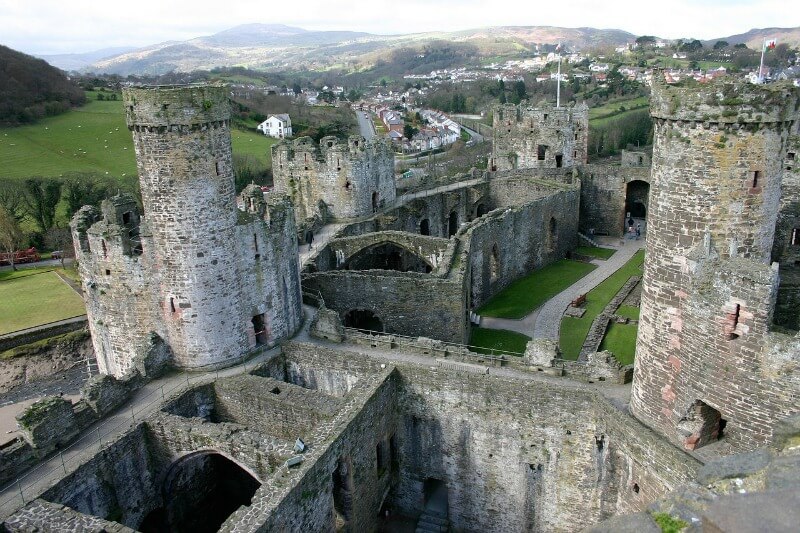 One of King Edwards greatest castle’s is Conwy
Conwy Castle History: The medieval castle that is Conwy was built by Edward 1st between 1283-1289. Conwy was one of a handful of the iron ring castles Edward 1st built during his conquest of the welsh lands. The castle was built to intimidate any potential uprisings by the welsh people. Conwy played a part in several wars over the years following its construction. It withstood a siege by the Welsh in 1294-1295. It was used by Richard 111 for safety in his ongoing dispute over the English crown with Henry Bolingbroke ( Bolingbroke went on to be Henry IV king of England after Richards abdication). In 1401 two Welshmen pretending to be carpenters gained entry to Conwy and took control letting the welsh Rebels occupy the castle for 3 months. 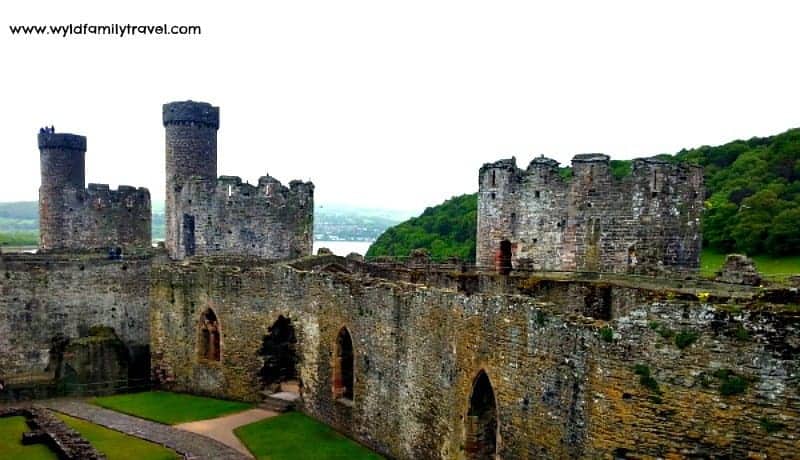 The most famous King of them all Henry the 8th conducted restoration work on Conwy twice during his reign. At this period in time, the castle was being used from everything from a prison to a depot to a guest residence. In 1642, The English civil war broke out between parliament and Charles 11 loyalists. A Charles loyalist defected to the parliament and the town and castle fell under their control.
Here is $30 off your next nights accommodation with Bookig.com. Our gift to you. Click here!
After the civil war ended the council of state ordered the castle to be slighted to be put in a state where it could no longer be used for military use. In the next decade, all the iron and lead was removed from the castle, In the 18th century, the castle appealed to artists who painted picturesque landscapes. The tourists once again became aware of Conwy and started visiting the castle. Restoration work has been ongoing for the last 150 years. Conwy Castle was declared a UNESCO world heritage site in 1986. In 2015, 180,00 people visited Conwy castle. 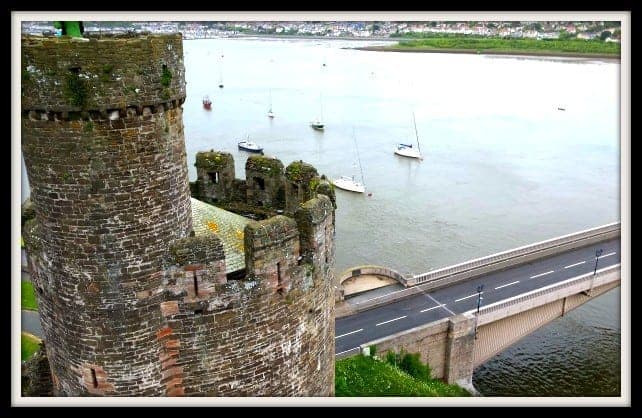 The Conwy River which flows into the Irish Sea

Features: Entry to the castle is via the tourist centre that is located adjacent to the castle. As you make your way out of the tourist centre you walk along a path that runs adjacent to the walls of the castle. This walk is truly amazing. You feel so small with walls towering up like a vertical cliff face intimidating all that dare enter through the Barbican ( fortified gate). Once inside the castle, all the old building and rooms are almost completely destroyed. The castle is well sign posted with information. The signs tell you what the parts of the castles were used for. Our kids really enjoyed exploring the towers of the castle. There were races to the top happening. I must say I don’t recommend this it could be pretty dangerous There are 8 towers in all that can be accessed with different levels that can be explored on your way to the top.

The views from the top of the castle are stunning looking inland down the river or out to sea over the Conwy Bay, Conwy Castle walls extend to enclose the whole town. The walls of this North Wales castle stretch for 1 km around the town and can also be walked. Conwy is one of the most beautiful walled cities in England. Time has not diminished the impressiveness of Conwy Castle. Conwy outer ward contains what was once a great hall, chambers and kitchen. The castle was made up of two inner wards or areas of its original design. This area now is just lawn as the building that was present in the medieval days are long gone. In its day, this area would have been much narrower with building on each side that contributed to Conwy’s day to day activities. It would have been a busy area with soldiers, servants and craftsmen working. The inner ward at the far end of the castle was much smaller and more personal. The inner ward of Conwy castle was the domain of the King, Queen and any important members of the royal family. This area featured the private chambers of the royal family and a royal chapel. 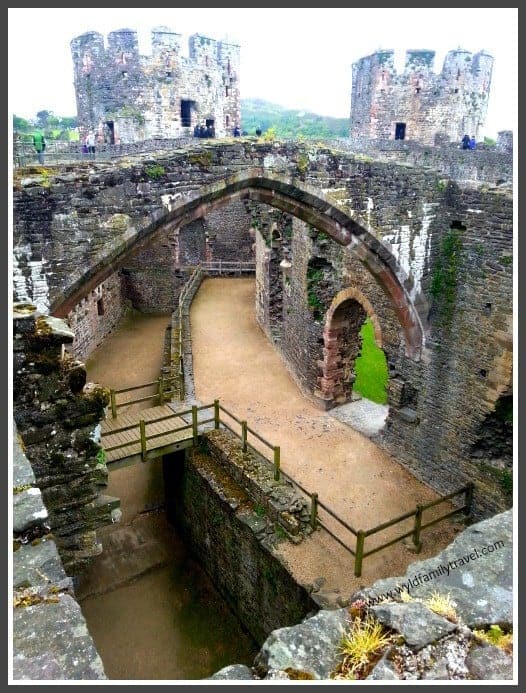 The Great hall of Conwy Castle. The location of Royal banquets

The great hall which lies in the outer ward would have been an amazing sight in its time. It was easy to imagine parties, dinners of state, the king and Queen being introduced to their guests. Feasts would have been served with a huge fireplace that is still present in the side wall keeping guests warm on those freezing Wesh night. The North Wales Castle layout and rooms structure lies unaltered from its original design 800 years ago. The floors may be gone the roof may be gone, but its still easy to see the layout of this grand castle. Conwy is giant among Castles and should be on all castle lovers lists.
Pro’s for Children: Plenty of exploring to do. There are towers to be climbed. Some rooms have 3D projections (a fire in a fireplace). The gift shop plenty of pens, pencils, costumes, books all the things kids love

A family moment at Conwy 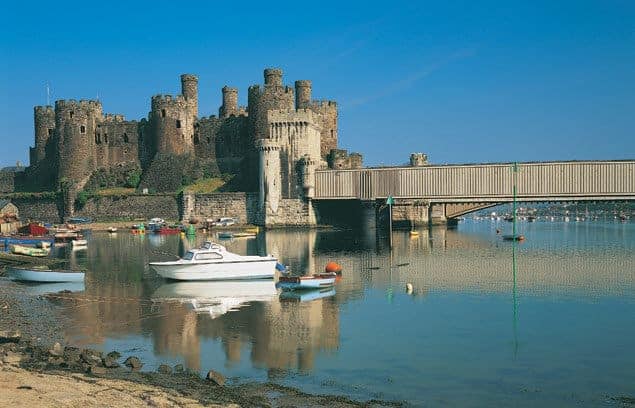