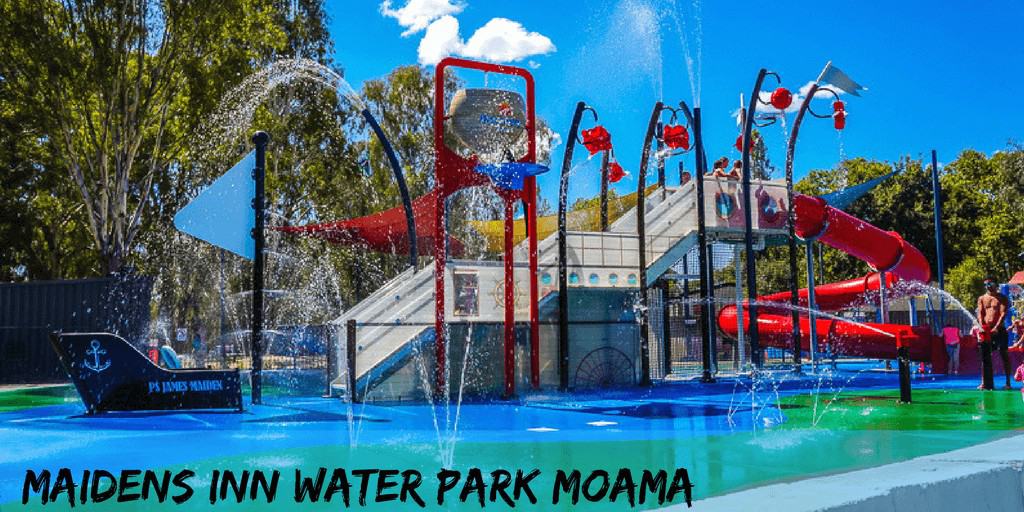 The words just popped out of the email larger than life. As I read it out to the girls there were gasps of pure excitement from them. Not only were they invited to the Grand Opening of the Discovery Parks Maidens Inn Waterpark it was nearly 5 hours away in Moama, New South Wales, Australia. It was technically afamily holiday they said but it was also a road trip for a girls weekend!

Unfortunately, Mark was working on that weekend and was unable to come with us so we decided that Nanna may want to come with us instead. None of us had been up to see the Murray River at Echuca-Moama before (Nanna could not remember) so it was a great way to see it all together.

The Grand Opening was going to be held on Sunday the 26th of February, between 11 and 2 pm and we were hoping for a wonderful day. As the Discovery Park Maidens Inn Water Park had the Grand Opening on the weekend the park was fully booked out so we stayed over the border at Discovery Parks Echuca in one of their luxury cabins for the weekend. Both the girls were even happier…2 states in one day! (Just in case you are unsure Echuca is in Victoria and Moama is in New South Wales. The mighty Murray River separates the two states)

The girls were both up early and very excited on the Sunday morning. Before I knew it we were heading over the Murray River to the Discovery Park Maidens Inn Moama. As we arrived I parked the car out the front and we walked into the park. I was yet again amazed at how beautiful the park was maintained. All the lawns were immaculate and it was so clean. I made my way to the reception area just to make sure they knew we were in the park as we were not staying there. I was directed over to a shaded area to wait for the Grand Opening. Mum found a table for us to sit at and some chairs while the girls went to the toilets to get changed into their bathers. There was a pool just near the area where we were sitting so they used a small toilet there. There was plenty of hustle and bustle around us with food caravans arriving, the petting zoo being set up, a display boat to have a look in and the ice cream truck finding the perfect spot.

As they were changing I took the time to speak to Dana from Discovery Parks and ask her about the Grand Opening. Discovery Parks took over the Maidens Inn Moama about 12 months ago. Normally they change the park’s name to the town they are in but the name Maidens Inn was so recognisable that they decided to leave it as it was. I thought this was a lovely gesture. As we kept chatting the girls came over and Dana explained to them that the Water Park was designed to look like a paddle steamer that is well known to this area and the Murray River. Dana then showed us the table where the girls got a hat, a bottle of water and lathered some extra sunscreen on. This was a fantastic idea as our wish of fantastic weather had come through with a forecast of 32 degrees. Perfect!
As we settled into the shaded area right in front of the Water Park, eagerly awaiting the 11 am turn on time I looked at what was around. It is so well set out for kids. The Water Park also has a jumping pillow, a playground, a grassed area and a shaded area right near it. There is also a pool set back from the water park. The areas were fenced off that had water in them to keep the little ones safe and comply with Australian standards. This is definitely a place kids could spend all day having a fabulous time while their parents could sit comfortably in the shade and watch them.

11 am was nearly here and the girls had joined the line to watch the first lot of water come out of the spouts and be one of the first up the ladder to go down the water slide. All the kids were so excited! Smiles from ear to ear where everywhere (I think even some of the adults had them too).

3…2…1 and they were all off and racing at Maidens Inn!

Water was coming from everywhere. Most of the bigger kids raced up to be the first down the slide and some of the littler ones were happy to get wet from the spouts of water at the front. There was also a little slide up the back that I saw plenty of little ones have a go of before they worked up the courage to go down the big one! Squeals and laughter were all you could hear at that stage. I heard my youngest scream ‘Watch me Mum’ as I saw her disappear down the water slide to be greeted at the bottom with a huge grin before running off to join the line again. Willow had been up a few times but I had not seen her for a little bit. I ended up finding her at the petting zoo that was set up with a very friendly little rabbit she was holding. I was amazed at the wonderful community event that Discovery Parks Maidens Inn had put on for the opening. Not only was the Grand Opening for the park’s guests it was open for everyone living near the park. Everyone was having a chance to check it out and everyone was loving it!

After awhile Marley was ready for lunch. I gave her some money and told her to go and get what she wanted to eat from the food trucks. Willow was not quite ready at that point as she had met a friend and they were having a great time together. Marley returned paper bag in hand waving her money around saying ‘It was free Mum, free, free chicken nuggets’ She was just about to go into complete meltdown…free nuggets, free hot dogs and FREE ICE CREAM…suddenly the world was her oyster and she was completely won over! Willow finally joined us for some lunch and mum opted for a sausage in bread with onions. We all sat around our table eating, chatting and laughing at the awesome day we were having.

Both the girls took off after a short rest after lunch to go back on to the Water Park. I took the time to have a look around at the facilities that were near us. The Discovery Park Maidens Inn is just beautifully kept. The pride that goes into the work is amazing and it really shows. The toilet block that all people at the Grand Opening were using was so clean and tidy even though it had been going for a while at this stage. I had a look at the shady areas and the place where guests can leave their boats on the river. It was all so neat, tidy and easy to use for the guests. I planned on looking around a little more but I was not sure what people would think of me wandering around when we weren’t staying there! So I just went to the places where I was not intruding on someone’s family holiday. There is just a place for everyone. Places you can sit and read a book quietly, plenty of play equipment for the kids, a place to park your boat, ample seats to sit by the pool, perfect views of the Murray River and now the magnificent water park is just the icing on the cake!  Even though we did not stay at this park I believe it would be brilliant accommodation on the Murray River for families.

Bring the kids to enjoy the amazing facilities Maidens Inn has to offer. Explore the surrounding area, The Port of Echuca, The Holden museum or play some golf.

As 2 o’clock approached there was no way I was getting the girls off the Water Park. We ended up staying until about 4 in the afternoon. Even though the Grand Opening was only from 11-2 we were all allowed to stay and enjoy it for as long as the kids wanted! Discovery Parks Maidens Inn Moama really know how to throw a Grand Opening! It was a brilliant day for our family and for the community in general. The girls are already asking when are we going back to have another go and stay in another one of their beautiful luxury cabins!

We were invited to attend the Grand Opening of Maidens Inn Water Park as a part of a review process by Discovery Parks. Although our stay and visit were hosted, all opinions in this article remain my own and I was in no way influenced by Discovery Parks.