We had previously ridden in a tuk-tuk on our last trip to Lisbon, Portugal. Being something that one normally associates with South East Asian countries it was a novelty for our kids. There was plenty of laughter and every time we saw one after that they wanted to get straight on it!

When checking out things to do in Faro on the Algarve, we came across Far Eco Tuk Tuk. We immediately knew this was something the kids would love. 2 hours in a tuk-tuk, what kids would not love this? The amazing Sophia agreed to meet us at Faro Harbour. We were staying 25 kilometres away in Albufeira. In our previous correspondence, Sophia had sent us a map of free car parking close to the meeting area. We had never driven overseas before and we had not been to Faro so this map was exactly what we needed to make getting there easy. This is the kind of customer service that really stands out for us.

As we approached the meeting place we saw Sophia come around the roundabout in the tuk-tuk. This straight away brought on a fit of excitement from the girls and as Sophia went past us (to get onto the right side of the road to park the tuk-tuk) both the girls were waving to her. As she pulled up her smile won the girls completely over! We all introduced ourselves and then it was down to business…where was the closest toilet before we started the tour! Luckily Sophia knew exactly where to go and led us straight to it. Then it was back to the tuk-tuk and we were ready to go! 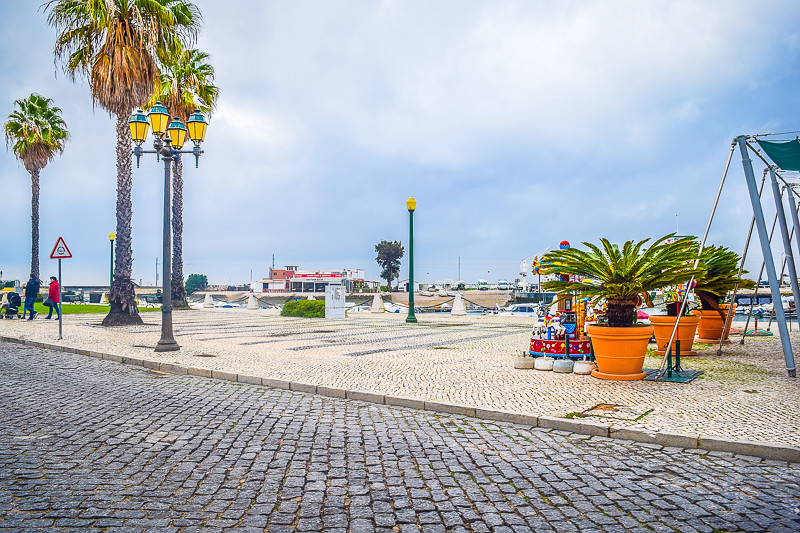 The tuk-tuk was designed to fit 6 passengers and as I later found out was electric with a top speed of 35 km an hour. We all climbed into the back with two on each side. We found that there was plenty of room and it would easily and comfortably fit more people in it. Marley and Willow were excited to get going. The weather was not the best but it was not raining at that stage. 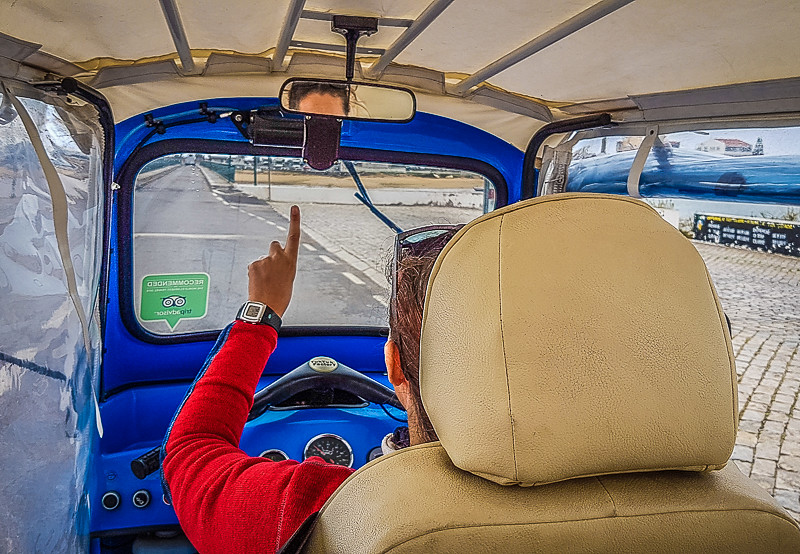 Off we go with Sophia

The rain would not be a problem though as the tuk-tuk is fitted with see through plastic zip up sides that would protect us if we needed it. We were all dressed well for the weather but Sophia was worried that once we got going we may have gotten a little cold so she had placed a couple of blankets in the back for us to use.

As we had never been in a tuk-tuk for a tour before and I was worried that we would not be able to hear Sophia as it would be too loud but that was absolutely not a worry as she was able to speak to us while the tuk-tuk ran as it was so quiet! It was easy to talk to Sophia and ask questions with no worries as we cruised the streets. We headed off around the Old Town area of Faro. Sophia explained to us that Faro like most towns and cities on the Iberian Peninsula had a Roman and Moorish past. 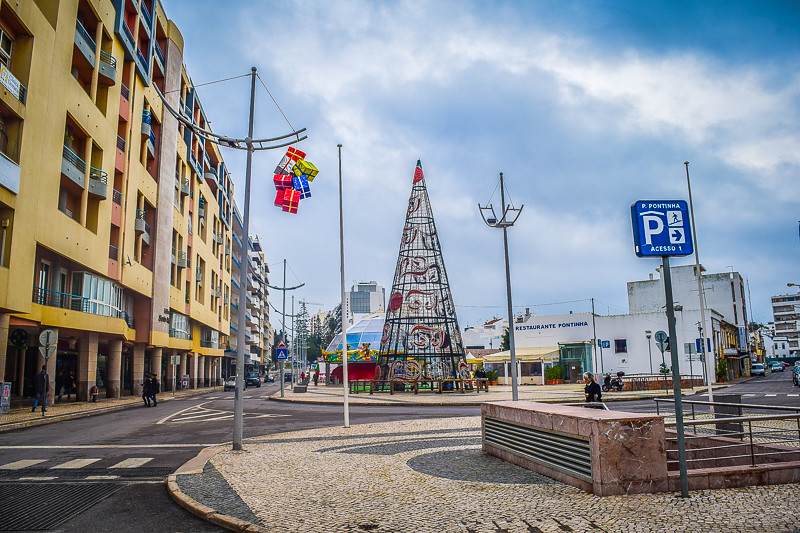 Some of the streets were so small I was worried about getting through them but the tuk-tuk just glided right through them. Sophia pointed out the sites and explained to us little interesting pieces that you may not have gotten on a big tour. If we wanted to slow down or stop for a picture it was no worries. There were times that we did pause or pull over to allow cars to pass us through the small streets. Seeing everything was easy too as the cover on the tuk-tuk was clear so we got a great view of everything. 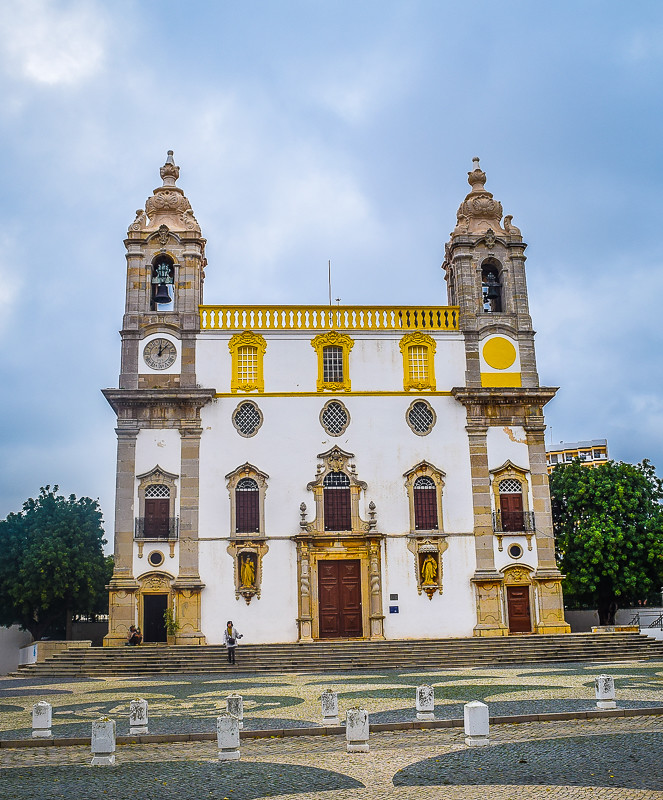 We stopped at the Faro Cathedral as it was a place that Sophia thought that we would like to see the inside of. She found a safe place to park the tuk-tuk and we headed inside for a look. She was absolutely right, while the outside was quite plain and ordinary the inside was stunning. Bec bought some little handmade hair ties for the girls that were made at the convent as a donation to the church and we headed back to the tuk-tuk. Unfortunately, we were not allowed to take pictures of the inside of the church. 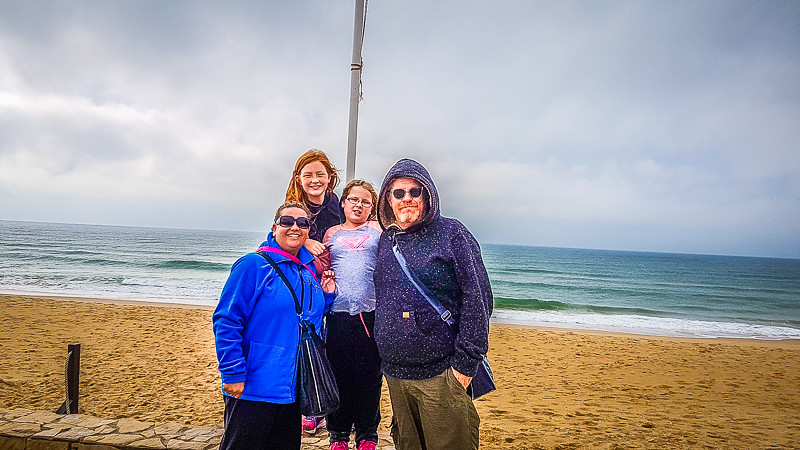 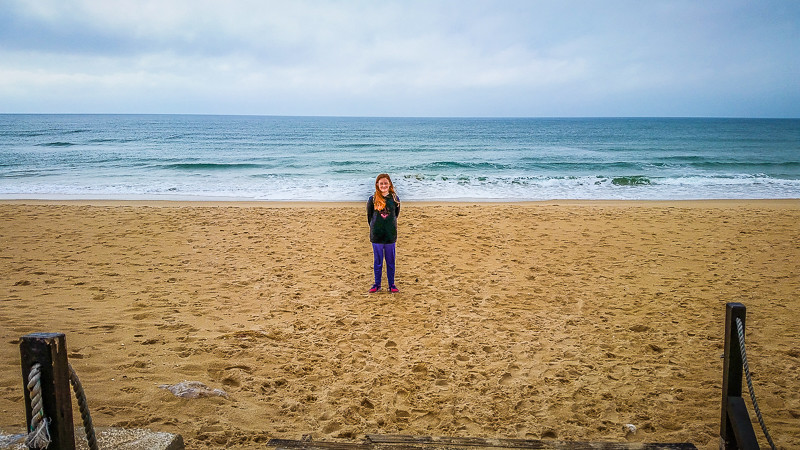 The Algarve is famous for its sandy beaches

From there we headed out onto the open road! Other drivers are obviously used to seeing Sophia in her Far Eco tuk-tuk as most cars just went passed us or waited patiently behind us until it was safe to go. The girls loved waving at the passing cars and it was rare for people not to wave back at them. It was making them laugh so much…which then made us three adults laugh as well. 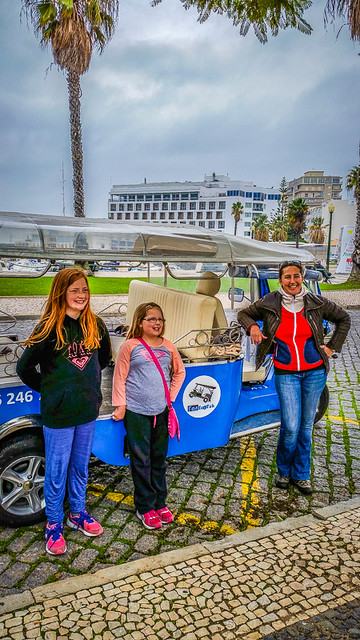 The Girls and Sophia after the tour ended.

We went through the area where some of the nicest and most expensive houses are (there was an amazing smell coming from one house that we all agreed was making us hungry!) Sophia told us about how the areas had been divided up and what most people earnt in Faro. From there we went past the airport that has to be extended due to all of the traffic coming in and out now. This is where we really got to hear about Sophia and her life. She told us about her family and what they like to eat. As we were passing roadside fruit sellers Sophia pointed out her favourite orange seller and said that he always has the best and most tasty oranges for sale.

He gave her a big wave on the way past and the girls thought it was wonderful. We were passing the wetlands on one side and we were hoping that maybe a few flamingoes had stayed behind but as much as we tried to spot some they had all left already. As we approached the one-way bridge to cover over the wetlands to Faro beach Sophia told us that she loved to come out here and catch a type of shellfish for her dinner sometimes with her husband. She also told us it was a great place to come in summer for a swim or out on a boat. The light turned green for us and we were off!

Over the bridge was parking and access to the local beach. We stood chatting to Sophia about life in Australia and how similar this beach looked to ours at home while the girls ran around and played in the sand. In the parking area, there were plenty of motorhomes and cars with trailers for boats and kayaks. In the summer I bet it would be bustling with so many people enjoying all the activities you can do out there. We hopped back in the tuk-tuk n that is when we needed the blankets that Sophia had packed for us. The wind had picked up a little bit and once we got back out onto the open road it got cold. We all snuggled in and enjoyed the ride back to the harbour.

Where do we stay in the Algarve

We stayed in the 4 star Aparthotel Paladim. Our apartment was self-contained with cooking facilities. The complex had a pool, bar, restaurant and 24-hour reception just to name a few things. Located adjacent to a shopping complex and few hundred meters from the beach, this is the perfect location

Book your stay at the Paladim HERE.

All in all, we really enjoyed our time with Far Eco Tuk Tuk and the tour was great. Most of all we loved having Sophia as our guide and her beautiful personality. She was such a warm, friendly and kind person who did everything she could to help us on the day and in the months before we got to Faro. All of this makes Far Eco tuk-tuk a brilliant way to see Faro.

Our 2 best beaches in the Algarve Portugal