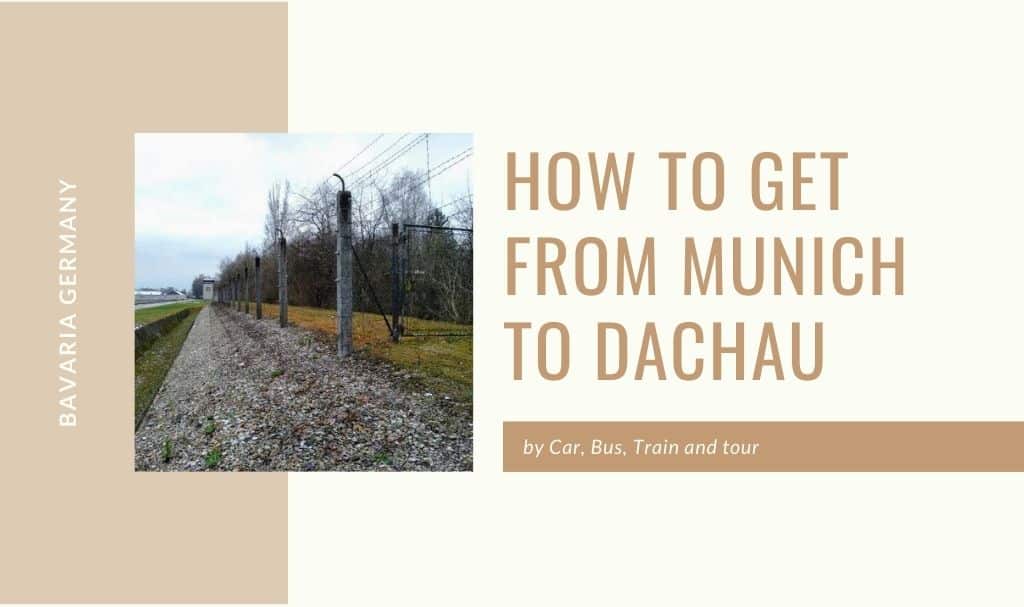 The Dachau Concentration Camp Memorial site is located on the outskirts of Munich, Germany. Getting from Munich to Dachau is easy. No visit to Munich is complete without a day trip to Dachau.

Munich to Dachau Concentration Camp is a must day trip

Dachau was the very first concentration camp opened on German soil. In 1933 the camp was opened by Heinrich Himmler. In the first instance, the camp was designed to hold political prisoners. The type who did not agree with what Hitler and the Nazi party stood for.

As we know, this was just the start for the Nazi Party who enlarged the scope of Dachau Concentration Camp. History tells us Dachau was used for the imprisonment of Jews, German, and eventually, detainees from countries that Germany had invaded.

The Gates to hell at Dachau carry the famous words “Arbeit Macht Frei” ( “Work makes free” ). These famous words also adorn the gates at Auschwitz Birkenau. During the lifespan Of the Dachau camp, they were 32,000 documented deaths and thousands more that are undocumented. Dachau was the longest-running of the concentration camps closing in 1945 after 12 years.

Tours to Dachau from Munich

Explore the haunting Dachau Concentration Camp on a half-day tour from Munich. Walk in the footsteps of prisoners first entering the camp and see the Shuntroom, Roll Call Square, Crematorium, and much more.

Additional Information: This tour leaves from Munich Central Station. You will meet your guide at a designated spot inside Munich HBF. The minimum age for this tour is 14

For more information and prices on this tour click here!

Visit Germany’s first Nazi concentration camp at Dachau to remember the victims of the Holocaust. Opened just 51 days after Hitler took power. Tour  Dachau’s gas chamber, barracks, and cells as your guide recounts the terrible story of the Final Solution the Nazi’s where seeking.

Additional Information: The tour starts in front of the Tourist Information for the City of Munich at the Gothic Town Hall in Marienplatz. We at Wyld Family Travel have personally done this tour and HIGHLY RECOMMEND it.

Book this Munich to Dachau trip today through us here!

Learn about Munich, and it’s association with Adolf Hitler and the Nazi party on a day tour from Munich. A super-efficient way for history buffs and visitors, in general, to learn about this dark period in German history. See Dachau’s gas chamber, barracks, and cells

Additional Information: The meeting place is at Marienplatz central Munich in front of the Tourist information centre. This tour is only open to people 14 years and older

Munchen Hauptbahnhof railway station is known as Munich Central Station. The train to Dachau to Munich will either start here or pass through here on its journey. Taking the train from Munich is the simplest way to reach the Dachau memorial is by public transportation. To get to Dachau take the S2 train from Munich in the direction of Dachau/Petershausen until you reach the Dachau station.

Once you have arrived at the Dachau train station, you will need to transfer to a local bus to reach the memorial site. Catch the bus 726 towards “Saubachsiedlung” to the entrance of the memorial site (“KZ-Gedenkstätte” Munich Dachau train ride takes around 25 minutes from Munich’s Central Station (Hauptbahnhof).

Knowing the efficiency of the Germans if they say 25 minutes it will be 25 minutes. The recommended ticket for the S-Bahn from Munich is a single (or partner) day ticket Munich XXL (München XXL). The most popular metro pass to buy for the route between Munich and the Dachau Concentration Camp Memorial is the Munich XXL Pass.

This pass covers all public transport options in Munich including trams, bus, subway, suburban trains, and regional trains inside central Munich for the entire day.  Since the XXL Pass covers all the inner zones of Munich, it is valid all the way out to Dachau. A group day ticket can also be purchased at a reduced price if you are a group or family travelling.

It covers the S-Bahn from Munich Central Station to Dachau and the bus in Dachau to the memorial site. ⇒ You can purchase your train tickets here ⇐

Once you have arrived at the Dachau train station, take bus 726 towards “Saubachsiedlung” to the entrance of the memorial site (“KZ-Gedenkstätte”).

How to get to Dachau from Munich by car

If you are driving your car or a hire car for your trip the distance from Munich to Dachau is around 20-25 kilometres depending on where in Munchen you start from. Makes sure you have your international drivers licence for hiring a car.  We have the following basic directions for you

After arriving at Dachau from Munich, you will find the public parking area located next to the memorial site at 73 Alte Römerstraße. The site is quite large and you will easily find parking space at Dachau
Parking at the site will incur, fees during the summer months (March-October). Current prices are €3,00 per car and €5,00 for busses. In the off-season between November and February parking is for free.

Places to stay at Dachau

If travelling by car, you may want accommodation in Dachau. Dachau has a range of accommodation options to suit everyone. We recommend the following places to stay in Dachau for you.

Visits to Dachau are free. The is no official entry fee. There is a small charge for an audio guide or English tour of Dachau that is run twice daily.

Further information for your visit

We suggest that if you are arriving at the camp independently arrive at opening time to beat the crowds from the tour buses that arrive. If possible avoid visiting in the summer months when travellers to Munich are at their peak.

The weather when visiting Dachau

Springtime in Munich / Dacha see’s the weather starting to warm up. The daily highs temperatures rise around 5˚C in each month from April to May. Hence, low temperatures increase from around 0˚C/32˚F in April to around 8˚C/46.4˚F in May. May is the wettest month of the year in this area of Bavaria.

Autumn from Septemeber to November in the Dachau and Munich are see’s the weather going from hot to sliding into winter. September is the mildest month with temperatures, which usually range between 9˚C/48.2˚F and 19˚C/66.2˚F. October is fairly cooler, and with that comes some cold winds with average temperatures ranging between 5˚C/41˚F and 14˚C/57.2˚F. November is the onset to winter, with average lows being around 0˚C/32˚F and highs up to 7˚C/44.6˚F.

Summer sees the warmest daily average in July with 18 degrees. The days are longer and the sunlight hours are at their peak during this time. Day weather temperatures in Munich will shoot up into the high 30’s at times and provide great weather for outdoor activities. Time to break out the sunscreen, summer hats and drink plenty of fluids.

Map of the Memorial Camp Dachau

Munich is the second biggest city in Germany.

Munich is serviced by many international airlines and budget carriers. For cheap flights from with Europe check Veuling, EasyJet and Eurowings. You can check the prices of international flights to Germany with CheapOair. Domestic flights can be booked with Expedia

By February of 2017 Flughafen München, Franz Josef Strauß features flights to 248 destinations, making it the airport with the fifth-most destinations worldwide.

The S1 and S8 S-Bahn lines connect the airport with the centre of Munich, with departures every 10 minutes. The airport is also easy and convenient to reach by bus from the Munich city centre

You can book a rental car and have it waiting for you at Munich Airport.

Munich has an extensive public transportation system. It consists of a network of underground (U-Bahn), suburban trains (S-Bahn), trams and buses. … Tickets can be purchased at the blue vending machines, found at U- and S-Bahn-stations, at many tram and bus stops and newspaper kiosks.

Before first embarking, the ticket must be validated – insert the ticket into the small stamping machines posted at the entrances to U- and S-Bahn tracks or on trams and buses. It’s a € 60 fine if you are caught riding without a valid ticket.

The Munich City Tour Card allows free use of public transport, plus discount and free admission to some of the best Munich sights. More information and booking click here

Another alternative for tourists is to buy a pass for the Munich Hop on hop off bus which takes you to all the sites in the city. Click here for further information and prices.

Munich has accommodation options for every budget from Hostels, to apartments and hotels rooms.

Hostels in Munich can start from as little as 20 euro’s a night for a shared dorm room. We recommend Meininger City Center or Jaegers Munich Hostel

Hotels in Munich generally start from around $100 a night for a double room and increase incrementally as the luxury rating rises towards 5 Google states that 3-star averaging $144, 5-star averaging $469 for a night stay.

We hope this article from us here at Wyld Family Travel has you inspired to visit Dachau and stay in Munich. There are so many things to do in Germany with kids, singles and couples. For more amazing ideas on where to holiday in Germany click through to our Germany Destination Guide page for more brilliant inspiration.

More travel inspiration for your trip to Germany 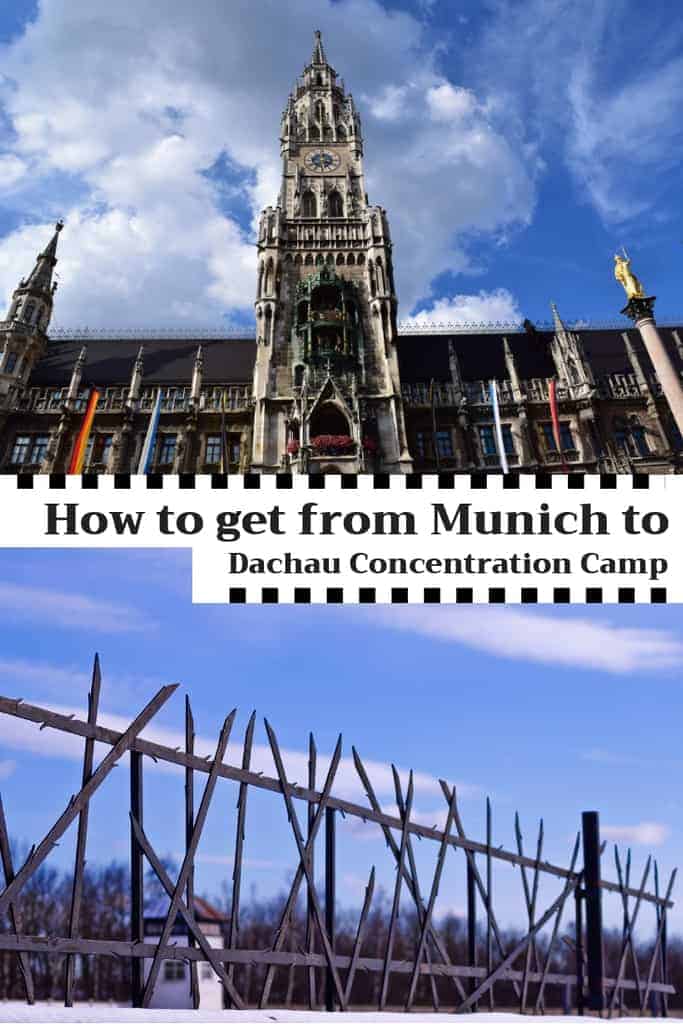 6 thoughts on “How to get to Dachau from Munich”