La Rambla Barcelona and the Gothic Quarter tourism and trivia

Most people will arrive in Barcelona Spain by plane via El Prat Airport. El Prat is the main airport in Catalonia. The airport services 37 million people arriving and departing every year. El Prat is  14 Kilometres from the city centre. Access to the city is available via airport transfer, taxi, bus and train. Aerobus BCN drops you off at Plaça Catalunya at the top of La Rambla. This is convenient if you have La Rambla Barcelona accommodation. Plaça Catalunya is where the ever popular City Sightseeing Bus runs from every day.

La Rambla is a street in central Barcelona. La Rambla is popular with tourists and locals alike. This is a pedestrian mall lined with trees which can help escape the relenting summer heat. La Rambla  stretches for 1.2 kilometers  in length. From Plaça de Catalunya in the center to the Christopher Columbus Monument at Port Vell.  When planning our trip to Europe last summer I spent lots of time looking at La Rambla Barcelona accommodation. 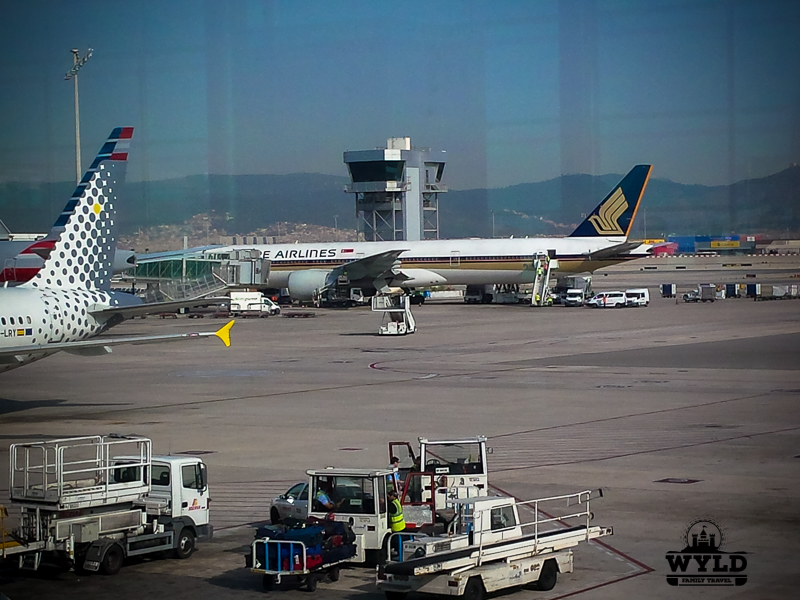 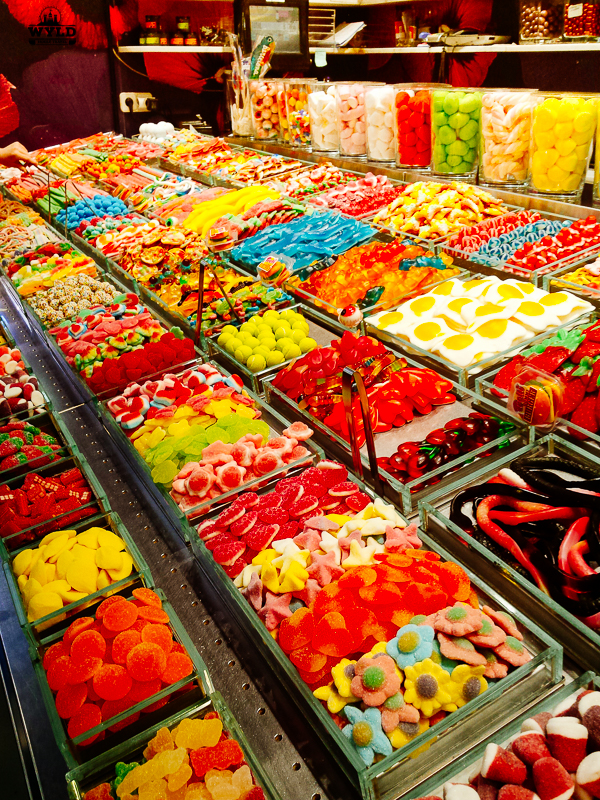 The Jamon Experience is a museum on La Rambla dedicated to ham. Spaniards love their ham. The museum describes itself as a new and unique space dedicated to Jamón in the heart of Barcelona. At the ham museum,  you will learn everything about Jamón in Spain! You get a variety of tastings of the Spanish style of ham.

The Museum of Erotica is something different. It is not a family travel museum that’s for sure. The Museum of 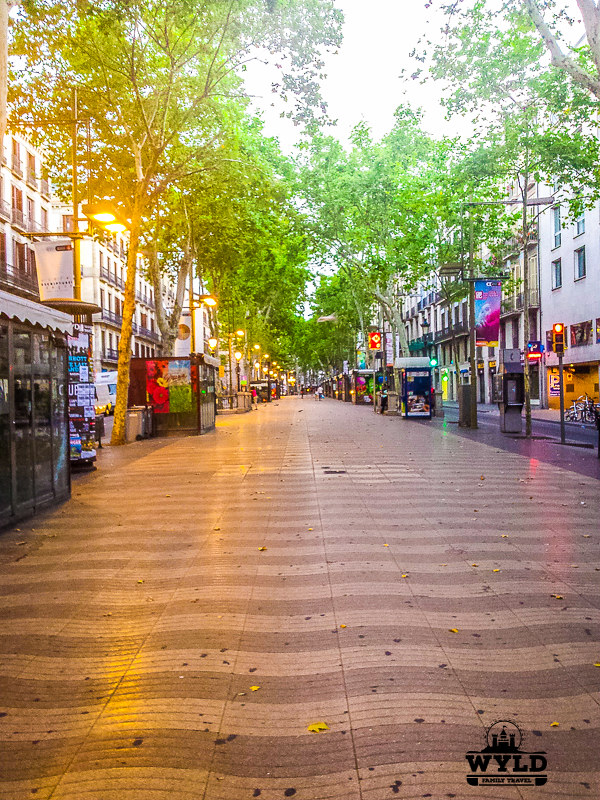 Museu de Cera much like Madame Tussauds is a wax museum. Muse De Cera creates scenes from history out of wax. Located in a neo-classical style building at the bottom of La Rambla, you will pass through scenes full of surprises. These scenes may feature Kings, Queens, musicians and artists just to name a few. You will be in awe at the skills of the creators of these wax sculptures. This pedestrian thoroughfare is alive 24 hours a day, especially in the summer. We were lucky and managed to find La Rambla Barcelona accommodation for a great price.  It was only 30 meters away from the strip. You will spend lots of time on La Rambla. Going places, catching public transport, buying things and just people watching. I have listed many facts about one of my favourite pedestrian streets in all of Europe. Say hello to my friend Chris Columbus when you reach the bottom of La Rambla. He will be standing on a pillar looking down at you!

The Barcelona discount card is great value for money, especially if you plan on visiting lots of sights that Barcelona has to offer. Valid for 48 hours your card helps you make the most out of your stay in the Catalan capital. The card includes public transport and discounted access to the city’s most popular museums, attractions, tours and activities.

The first stretch of La Rambla is between the Plaça de Catalunya and the corners of Carrer Santa Anna and Carrer Bonsuccés.  This part of La Rambla was named after the towers of the 14th-century city walls. Known as “Canaletes” because of the water channels that passed below the city. It was those channels that supplied this part of the city with water.  The walls are believed to have been fortifications to defend a palace or castle. 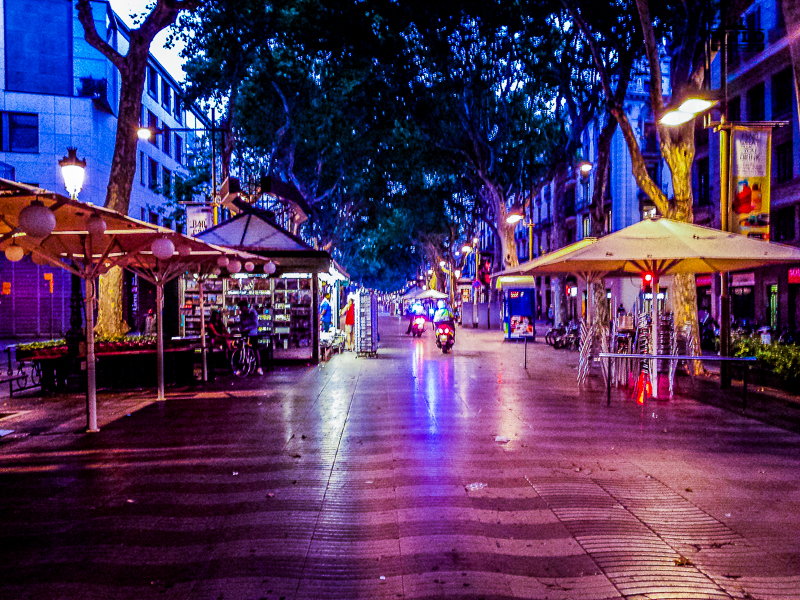 Another  section of La Rambla is bounded by Carrer del Carme and Portaferrissa. In the 16th century, it was the site of the

O’Toxo Tres Hermanos is located a few hundred meters off La Rambla. O’Toxo is a traditional Barcelona restaurant and it is where you will find, without a doubt, some of the best Tapas and Paella in the city. We can recommend this restaurant as we ate here twice during our 5 nights in Catalan capital. The seafood and chicken/seafood paella is a must. Do not buy the Paella on La Rambla you will only get the mass produced version that comes frozen in a box. O’Toxo offers the real deal cooked from scratch while you wait. Nothing better than some cod cake tapas, paella washed down by some Sangria!

The Gothic Quarter is positioned in the centre of the old city of Barcelona. The district stretches from La Rambla to Via 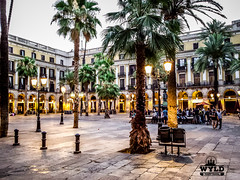 Laietana, and from the Mediterranean seafront to Ronda de Sant Pere. It is a part of Ciutat Vella district in Barcelona

If La Rambla is my favourite street well, Bari Gothic is my favourite neighbourhood in Barcelona. By staying near La Rambla it would put us either in or be bordering this neighbourhood. Bari Gothic dates back to the time when the Romans occupied the area where Barcelona now stands. The area is full of history and winding lanes for you to get lost in. It’s possible to explore by yourself or for a more in-depth look and information you could go on a tour of Bari Gothic.

I was hooked on this area from the minute I got lost in it. It is an amazing maze of lanes, alley’s that seem to open up into many little squares dotted throughout the neighbourhood.

Barcelona Cathedral dates back to the 13th century when construction first started. The cathedral is dedicated to Eulalia of Barcelona, co-patron saint of Barcelona. She was a young virgin who, according to Catholic tradition, suffered martyrdom during Roman times in the city.  A legend says the Romans stripped Eulalia naked in the public square.  A sort of miracle happened when snow started falling in mid-spring covered her nudity. This miracle completely enraged the Romans. The Romans put the poor girl put into a barrel with knives stuck into it and rolled it down a street.  According to tradition the street is now called Baixada de Santa Eulàlia. The body of Saint Eulalia is now entombed in the cathedral’s crypt. In the late 19th century work started on the facade of the cathedral. The design incorporated a neo-Gothic look. This construction was to cover the nondescript exterior that was common to Catalan churches. 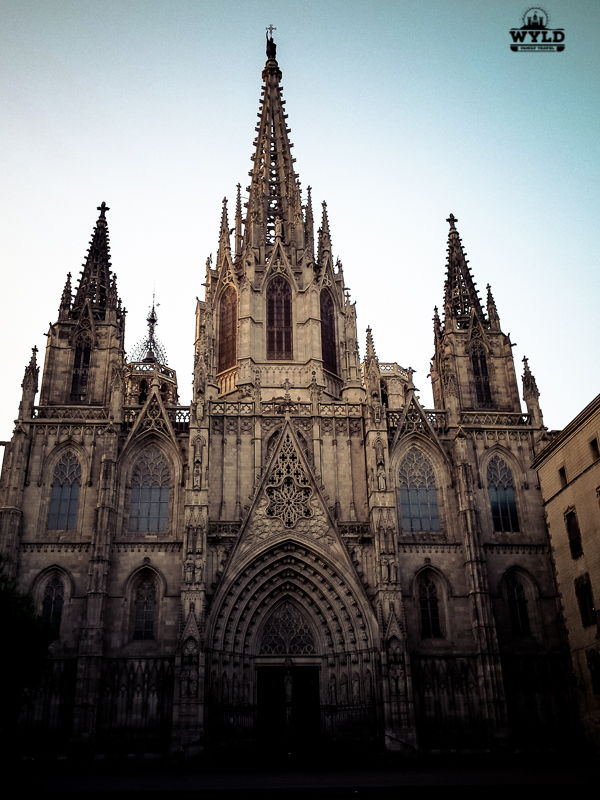 The Temple of Augustus in Barcelona was a Roman temple. Construction of the temple was during the Imperial period in the colony of Barcino (modern day Barcelona). The temple was a place of worship for Emperor Augustus but unfortunately, the temple fell into disrepair.  The temple was rediscovered in the 19th century. It was 37 metres long and 17 metres wide, and the front contained six columns (hexastyle temple). What a sight it would have been two thousand years ago standing on the highest point of Barcelona. Today the 4 remaining columns sit tucked away off  the end of Carrer Paradís in the Gothic Quarter. 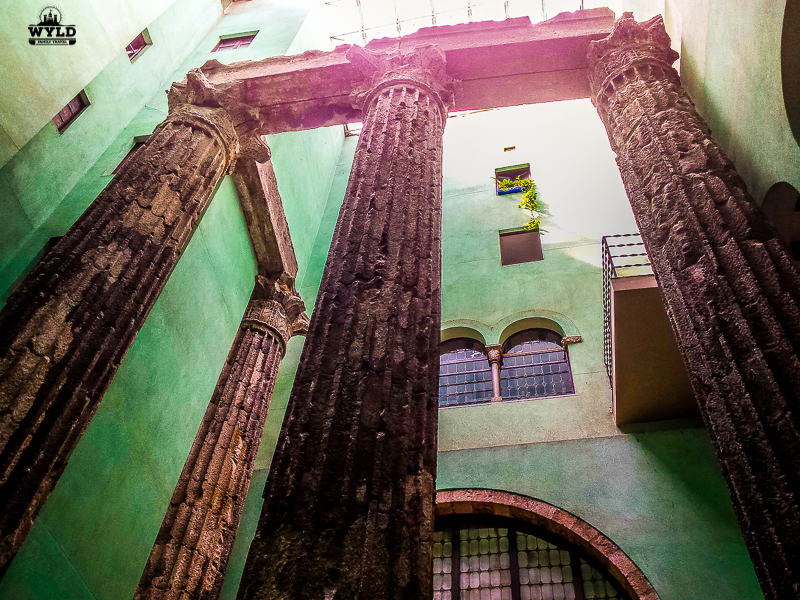 Barcelona town hall is smack bang in the middle of the Gothic Quarter of Barcelona on Plaça Sant Jaume. The best thing about this amazing building is that you go on a free tour through the town hall. You will see some amazing rooms that have been in use since the 14th century. When Barcelona was a Roman city 2000 years ago. Plaça Sant Jaume was the site of the Forum. The meeting place and stage for political conversation and ideas. Some might say that the square continues to play the same role today as Plaça Sant Jaume  is the site of Barcelona’s two political powerhouses.  Barcelona City Hall and the seat of the Catalan government, known as the Palau de la Generalitat de Catalunya. 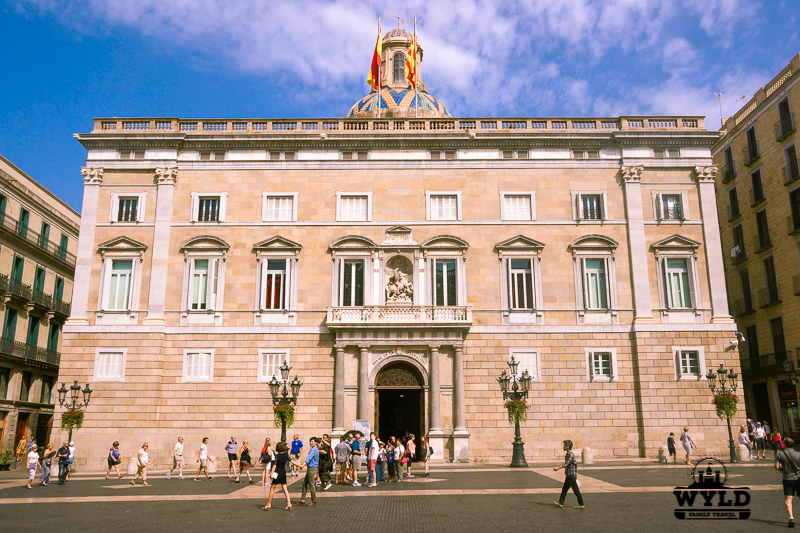 So we know La Rambla borders one side of The Gothic Quarter. On the other side, a few blocks away you will find Parc de la Ciutadella. For decades following its creation in the mid-19th century, this park was Barcelona’s only green space.   Once home to the Citadel of Barcelona, today the park house’s the Barcelona Zoo,  a museum, small lake and a  fountain designed by Josep Fontserè. At the bottom of the Gothic Quarter, you will find Barcelona Harbour.  The harbour features a shopping centre and The Barcelona Aquarium. You will be able to see the famous Montjuic cable car traverse the sky above the harbour.

Bari Gothic is accessible by foot and Barcelona Metro.  Metro stops Jaume 1 on the L4 line and Liceu on the L3 line via La Rambla.  Metro tickets are available at the station for single journeys or a pass for extended days.

Carrer de Ferran is the main shopping street in Bari Gothic. The street runs off La Rambla into the Gothic neighbourhood. Calle Ferran is an important street in Barcelona. It has many good quality bars, restaurants and shops. You will find big name big brand shops from around the world along with traditional shops on this street. The street links La Rambla to Plaça Sant Jaume and the town hall of Barcelona. Santa Caterina food market is a great place to buy all your fresh produce, meats, chesses and pretty much anything you like. the ever popular Devour Barcelona foods tour also start here. 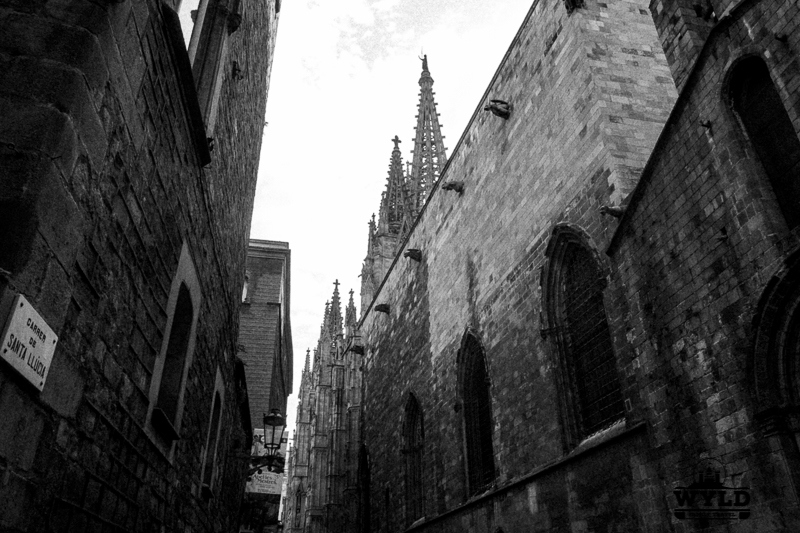 I am sure the many attractions in Barcelona will keep you busy. You can book tours through the city Discovery banner above. There is also many Day trips from Barcelona that can be done. Day trips to Montserrat and along the coast are very popular.

Just as a word of caution The Gothic Quarter is one of two  popular pickpocketing hotspots in Barcelona.  The other being La Rambla. It is a major problem in both areas of the city. Tourists should be wary when in these areas. If there is a crowd especially in summer on La Rambla or in The La Rambla Barcelona Market Just be aware and you will be fine.