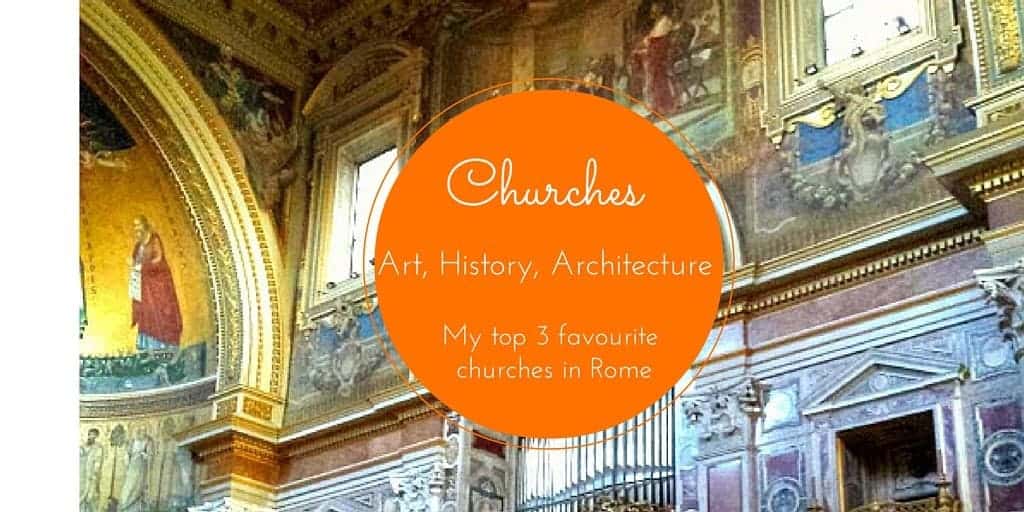 I need to start out by saying I am not religious, I don’t attend church, I don’t have an opinion on religion that I care to share. In this post, you will find no championing of Religion, god or Jesus. What you will find are my top 3 churches in Rome

What does interest me though is Religious History? The who, how where and why of Religion. Any Italy itinerary will be filled with church visits. Rome is an amazing place for exploring religious history. Rome is home to over 900 Catholic churches. A visit to the Vatican is a must but there is so much more to see.

Many of these churches are magnificent. They house art by some of the great masters, they display so-called religious artefacts from the time of Jesus and his disciples. This is why I visit churches. You can’t visit Rome for any length of time without seeing some amazing Churches.

The Papal Archbasilica of Saint John in the Lateran

The Basilica of Saint John Lateran was built under Pope Melchiade (311-314). The Basilica is the cathedral church of Rome  This basilica was the biggest church I entered when in Rome.It is enormous by any standards. Like a lot of Churches in Rome, the facade of this church is nothing special and certainly does not hint at the magnificence that is inside.

When you enter the main area it is amazing with gold colour dome roof but as you move slowly forward there is a whole other wing that branches off. I was lucky enough to explore this church early one morning when it was partially empty. St John The Lateran Church is claimed to be the most ancient church in the world. It is one of the 5 Papal Basilica of the world. It is the official seat of the Bishop of Rome.

It is the official seat of the Bishop of Rome. The bishop of Rome is the Pope. The Pope used to reside at this church until the popes went into exile in Avignon France in the 1300s. On return, the Pope’s took up residence at The Vatican. This cathedral of the Bishop of Rome means it ranks above all other churches in the Catholic Religion. This puts higher in importance than even St. Peter’s Basilica.

One of the highlights of this church is the huge sculptures of the 12 apostles that Pope Clement XI had built in the church. The sculptures are amazing are they are twice the size of humans. This Archbasilica is number 1 in our top 3 churches in Rome

It’s commonly thought that Sant Andrea was constructed between 1590 and 1650 to completion. In 1582, the Duchess of Alfami decided to leave Rome and bequests the land to the order to the newly formed Theatines order. The Theatines were not flush with money like other Christian orders so the church took some time to complete in full. Sant Andrea is characterized by its huge dome.

The dome on Sant Andrea is the second largest in Rome after St Peters. The dome illuminates the fresco that are painted on the dome.  The fresco contains depictions of Christ, Sant’Andrea, San Gaetano, Saint Peter, and the Assumption of the Virgin Mary. The tombs of the two Piccolomini Popes, Pius II (1405-64) and Pius III (1439-1503) are interned in the walls of the church. Pius III is famous for having the shortest papal reign at just 30 days.

After you enter the church the second chapel on the right was designed by Michelangelo for the Strozzi family. Sant Andrea is striking by its height and light from the moment you walk in. The light illuminates the amazing colours of this church.

For all us English language folk Sant Andrea is Saint Andrew whom the church is dedicated too. The long, high and bright design of Sant Andrea Della Valle was later a model for the construction of other churches such as St.Kajetan church in Munich and the Church of St. Anne, Kraków. Sant Andrea is number 3 in our top 3 churches in Rome. In this neighbourhood, there are some great places to eat. Actually there are great places to eat in Rome everywhere

San Pietro is sometimes known as the Basilica Eudoxiana. San Pietro dates back to 432. San Pietro was built to house the chains that St Peter was bound in while he was held in Jerusalem. Legend has it that the chains were given to  Pope Leo I by Empress Eudoxia (wife of Emperor Valentinian III). The legend states when the pope held them next to the chains from of Peter’s first imprisonment in the Mamertine Prison in Rome, the two chains miraculously fused together.

The chains are on display to the public and are kept in the reliquary under the main altar in the basilica.I have seen a few of these so-called artefacts throughout Europe including The Holy Lance in Vienna and part of the true cross. None of these Relics can actually be confirmed, but they make good viewing and conversation.

San Pietro’s other great feature is the giant sculpture of Moses. This sculpture was created by Michaelangelo in 1515. A huge fresco dominates the roof of the church. The fresco portrays the fusing of the chains. San Pietro is my 3rd favourite church in our top 3 churches in Rome

I can’t seriously write a piece about great churches in Rome with mentioning the Sistine Chapel. We have been and viewed the Sistine Chapel and the artwork is magnificent that adorns this famous site. What lets it down in my eyes is the fact that it’s very hard to appreciate its beauty and splendour.

You are crammed in like cattle and moved through like a herd of sheep while security guards yell at the top of the voices of people to stop taking pictures. This is why The Sistine Chapel does not appear in our top 3 churches in Rome. The churches I have mentioned above can be viewed and appreciated in a time frame that suits you and at times in near isolation from the crowds of Rome.

These are our top 3 churches in Rome, Churches are excellent free things to see in Rome. A visit to churches should be part of any 3 day trip to Rome . What are your memorable churches?

8 thoughts on “Our Top 3 churches in Rome, Art History, Design”