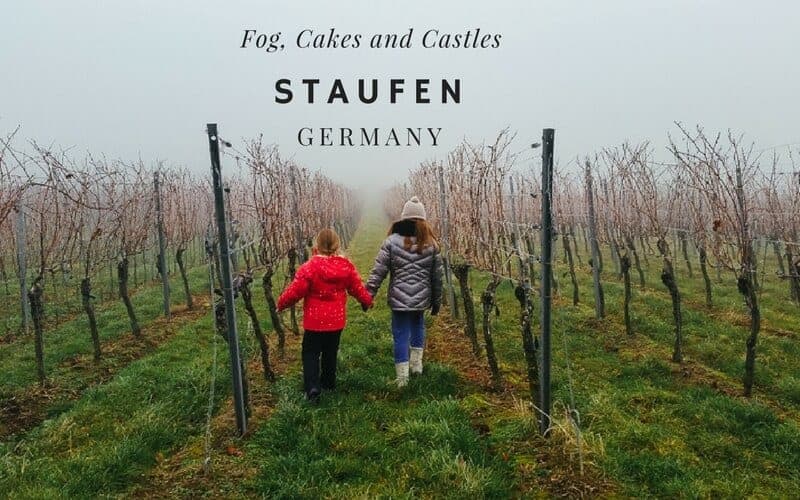 Winter in Freiburg im Breisgau can be a dower affair, lots of fog and very little sun. So what does one do with 2 kids in tow when the weather is like this? Well, you take off with some friends, climb a hill to explore a ruined castle have some cake and coffee and visit a distillery! We headed to Staufen im Breisgau which is a short 19km journey from Freiburg and close to the French border region of Alsace.

The Staufen Castle (or Burg Staufen) sits 300 meters above the township of Staufen Germany. Mind you when we visited we could not see the town even though it was only a few hundred meters below.

The Burg Staufen was most likely built in the 11th century and some say even earlier there was a Roman tower in this position. Staufen castle was built to protect the rich silver mines in the Muenster Valley. These mines were the main source of income for the Lords of Staufen. The Staufen Burg was occupied by the Staufen family up till the start of the 16th Century when the last in the Staufen line died.

During the 30 Year Wars – Swedish troops occupied Staufen, burning Staufen castle down to the ground in 1632. I must say these Swedish troops were a bunch of destructive buggers. Chateau Haut Koenigsbourg that we have also visited lies 66 km away across the border in France was also looted and destroyed by these Swedes.

Staufen Legend: Johann Faust was a famous alchemist and magiciant who was born in Knittlingen in the 15th century. Fraust was made famous in books of the time. In his quest to produce gold, he was said to have made a deal with the Devil himself right here at an inn in Staufen im Breisgau. Faust blew himself up in 1540 in a room at the Lions Inn. This made the superstitious, church-goin’ folk believe the tale.

Back to Staufen Burg, you can park your car and walk up the road to the ruined castle through fields filled with grapevines. The vines still had grapes on them that were waiting to be made into icewine or Eiswein in German. The best ice wine is a type of dessert wine produced from grapes that have been frozen while still on the vine. Icewine is only produced if the conditions are right and German law states it must be -7 degrees to produce eiswein.

If conditions have been right, buy some ice wine in Staufen or try some in a brilliant Staufen restaurant. It was the first time we had ever seen grapes left on the vine-like that and we had not heard of eiswein before. It was great for us to learn about ice wine as we thought that they had just not been harvested.

Luckily the girls had not tried to touch them as eiswein is a very expensive drop and some of the best German ice wine is produced in this area. I desperately wanted to bring home some eiswein but I did not think it would make the journey home safely.

The Staufen Burg these days is a ruined castle. Today what is left consist of high walls around an inner yard but you can still make out the castle layout easily. There is a tower at the north-western corner that can still be climbed to give superb views across the Rhine Valley towards France and the Vosges mountains some 30km (50 miles) to the west.

For us, we could only just see the other side of the castle because of the fog. This was actually pretty cool and made the castle ruins all that more mysterious. The kids had fun playing hide and seek and climbing the ruined castle walls.

We had worked up a hunger climbing to the Staufen Burg in the 5 degrees temperature. It was now time to head into town to find a cafe in Staufen for some cake and coffee. Staufen Germany these days is a small town with a population a little over 7000.

Staufen is one of this fairy tale picture-perfect towns with winding streets and cobblestones. Shops selling local wines, beers and crafts in all directions and archways leading into secluded little courts. Staufen Germany is stunning.

One thing we did notice was some sizeable cracks in some of the buildings. We learnt that since 2008, the centre of the city has reported having risen some 12 cm, after initially sinking a few millimetres. This type of ground displacement has caused considerable damage to some of the historic buildings in the city centre, most notably the town hall has a huge crack running up its facade. The cause has been blamed on fracking after a drilling operation in 2007 to provide geothermal heating to the town hall

We made our way to Cafe Decker Staufen. Cafe Decker is a rather upmarket cake shop/cafe in Staufen. Café Decker opened in 1961 by Hermann Decker after years of apprenticeships and travelling in Germany and Switzerland. Decker products are made with the principle of using only the finest ingredients to make the finest bakery and confectionery products.

Decker has one of the best arrays of cakes, pastries and sweets we had seen anywhere. There was literally 4 mouth-watering Aussies dribbling on their display cabinets. Kids hands and eyes were darting in all directions. “I want that one”, “Can we try this one”, “Can we have more than one Dad” were being said to me at a cracking pace!

The Cafe Decker website states that you have the choice of over twenty different daily creampies, cakes, desserts and an in-house range of over 50 types of chocolates at their cafe in Staufen im Breisgau. Expect to pay around 3-4 euros per slice but we thought it was absolutely worth every cent!.

We warmed up with coffee and cake and it was amazing. In summer they serve a variety of homemade ice creams to keep the whole family happy. (Looks like a visit to Staufen Germany is on the cards in the summer!).

In the summer of 2019, we did get back to Staufen. We called by and visited the Schladerer distillery. Schladerer Schnapps and fruit brandy is know all over the world and is extremely popular in Germany. Schladerer is still family-owned and continues to put quality over quantity when it comes to there product. Schnapps and Schladerer fruit brandy is their core business but like all companies, they are evolving to produce Gin, Scotch and a number of new products.

The tour costs 15 Euro per person and you have the distilling process explained to you, shown a short video, tour the storage facility where the Schladerer products are stored in wooden and copper barrels. Finally, you get to sample some Schladerer product. The tour entitles you to 10% off any product in the gift shop

We had spent an amazing few hours exploring Staufen Germany and its ruined castle, sampling its cakes, learning its history both old and new and waiting for the medieval horseman to ride in out of the fog that had engulfed this amazing area in every direction. We look forward to visiting Staufen Germany again in the summer in the future for maybe some Eiswine and flammkuchen.

How to get to Staufen im Breisgau Germany

Where to stay in Staufen Germany:

Let us help you plan your trip to Germany

The following articles on our site will help planning your epic trip to Germany.

How to get from Munich to Neuschwanstein

Things to do in and around Freiburg

The Berlin Pass for families

How to get from Berlin to Warsaw

Things to do in Munich

We recommend you join Transferwise multi-currency card for all your travelling money needs. Transferwise is up to 8 times cheaper than banks when it comes to transferring money from one currency to another. Transferwise supports up to 59 different currencies worldwide. You can track your spending on the Transferwise app and withdrawal funds around the world with your Transferwise ATM card. Sign up for Transferwise today

If independent travel is not your thing, a tour might be just what you’re looking for. Transport, accommodation and more are supplied for your holiday in Indonesia. We only recommend the best tours by Get Your Guide, Tourradar and Viator.

We hope this helps and inspires a visit to Germany for you. You can search for more articles on our Germany page. Email us at mark.wyld@wyldfamilytravel if you have any questions or would like help booking a trip to Germany.

Wyld Family Travel is a participant in the Amazon Services LLC Associates Program, an affiliate advertising program designed to provide a means for sites to earn advertising fees by advertising and linking to Amazon.com.