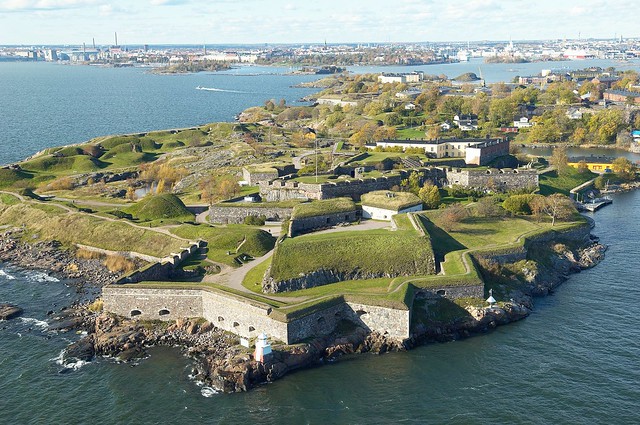 The ferry ride through the calm waters of Helsinki is picturesque. As your leave the harbour you see senate square and the onion-domed church glistening in the nordic sun. If you are lucky enough to get a sunny day you will witness the bluest sky I have seen anywhere in the world 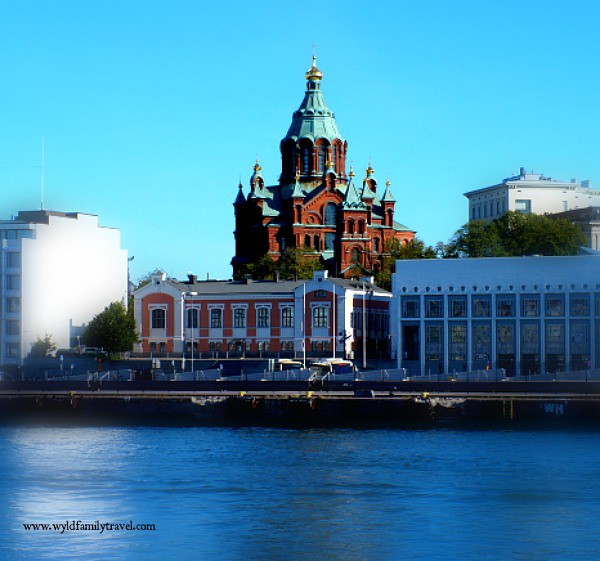 History of The Suomenlinna Fortress:

In 1747, the Swedish government still reeling from many military defeats took the decision to build a defensive fortress. The fortress located in the Susiluodot islands off Helsinki. As well as a fortress the island would be responsible for the construction of the Naval fleet. The Swedish crown commenced the construction of the fortress in 1748. At this stage, Finland was still under Swedish Rule. The Suomenlinna Fortress built as protection against Russian expansionism. Called Sveaborg during construction the island’s name changed to Suomenlinna

The island  boasted the fortress  and its sea facing fortifications on the mainland. These fortifications would ensure that an enemy would not be able to land on the beach at Helsinki and invade from there. The island was never quite completed as planned due to many wars the Swedish were active in. Much of contraction work fell on the shoulders of 6000 garrisoned soldiers who in the area.

During the Finnish War, the fortress surrendered to Russia on May 3, 1808.  Mystery  surrounds why the island surrendered when there had been only a few minor skirmishes. This was the onset of the occupation Finland by Russian forces in 1809.

The Suomenlinna Fortress is unique in the fact that it served as a defence for three different realms, The Swedish, the Russian and the Finnish. 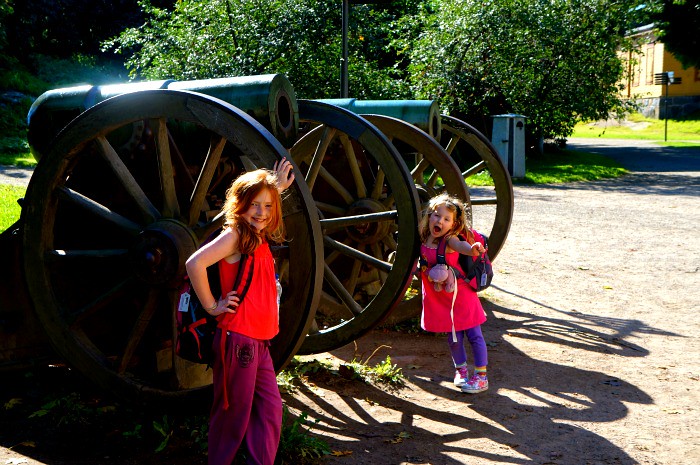 Features of the Suomenlinna Fortress :

The 15-minute ferry ride to theSuomenlinna Fortress  was an experience in itself. Our kids were overjoyed with the thought of catching a boat The girls were first in line to get on the boat. Willow and Marley did the dash up the stairs to the top deck at Usain Bolt speed. The ferry cruised through the picturesque blue water of Helsinki Harbour.

It provided an amazing view of Helsinki as the ferry moved away from the mainland. We passed rocky outcrops  with old men fishing on them. We passed small islands with a handful of holidays houses on them. We passed mega ferries that ply their routes in the baltic sea before arriving at the Suomenlinna Dock. 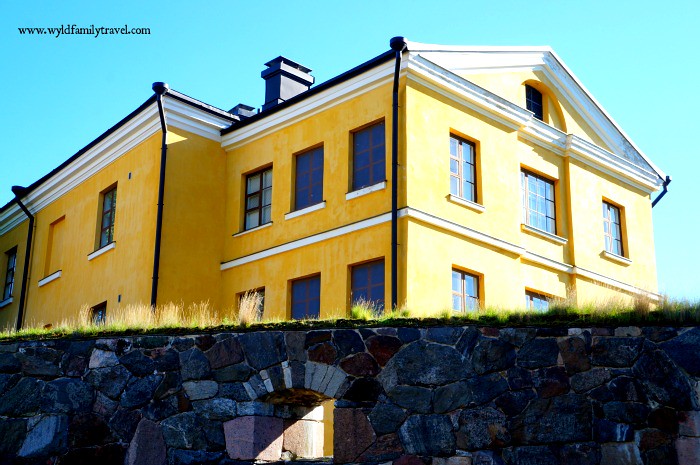 When you arrive at the island you will be greeted by the jetty barracks. The jetty barracks were built to house 250 troops. Today they house a brewery, art gallery and cafe.  The Kings Gate is the symbol of The Fortress ofSuomenlinna. The gate was built in 1753 and was used as the entrance to the fortress when arriving by Boat. These days the Kings gate is largely symbolic of the history of the Island.

The Kings gate is a great place to watch the huge Ferries that ply their trade between Helsinki and Stockholm pass by. The great courtyard served as the centre of the administration area. It was also used as the town square. In the middle of the courtyard is an impressive monument/grave to the man who designed the fortress Augustin Ehrensvärd. A museum dedicated to Augustin Ehrensvärd is located in the courtyard in the former Commandant’s House. 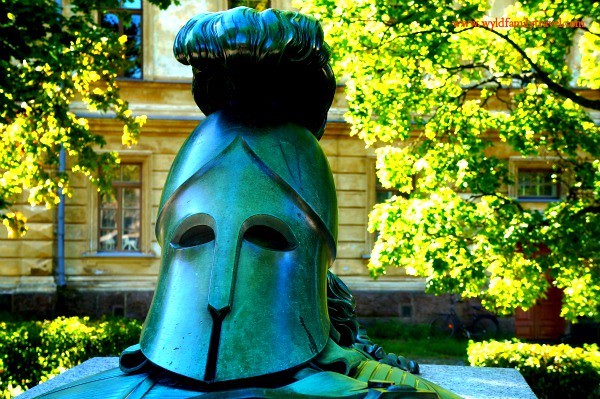 The island is also a home to people today. As we explored we came across a kids park. Slide and swings time was in order for Kids. It was not a big park or modern by any means. The park was big enough for kids to have some fun. It was enough to break up the walking  involved with exploring Suomenlinna. The Suomenlinna Church takes its inspiration from the Russian churches of the nordic region. You know the ones featuring the onion shaped domes. The Suomenlinna church built during the Russian occupation of the Finland in the early to mid-eighteenth century.

There are 6 different museums on the island. The museums include The Suomenlinna Museum, The Toy Museum, Submarine Vesikko,  Custom’s Museum,  Military Museum Manege and the before mentioned Ehrensvärd Museum.  We visited the Suomenlinna Museum. It has a small but interesting exhibition on the history of the island. The museum showcases artifacts that have found on the island. Marley liked the scale model that was on display. A short movie about the Fortress of Suomenlinna is also available to give you some history of the place. 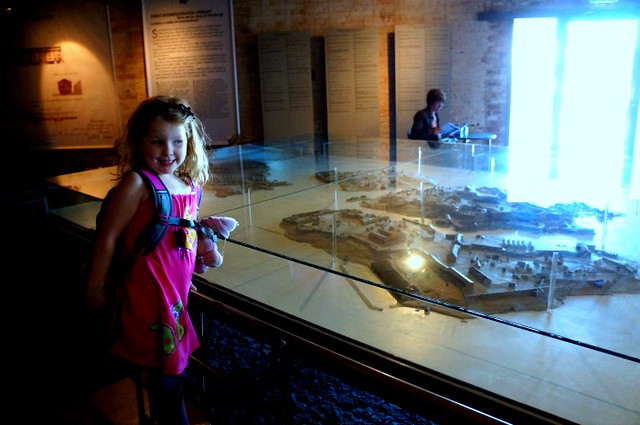 Overall The Fortress of Suomenlinna is a good place to spend half a day while in Helsinki. There is plenty of space for a walk and for the kids to have a run. Once you reach the far side of the island there is plenty of exploring for the kids. There is old cannons, fortifications, sea walls and grassy mounds to climb and play on. For active families, you can ride bikes on the island. The island is signposted well for directions. The paths are in good condition for walking. You can eat at one a the cafe’s or restaurants on the island. Alternatively, take a picnic sit on the grass and enjoy the views of the waterways.

Information and facilities The Suomenlinna Fortress:

Tours: Guided Tours of The Fortress of Suomenlinna are available daily in the Summer Months in a multitude of Languages. For details click here

Pros for Families: Easy to reach from Helsinki. Kids will love the boat ride. Playground facilities. Exploring tunnels. Can dip your feet in the water in summer. 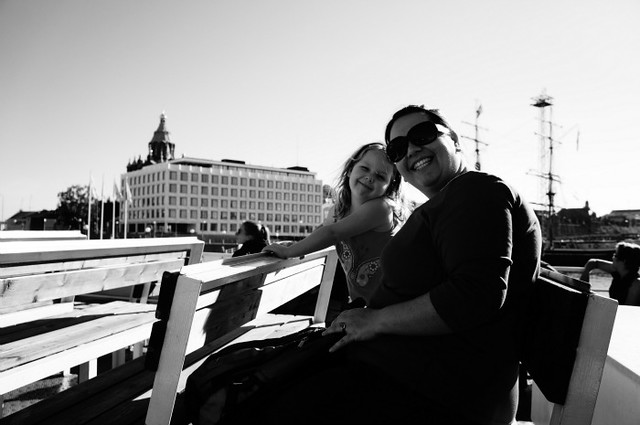 Cons for Families: Some of the paths are not stroller friendly ( a map of stroller-friendly paths is available here). It can be cold on the ferry depending what time of year it is. Bring warm clothes. A fair amount of walking is required.

How to get There: Suomenlinna Fortress  is only accessible by Boat. Ferries leave Market Square to reach The Fortress of  Suomenlinna. Please see the City of Helsinki website for more information here

The Suomenlinna Fortress  made a great family travel day out.