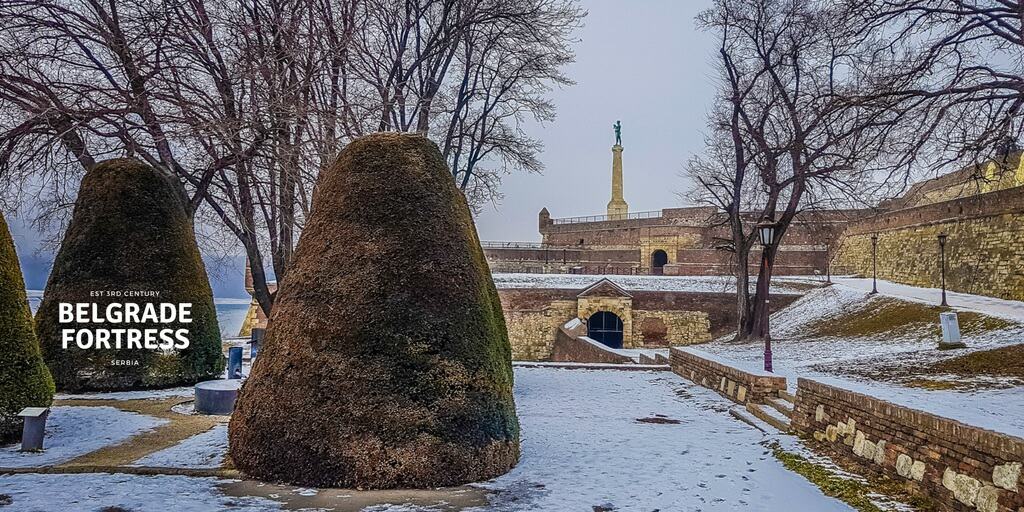 When we first started researching things to do in Belgrade the Kelemegdan Fortress immediately caught our eye. We love visiting historical attractions so the Belgrade Fortress was inserted high on our destination list of places to see as far as Belgrade sightseeing went.

Historical attractions like castles, fortress and palaces can teach you so much about the history of the place you are visiting. Belgrade Fortress was no exception to this. The Kelemegdan Fortress is an extremely popular Serbia tourist attraction. Lonely Planet Serbia has Kelemegdan ranked as the number 1 attraction in Serbia. TripAdvisor Belgrade gives the fortress 4.5 stars.

Things to do in Belgrade at the Kelemegdan Fortress

While there are so many things to do in Belgrade a visit to the Fortress is an experience in itself. There are plenty of things to do in The Kelemegdan Fortress grounds that will have you occupied for a long time

We visited the Fortress twice in winter. Winter in Belgrade found the snow-covered ground and low temperatures meant we had the place to ourselves. We were able to witness ice sheets flowing down the Danube, after all, it was only -8 the day we were there! The girls loved the open space and enjoyed throwing snowballs. We spent a long time just standing on the walls looking at the surrounding views from the Fortress. The Victor Monument is an amazing sight at the Kelemegdan Fortress.

There are 4 sections to the Kelemegdan Fortress

Belgrade Fortress is located centrally to the city. The Fortress is within the Kalemegedam Park and the area is the focal point for all tourists looking for things to do in Belgrade. The Fortress is broken up into four sections these days.

Donji Grad is the area that lies in front of The Victor. It’s a low-lying area that is prone to flooding. The area does feature The Orthodox churches of Ružica (former Austrian gun depot) and Sveta Petka.

Gornji Grad is the area behind The Victor and the way we entered the Beograd Fortress. It’s a wide-open space transformed into a park area for the residents of Belgrade. There are basketball and tennis courts in the area for recreational activities.

The Belgrade Planetarium makes for an interesting place to visit with the kids.

The controversial Roman well closed to visitors unless you do a tour is located here. The Roman well is somewhat of a mystery with some saying it dates back to Roman times. Others saying it only dates back 200 years to the Austrian-Hungarian empire. The well’s total depth is 60.15 meters with a diameter of 3.40 meters.

Mali Kalemegdanski Park is the section in the northeast of the Beograd Fortress. It is in near the urban area of the City of Belgrade. It is also home to the Belgrade Zoo.

Veliki Kalemegdanski Park is in the southern corner of the fortress. Many people will enter The Fortress this way if coming from the Belgrade Old Town city area. The wide promenade leading to the Fortress through the park is lined with market stalls selling souvenirs and trinkets. This area of the park contains statues and sculptures. The most important is the monument of gratitude to France. This honours the French soldiers who died defending Belgrade.

The Museum of Forestry and Hunting

The Forestry and Hunting museum had many exhibits of animals on display.

The Dinosaur Park at Kelemegdan Park

A new feature to Kalemegedam Park area is a Dinosaur Park. There are 35 replicas of dinosaurs built to a life-size scale. These relics give off sounds and are an educational experience for children visiting Belgrade.

This 125-meter high location of this Belgrade attractions would have been enough to stop many invaders in their tracks. The Fortress location was occupied throughout history by the Celtic tribes, the Romans, Goths and Huns. A legend even speaks of Atilla the Hun buried somewhere at the confluence of the Sava and the Danube Rivers.  That means one of the histories most fearless warriors is buried under Belgrade Fortress. Today the Kelemegdan Fortress is a declared a Monument of Cultural Exceptional Importance by the Republic of Serbia.

This Victory statue is to commemorate Serbia’s victory over the Ottoman and Austro-Hungarian Empire. The Victor debuted in 1928. This Victory Statue is an amazing sight standing at 14 metres (46 ft) high and looks out over the River towards new Belgrade. The direction that was once the Austro-Hungarian Empire in the far distance. The Victor stares down invaders daring them to come forward and try and take the Belgrade Fortress. As you approach this monument from behind it looks much like an Oscar (the film award). The popular Belgrade free walking tour brings you to the Victory Statue and goes more in-depth on the history of the most popular monument in Beograd City.

Numerous Fortress gates still survive, the most important ones are Zindan Kapija, Inner Stambol Kapija and the Charles IV gate. These gates are important for their design with The Charles IV gate being the only Baroque design in Belgrade. There are walls from Roman and Medieval times, Turkish and Austrian eras.

Kalemegdan Park is a must-see in Belgrade

Kelemegdan Park which surrounds the fortress covers an area of 53 ha (130 acres). The name Kelemegdan is derived from the two Turkish words: ‘Kale‘ (meaning fortress) and archaic word of Turkish origin ‘megdan’ (meaning battlefield). In a 2013 report, it was stated the park had 3,424 individual trees from 80 different tree species. Most of the trees were between 20 and 60 years old.

The park is very popular with both locals and tourist alike especially in warm summer months of the year. It is one of the top things to visit in Belgrade. The grounds have been used for concerts and most recently the Kalemegdan summer festival. Our kids loved the fact that we were able to see many squirrels scurrying around the park from tree to tree. There are amusement rides for kids that run in the summer months along with food and drink stands. Kelemegdan truly is the place to be in Belgrade.

The Kelemegdam Park and The Belgrade Fortress is accessed from Belgrade Republic Square in the city centre via Knez Mihailova Street pedestrian mall.  Shopping on Knez Mihailova is definitely one the things to do in Belgarde if you love shopping. This is the main Belgrade shopping centre district in the city. Catch Number 2 tram part of the Belgrade Metro system in the direction of Pristanište, this will get you to Kalemegdan and the Belgrade Old Town.

Direction Vukov Spomenik will get you to Slavija Square and Bulevar Kralja Aleksandra. We used a taxi most of the time in Belgrade. The Belgrade Taxi we found to be inexpensive. We asked the staff at our hotel Holiday Inn Express Belgrade to call a taxi when leaving for the day.  We accessed Beograd Kelemegdan the first time by taxi and our second visit was while using Belgrade Free Walking Tour. Free walking tours Belgrade leaves from Republic Square every day and we recommend it to learn more about activities there are to do in Belgrade. Belgrade what to see? We say start at Kelemegdan Park!

How to get to Belgrade

Where to stay in Belgrade:

We hope this article from us here at Wyld Family Travel has you inspired to visit Belgrade and The Kelemegdan Fortress. There are so many things to do in The Kelemegdan Fortress that will have you entertained for your families the whole stay in Belgrade. For more amazing ideas on where to holiday in Serbia click through to our Serbia Destination Guide Page for more brilliant inspiration.

More travel inspiration for your trip to Serbia 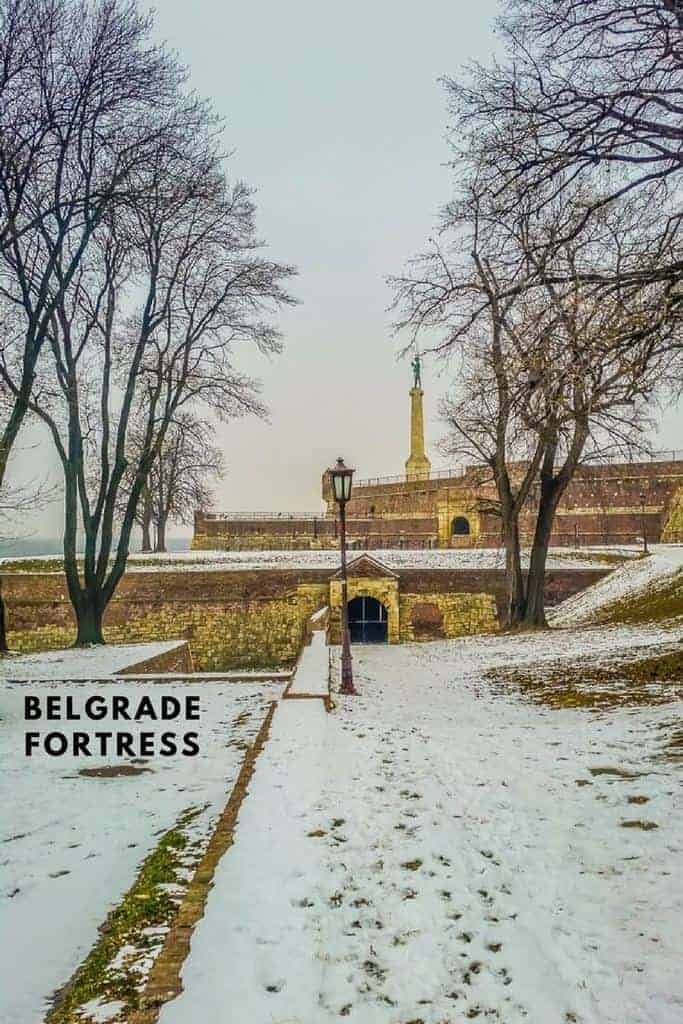 6 thoughts on “Things to do in Belgrade The Kelemegdan Fortress”