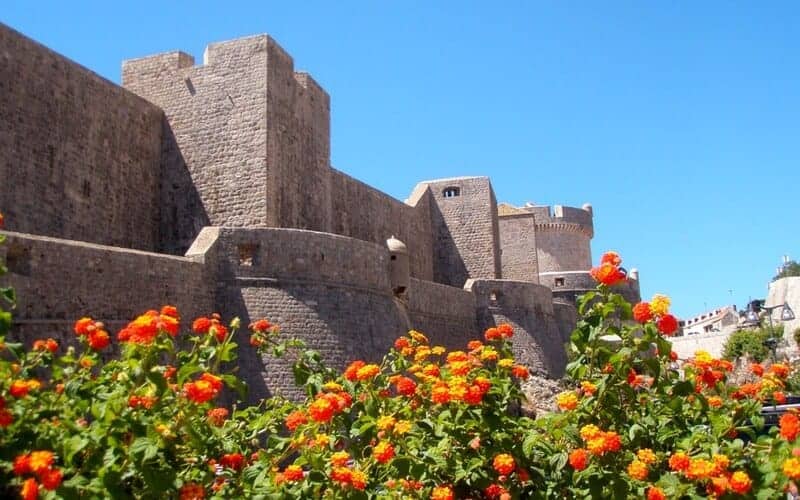 We make no secret of the fact we love old medieval cities. Most of the time they have amazing old towns and intimidating city walls. Dubrovnik Croatia fitted the mould. The Walls of Dubrovnik have a reputation of having retained their medieval walls.

The walls of Dubrovnik today remain in their original shape and design. Nowhere else in the world they say can you see a finer example of medieval fortifications. The walls of Dubrovnik were never breached in any attacks by hostile foreign invaders. UNESCO thinks so as Dubrovnik was included in the World Heritage List from UNESCO as far back as 1979.

Defensive walls and castles have surrounded the city since sometime around the 8th century. In the 9th Century, the city was well enough fortified to survive a 15-month long invasion by the Saracens.

Originally Dubrovnik was a small island. Sometime in the 11th century, the land between it and the mainland was filled in.  This enlarged the city and requiring further defensive walls built.

If you like this article why not take it with you in your pocket. Wyld Family Travel has teamed up with GPSmyCity to convert some of our most popular articles into apps for your phone. Click here to find out more

These walls were the basis for what you see in Dubrovnik today. The present shape of the walls dates to the 14th-century design with construction taking place in the 15th and 16th centuries.

This construction was put in place as Dubrovnik gained its independence from the Venetian empire. Dubrovnik was no longer able to rely on Venice for protection.

The Dubrovnik City Walls are some of the largest defensive walls in Europe. How can one not be impressed with the city walls of Dubrovnik? Dubrovnik City walls are the most important feature of Dubrovnik and they are a world-renowned iconic symbol. The striking white stone construction of the walls is why today you will often hear the city referred to as the Pearl of the Adriatic.

Enjoy the Walls of Dubrovnik

Dubrovnik City walls run uninterrupted for 1940 meters (6365 feet) encircling the entire City. The City of Dubrovnik is completely surrounded. This provided the greatest protection by its defensive walls and forts, including the Old Port. There are few cities in the world where you start and finish in the same spot when walking the city walls.

Let me start by saying that we had what I believe is a unique experience on the Dubrovnik wall walk. We were in Dubrovnik in January at the bottom of the tourist season for the Adriatic coast. I mean Dubrovnik was literally closed for business. Restaurants were closed, museums were closed, Stradun in the old town was being turned into a film set for a Leonardo DiCaprio movie.

Dubrovnik has 1940 meters of walkable medieval town walls. Amazing sights on every sectionClick To Tweet

We walked the entire length of the Old Town walls and passed only 6 people. Yes, 6 people in the entire 1940 meters. We had the walls to our selves. No jostling with other tourists, no waiting for a great picture we had it to ourselves. Now I am told that this is unfathomable for people who have been in the summer.

We started our tour of the walls of Dubrovnik from the St Johns Fortress Entry point. St John Fortress guards the entry to Dubrovnik harbour. Armed with our Dubrovnik old town map we walked taking the views of the blue water of the Adriatic.

We watched dark clouds roll in from out at sea we admired the red roofs of the Old Town building. I climbed the Minceta Tower without waiting. The Minceta Tower is the highest point of the city walls. The Minceta Tower was built in 1464. I was able to look in a 360 view without another soul present. The Dubrovnik old town map was great for finding the sites from above

We were able to stand where Tyrion Lannister and Lord Varys planned the defence of King’s Landing for Game of Thrones fans.  Along with your journey, you will find that the city walls are protected with 2 round towers, 12 quadrilateral forts, 5 bastions and 2 corner towers. Some of these include the mentioned Minceta Tower, The Bokar Fortress, Fortress Revelin and Fortress of St John.

Just to give you a view of what the walls are like i asked our friend Holly from four around the world to add her summer experience of the Dubrovnik city walls – We visited Dubrovnik in the middle of last summer with our two daughters, aged 1 and 3 at the time. The city is very busy in summer, with sweltering heat and little shade. This is the same for the city walls. It can be slow going at times with many tourists still braving the heat to enjoy the views.

Thankfully there are a couple of refreshment areas along the way. Nothing compared to a freshly squeezed juice or an ice cream after walking in the sun for an hour! Be mindful of the closing times for entry onto the walls, as we planned to go later in the day when it was cooler but for safety reasons they close access earlier due to the time it takes to walk the walls. Most of all, be sun safe, keep children close and stay hydrated

Family Travel Tip: Be careful of the kids running off and going down the stairs by themselves. As with many medieval constructions the stairways can be very steep and high.

The Dubrovnik wall walk delivered the experience we were looking for and more. The Old town is beautiful from above the Adriatic Sea seems to stretch on forever. We also viewed the walls from above at the Dubrovnik cable car station.

This vantage point from Mount Srd will give you an all-encompassing view of the old town and the defensive walls. It’s well worth a trip on the Dubrovnik cable car.  For the latest prices on the Dubrovnik Cable Car click HERE

Entry to the City Walls

There are three entrances to the Dubrovnik wall walk. Entry on Stradun by the Pile gate, by Fort St. Johns and by Fort St. Luke, Od sv. Dominika street. You can tour the walls of Dubrovnik and the Fortress Lovrigenac for free when you purchase the Dubrovnik City Card. Dubrovnik city walls prices are as follows.:

If you want a more in-depth tour where you will learn many facts about the Dubrovnik Walls we recommend you buy tickets for the Dubrovnik’s City Walls and Wars Historic Walking Tour.

The City Walls are definatley one of the best things to do in Dubrovnik. I would actually say there are best Dubrovnik attraction.

Admission prices to the Blue Lagoon

Where to stay in Dubrovnik:

Dubrovnik has accommodation options for every budget from Hostels, to apartments and hotels rooms.

Hostels in Dubrovnik can start from as little as 16 Euro a night for a shared dorm room.

You can search for Airbnb for there Prague offerings. If you have never used Airbnb before get yourself $50 credit by signing and booking a stay right HERE

Hotels in Dubrovnik Croatia generally start from around $88.00 a night for a double room 3star and increase incrementally as the luxury rating rises towards the 5-star average price of $133.00.

You can compare and book your stay on Hotels Combined

( All coloured text in the Getting to Dubrovnik, Getting around Dubrovnik and Where to stay in Dubrovnik links to the pages mentioned for your information and booking convenience. We at Wyld Family Travel will make a small commission from any bookings you make. This money goes into maintaining our website. )

We had an amazing experience in Dubrovnik and hopefully next time we will be able to go on an epic Croatian road trip to see more of this beautiful country!

11 thoughts on “The Medieval Walls of Dubrovnik”