What to see in Montmartre Bohemian Paris

As I woke on our first morning in Paris, I slowly opened the blinds to expose the sun coming up shining its light on Sacré-Coeur Basilica. What to see in Montmartre I thought to myself. One of the advantages of being an early riser is the peace, quiet and serenity that comes in the early hours of the morning. Family travel can be loud and tiring.  You see, I am always awake and up between 5-6am most mornings. This is also true when we are on holidays. I often use this time to go walking the morning in Montmartre. Climbing stairs and walking streets, taking photos. 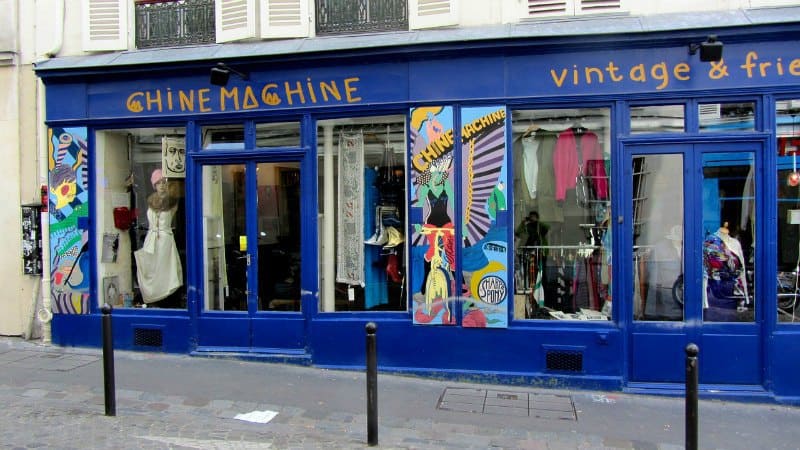 There is nothing better than capturing cities and towns when they are free of the masses of people that populate these locations. I love seeing cities just waking up. The cities shake the night off and prepare for another day. Streetscapes are best viewed deserted. My favourite place that I went early morning exploring last year was Montmartre in Paris France. This bohemian area of Paris is the highest point of the city.

We have stayed in Montmartre 3 times now and it’s one of those iconic Paris neighborhoods that is overcrowded during the day but virtually deserted prior to 7 am every day. Being out at this time also gives me a chance to see if there are any family activities in the area. Exploring Montmartre is a must and one of the many Paris budget travel idea’s 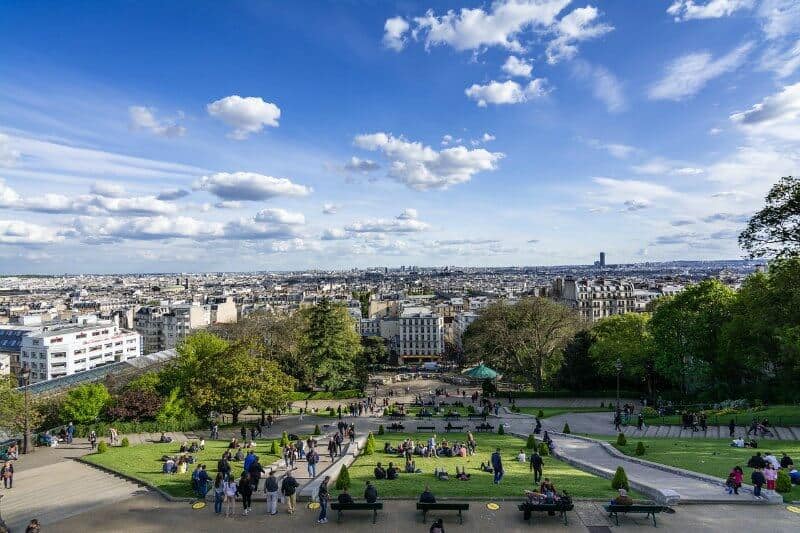 What to see in Montmartre

Once you get past the Butte (Hill) of Montmartre you would not even know you were in a big city. It had a real village feeling on the backside of Sacre Coeur. I am sure most tourists never get any further in Montmartre than Sacré-Coeur and well who could blame them? It’s a magnificent church.  There are charming little streets, stairways and kids playgrounds dotted all around. Montmartre even has its own winery on a small section of the hill behind Sacré-Coeur.

Where to stay in Montmartre

Located in Paris, Montmartre Apartments offers self-catering accommodation opposite the Sacré-Coeur Basilica. Some of the accommodations have free WiFi and free bikes are available to guests. The property is 500 metres from Pigalle. We have stayed at these apartments and can certainly recommend them.

For the latest prices and booking information CLICK this button

The wine is apparently world class and very expensive due to the small amounts made every year. There are plaques talking about the great artists who lived here. The Montmartre Cemetery is a tourist attraction for many. The Montmartre funicular has been taking locals and tourists up and down the hill since 1900. Our kids and countless others have enjoyed the Montmartre carousel at the bottom of the Sacre Coeur stairs. It’s one of those old style carousels with carriages and horses that bob up and down with the old time music. 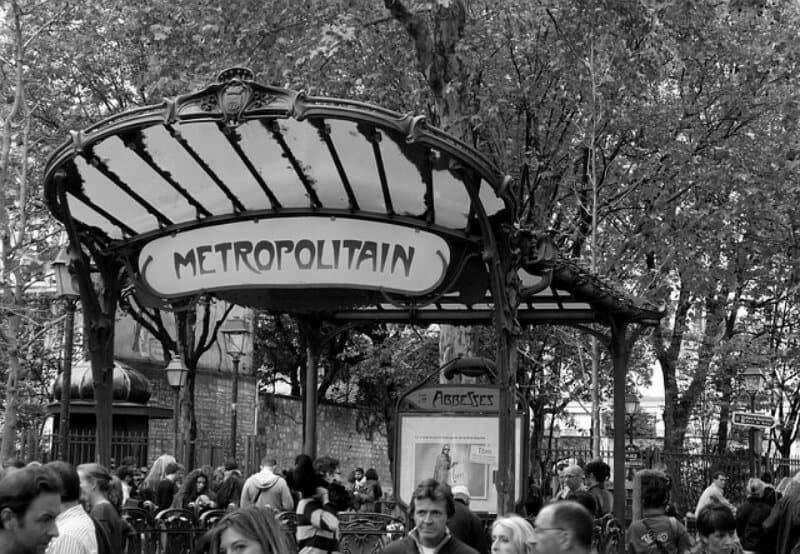 Montmartre metro station Abbesses is the most photographed Metro Station in Paris. If you have a canvas picture of Paris (the ones you buy in department stores) and it has a metro station on it, fair chance that station will be Abbesses. It’s an amazing station entrance in its art nouveau design. It is one of only two original glass-covered Guimard (he was the designer) entrances, called édicules (kiosks), left in Paris. It is also the deepest metro station in Paris at a depth of 36 meters down to the platform. I walked by this station 3 mornings in a row. Every morning I stopped and took another photo. I don’t know why, it was just so classical in design. It’s located on the western side of the butte of Montmartre. 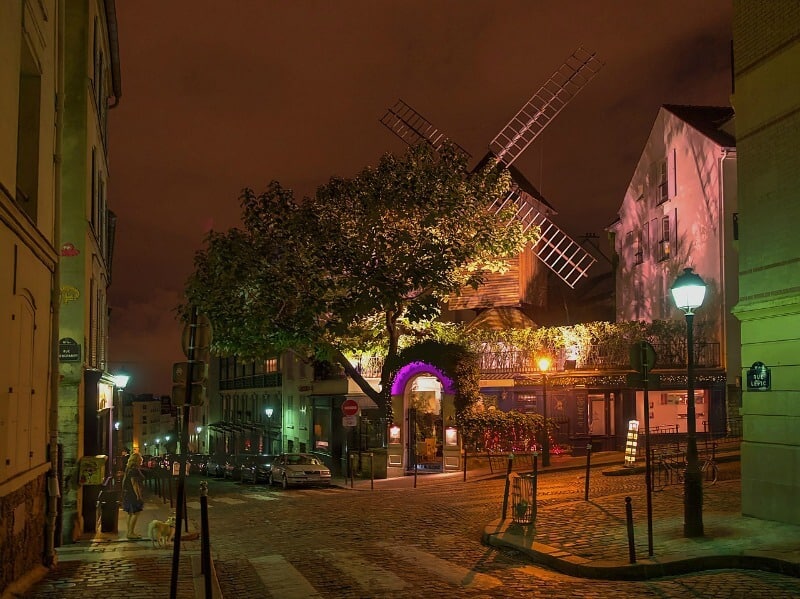 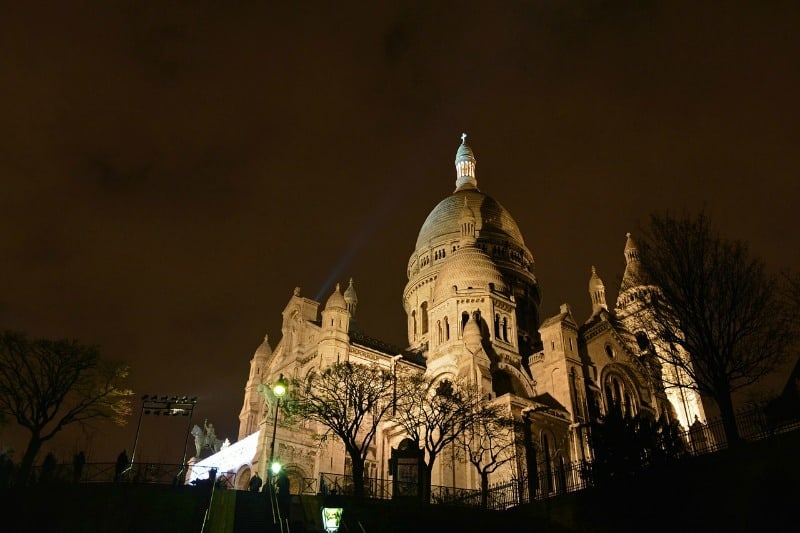 Montmartre what to do – Sacred Heart Basilica of Sacre Coeur

The Basilica is dedicated to the Sacred Heart of Jesus. It is also the highest point in Paris on the top of The Butte of Montmartre. The Montmartre Basilica is not old by European standards. It was started in 1875 and construction continued over the next 30 years. I have been to Sacre Coeur 4 different times over a 10 year period and it never ceases to amaze me. It is one of those must-visit spots in Paris.

I did notice last year the steps of Sacre Couer on Montmartre hill seems to be a spot for young people, travellers and revellers to meet for drinks in the evening. The grass hill leading up the Basilica is covered with people. Buskers and street artists are performing their acts, entrepreneurs are walking around selling beer. We stayed right across the road the last trip and watched the people enjoy themselves every evening at Sacré-Coeur or exploring Montmartre and all its sights. 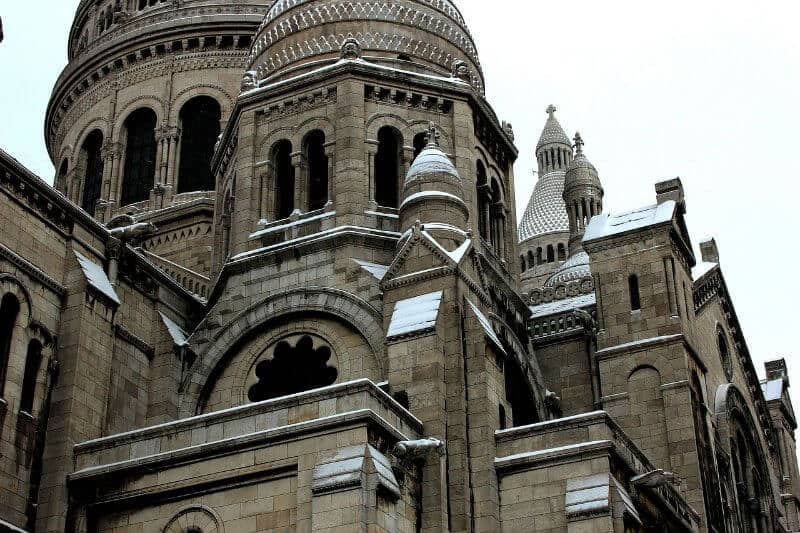 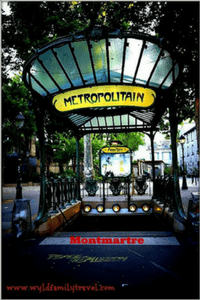 Place du Tertre is a small square just a few streets away from the Basilica of Sacre Coeur. It is often referred to as the Montmartre artists square. During the day, this square is teeming with tourists who are looking to get a feel of what Montmartre was like during the time when it was a painters haven. Place du Tertre is the home of Montmartre art. These days you will still find Parisians selling their art and drawing portraits in this Paris art district. This little square is surrounded by cafe’s, bistro’s and souvenir shops trying to get you to part with your dollars.

We enjoyed some ice cream while wandering the markets stalls in the square. Like all tourist traps, it is overpriced but a must see in Montmartre. Over 10 million people a year visit Place du Tertre, prepare for the crush when visiting during the day. Exploring Montmartre and all its sights. Place du Tertre can be accessed on a street leading off from the left-hand side of the Sacre Coeur Basilica. You can also head up an amazing amount of stairs from the Montmartre metro station Abbesses. 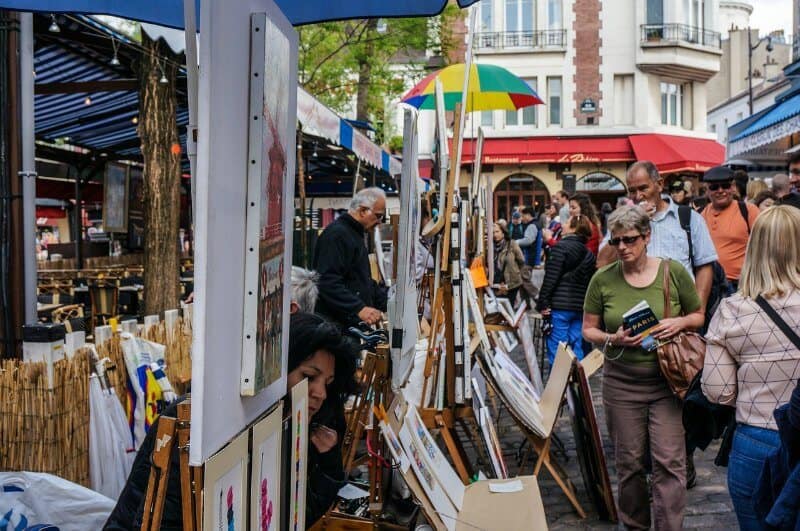 Do yourself a favour, stay in Montmartre and get out early and explore. Get the real bohemian feel that Montmartre used to have. Stop at a Montmartre cafe have an espresso and soak up the older parts of this neighbourhood. The parts that don’t experience a sea of tourists every day. Take a ride up the Montmartre funicular, walk down the Montmartre steps, see Montmartre at night. The Moulin Rouge is only a few steps away down the road. Montmartre to me feels neighbourly, it feels the less capital city and more like a village except with lots of visitors. Exploring Montmartre is a must do experience whether you are on a Paris layover, in the city for a few days or a few weeks, so if anyone ever asked you what to see in Montmartre, you can say PLENTY! 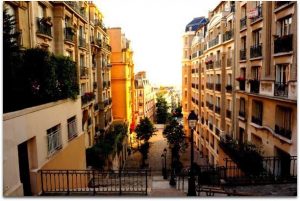 How to get to Montmartre:

The Paris Hop On – Hop Off tourist bus

Anvers is a station on Paris Métro Line 2

Abbesses is a station on Paris Métro Line 12

Below you will find 2 more Paris articles from Wyld Family Travel for your reading pleasure. Please click on the image to be taken to the article of your choice 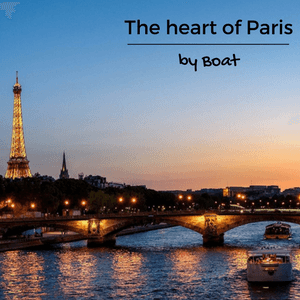 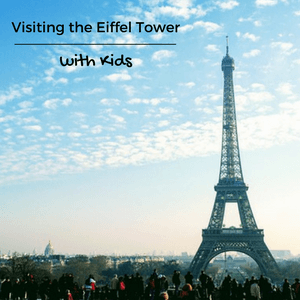