The question needs to be asked. Why would you want to make a day trip from a city as beautiful as Paris? What you maybe don’t know is that France as a whole is amazing with so many great sites that day train trips from Paris are a must on your vacation to Paris

There are medieval villages, chateaus, wineries, historical sites and more waiting to be visited on day trips by train from Paris. France has a history and culture dating back millennia that you can get a taste of in just one day.

Why take a day trip from Paris by train?

Luckily France has an amazing train network run by SCNF. There are three major SNCF trains you can take, the TGV, TER and Intercities will have at your destination in no time. The TGV the high-speed train network that departs and arrive from Paris on a daily basis, with destinations including Marseille, Nice, Strasbourg, Lyon and Bordeaux and more. Tickets for SNCF Trains can be booked online via Omio. There are many good trips out of Paris to be done.

What are the best day trips from Paris by train?

We will start off by looking at some of the best places near Paris to go by train. We had tried to recommend the easiest day trips from Paris by train with many popular destinations near Paris and ones that may be a little off the tourist trail.

These day trips from Paris are perfect for solo travellers, couples travelling to Paris and family vacations in Paris.

Disneyland Paris follows the tried formula that has made Disney a success worldwide. There is a Disney castle, space mountain and more. Disneyland Paris welcomed 15 million guests in 2019. Disney might be the most popular day trip from Paris by train.

Disneyland Paris lies around 40 minutes away by train from the city. You can get to the Paris version of Disneyland from 5 central Paris RER A Stations. The stations are Charles de Gaulle Etoile (at Arc de Triomphe), Auber (at Galeries Lafayette shopping center), Chatelet Les Halles (underground shopping centre), Gare de Lyon (largest Paris train station), and Nation.

There are 130 trains a day running this route, about 1 train every 15 minutes heading to Disney. A one-way train ticket will cost you between 7-10€.

A train to Versailles

The Palace of Versailles was the royal residence of France from 1682, under Louis XIV, until the start of the French Revolution in 1789. Today it is one of the major tourist attraction in all of France. The Hall of Mirrors, the amazing gardens and Marie Antoinette’s cottage are all worth visiting.

It takes around 1 hour by train from Paris to Versailles. You will need to a train on the RER C line, major staions include St-Michel (near Notre Dame), Musée d’Orsay, Invalides, Pont de l’Alma, and Champs de Mars – Tour Eiffel. You will arrive at Château Rive Gauche station in Versailles.

A return ticket will cost you under 7-10€

Save time and buy your Versailles entry ticket here

Provins is a medieval town located a short train trip from Paris. Provins was and still is a fortified medieval town. It was a well-defended market town at the crossroads of nine main roads and eleven secondary roads. This made Provins France an ideal place to hold medieval fairs with traders from all over Europe converging on the city 3 times a year.

During the week up to 20 trains, a day run the Paris Provins route with the earliest train starting between 7 & 8 am. The last train for the day leaves around 10,45pm arriving in Provins a little after 12 pm. On weekends a train leaves every hour from 7 am to 10 pm. It takes 1 hour and 24 minutes to get to Provins France by train. A Paris to Provins train ticket will cost you between 13 and 16 Euros one way.

Read more. If you are visiting Provins from Paris by train here is our Provins travel guide so you can plan your hassle-free day trip.

Colmar is a city on many bucket lists. This amazing medieval town lies nearly to Germany in the east of France. Colmar is most popular for its Christmas Market, Beauty, fairytale-like old town area and wine. No trip to France is complete without visiting Colmar

There are a number of options for getting from Paris to Colmar by train. The fastest and most efficient method is with the TGV High-Speed train network in France. Although there is no direct TGV Paris to Colmar line, you can arrive at Strasbourg and catch a regional train to Colmar. It will take around 2.5 hours to reach Strasbourg and another 30 minutes to Colmar. There is an average of 29 trains a day between Strasbourg and Colmar, leaving approximately every 36 minutes

A return ticket to Colmar will cost anywhere between 50-100€

Dunkirk (English) or Dunkerque (french) is a small city on the northwest coast of France. Dunkirk was an important site during WW2. Dunkirk was the scene of a major turning point in history. During the Second World War, the famous Operation Dynamo succeeded in evacuating more than 338,000 soldiers to England, in only nine days. Today you can visit the beaches and museums about WW2 or catch a ferry to England. This is one of the more interesting day trips from Paris by train.

A day trip to Mont St Michel is a highlight of any trip to France. The island and its imposing medieval cathedral lie approximately one kilometre off the country’s north-western coast. Most of the time it is surrounded by vast sand tidal flats and becomes an island only when the tides are very high. Built in the 8th century, it has been a pilgrimage site, stronghold during the war, prison and now major tourist attraction

Take the TGV from Gare Montparnasse in the centre of Paris to Rennes. The train ride will be about two hours and cost around €56. Next door to the Rennes train station is the bus station. Catch a bus to Mont-Saint-Michel and takes about an hour and 20 minutes. A one-way coach ticket is around €15. Total travel time will is over 3 hours so an early start is a must.

Avignon in southern France is famous as it is the city to which the Popes fled when leaving the corruption of Rome in the 14th century. Roman Catholic papacy was based in Avignon during the period 1309–77. The papal residency left behind the largest Gothic building of the Middle Ages.

Your train departs from Paris’ Gare du Lyon and arrive at Avignon Centrale train station. The SNCF Paris to Avignon train journey takes as little as 2 hours and 53 minutes to arrive in Avignon. There are 18 trains per day running from Paris to Avignon, the first train pulls out of Paris at a little past 6 am

Tickets to Avignon start at €45 when booked in adavance

Epernay is in the heart of the Champagne region. Famous champagne houses Moet & Chandon, Perrier Jouet and Pol Roger are in and around Epernay. Once you get to Epernay spend your day on the Avenue de Champagne visiting the Wine houses or take a tour.

Trains from Paris to Epernay take around 1 hour 20 minutes. The first train to Epernay leaves around 6.30 am. There are around 20 trains a day travelling each way between the 2 cities. You can pick up tickets for as little as €10.

Visit another country by train from Paris

London from Paris by train

London the capital of England, an iconic destination with its Bridge, tower and world-renowned theatre. There are so many things to do in London that one day will not do it justice. A small visit is better than none. We suggest you do a hop on hop off tour to see all the major sites in one day.

The Eurostar runs from Gare Du Nord in northeast Paris to St Pancreas In London. The Eurostar will take you 2.5 hours on average to reach London. The first train of the day runs prior to 6 am so an early start is the best suggestion for seeing all of London. This will be a long day tour out of Paris.

A return ticket to London will cost anywhere from 80-140€

Book a Paris hop on hop off bus tour

The capital of the Netherlands is an amazing city. A visit to Amsterdam can include many unforgettable experiences such as visiting Anne Frankhuas, taking a cruise on the amazing canals, or viewing some old world masters by Van Gough or Rembrandt. A stroll around the city is quite easy with the centre very compact. Maybe visit Vondel Park or the Heineken Experience. Amsterdam has something for everyone.

The fastest way to travel from Paris to Amsterdam is by taking the high-speed train. This fast, modern and luxurious train will get you to your destination in just under 3 hours and 20 minutes. There are about 12 trains a day that runs from Paris Nord station to Amsterdam Central Station. The cost is between 50 and 200 euros.

Located at the foothills of the Black Forest and in the middle of the Baden wine region is Freiburg. Freiburg is one of the greenest cities in Germany with many open spaces for relaxing. The city receives more sun than any other city in Germany. Famous for its centuries-old cathedral, a unique open water system that runs through the city. Freiburg is a university city so there is always something happening to see and do around the old town.

Paris to Freiburg im Breisgau train services depart from Paris l’Est station on the TGV. The fastest train takes a little over 3 hours and travels via Strasbourg where a change of train is required. This train runs twice a week. We suggest you book early to get the prices.

These 11 amazing destinations by train will complement any of the things you plan to do in Paris on your vacation.

We hope this article from us here at Wyld Family Travel has you inspired to visit Paris and take a day trip from the city. There are so many things to see in France that can be done in one day from Paris. For more amazing ideas on where to holiday in France click through to our France Destination Guide page for more brilliant inspiration.

More travel inspiration for your trip to France 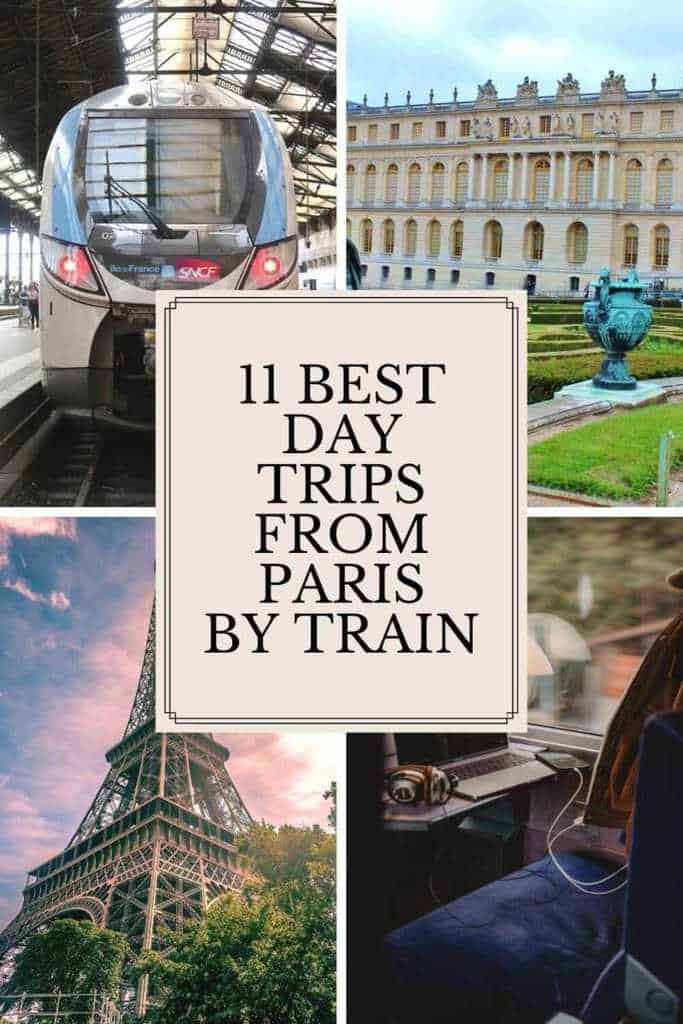