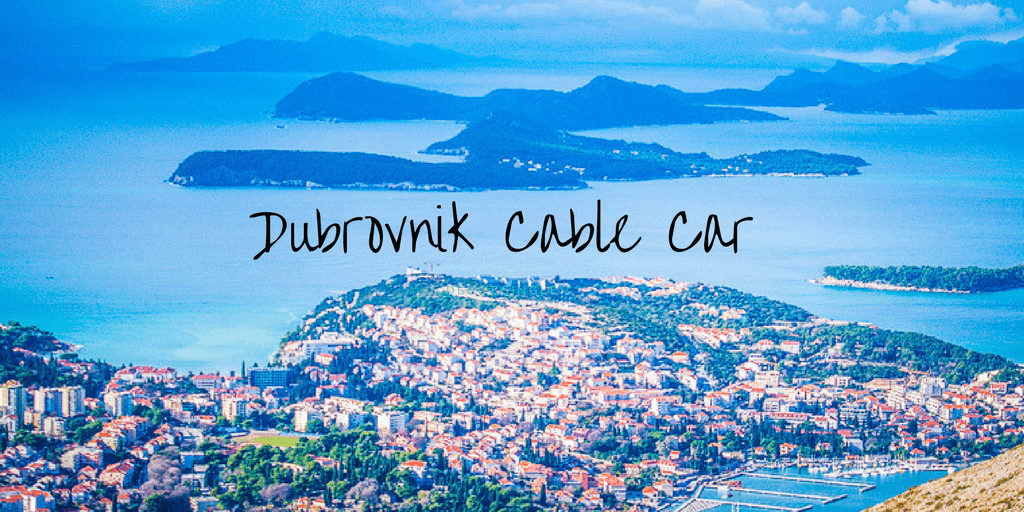 The Dubrovnik Cable car whisks people up the 405 meters to the top of Mount Srd. The Dubrovnik cable car like many others worldwide trades on the view it provides its customers. The view of the Adriatic coastline with its blue waters, little islands and the amazing Dubrovnik Old Town is absolutely breathtaking from the moment you leave the first station.

Here at Wyld Family Travel, we love a good cable car, gondola or ski lift. Our kids love these things and we have been on some beauties such as The Eagle near Melbourne Australia and The Barcelona Cable Car. The girls were pretty excited when we arrived in Dubrovnik, I pointed straight at the cable car on the mountain and said “tomorrow we are heading up there” 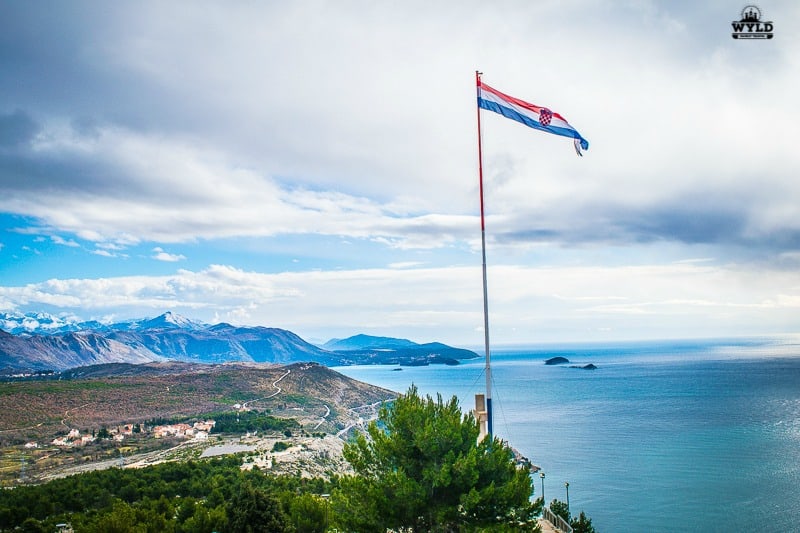 The Dubrovnik Cable Car location is a short 5-minute walk from the Old Town. There are a number of different routes you can take to reach Cable Car from Dubrovnik Old Town. two of the routes lead you from Pile or Ploče gates. Expect to take  8-12 minutes to walk around/behind city walls. The pedestrian footpaths from Ploče or Pile gates to the lower station is quite easy to walk towards Cable Car.

The quickest way takes 6-9 minutes, is by walking up the stairs from Stradun (towards Buža gate), and from there it takes just a minute of a walk across the parking lot towards the Dubrovnik cable car base station, but it has a lot of pretty steep stairs and is intended for people in good shape. We can attest to this that the stairs are steep, plentiful and uneven in height. Just over the road is an amazing bakery that sold traditional Croatian foods and pastries. You will find the food prices in this part of Dubrovnik a lot cheaper than in the Old Town.

If you are docking in the Dubrovnik cruise port the easiest way to reach the Cable Car is by local bus # 8 or taxi. Walking distance from the Port of Gruž to Ploče where the lower station of the Cable Car is located is circa 4,5 km (uphill & downhill). Expect this to take you an hour to walk there.. 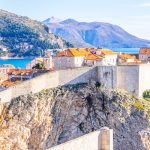 The tour begins with a cable car ride from the newly-opened cable cars station in the Old Town of Dubrovnik. On the return journey to the main Station, your tour guide will lead you by foot to the Old Town of Dubrovnik. Though it has been subject to fires and catastrophic earthquakes, the gorgeous city has always risen again to retain its title as the world-famous treasury of cultural monuments 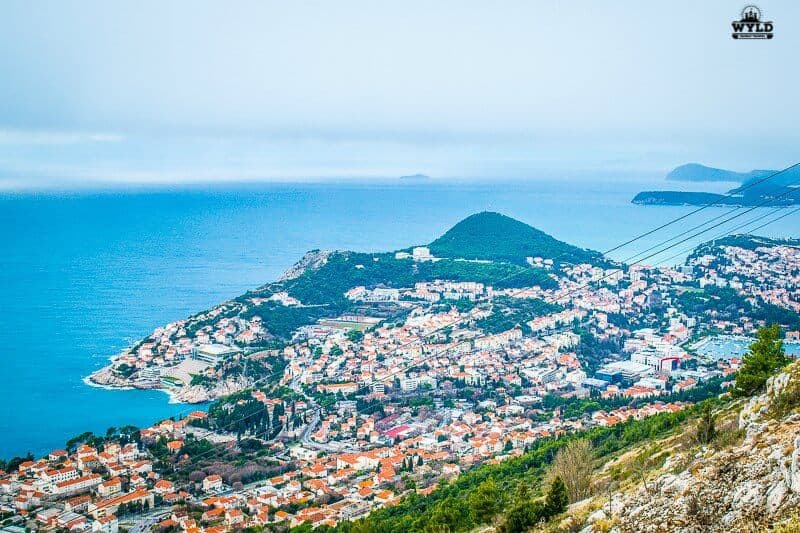 The cable car in Dubrovnik first sprang into life in 1969, becoming a major tourist drawcard in Dubrovnik. The cable car operated successfully until the early 1990’s when it was destroyed in the Croatian War of Independence. It took another 15 years after the war finished for the cable car to re-open in 2010.

The journey to the top takes 3-4 minutes to reach the summit station on Mount Srd. The Cable Car in Dubrovnik can hold up to 25 people. The view as you rise up above the residential houses of Ploce and the Old Town slowly appears before your eyes are truly memorable. The Old Town then seems to pale in comparison to the beauty of the Adriatic Coastline as it stretches out as far as the eye can see in both directions.

The Dubrovnik Cable Car and station is fully accesible for people with a disability in wheel chairs. This includes access to both stations, access to the cabin, restrooms and an elevator.

Where did we stay in Dubrovnik

The Peti Apartment is located in the Dubrovnik Old Town just one block away from the Stradum the main street. The apartment is fully self-contained with cooking facilities, washing machine, wifi and air conditioning. Containing one queen size bed and two singles it perfect for families, couples or small groups. The Srd Hill Dubrovnik cable car is a 5-minute walk from the apartment

Best Places to stay in Dubrovnik

Things to do on Mount Srd Dubrovnik

At the summit cable car station, you will find the Panorama restaurant Dubrovnik.  I challenge anyone to show me a place to have a meal, coffee, beer or wine with a better view anywhere in the world. The view is all-encompassing as it spreads in front of you in either direction through the big glass windows.  We enjoyed a coffee and some traditional Croatian cake at the Panorama restaurant Dubrovnik.

The summit station also has a gift shop to buy your souvenirs as a memory of your trip on the cable car. Outside there is numerous viewing platform to get great photos. This would have to be the most Instagramable spot in Dubrovnik. Don’t forget to turn around though and get some amazing views of the mountains!

For those that don’t like the heights of the cable car, there is a path up the hill that can be walked. I would advise not trying this if you were not fit as it looks a long way up zig-zagging across the mountain. A taxi can also be taken to the top if you are eating at the Dubrovnik Panorama restaurant. As some of you may know Bec does not like heights at all but she was fine in this cable car. She sat down on the bench and found the ride up quite fine. 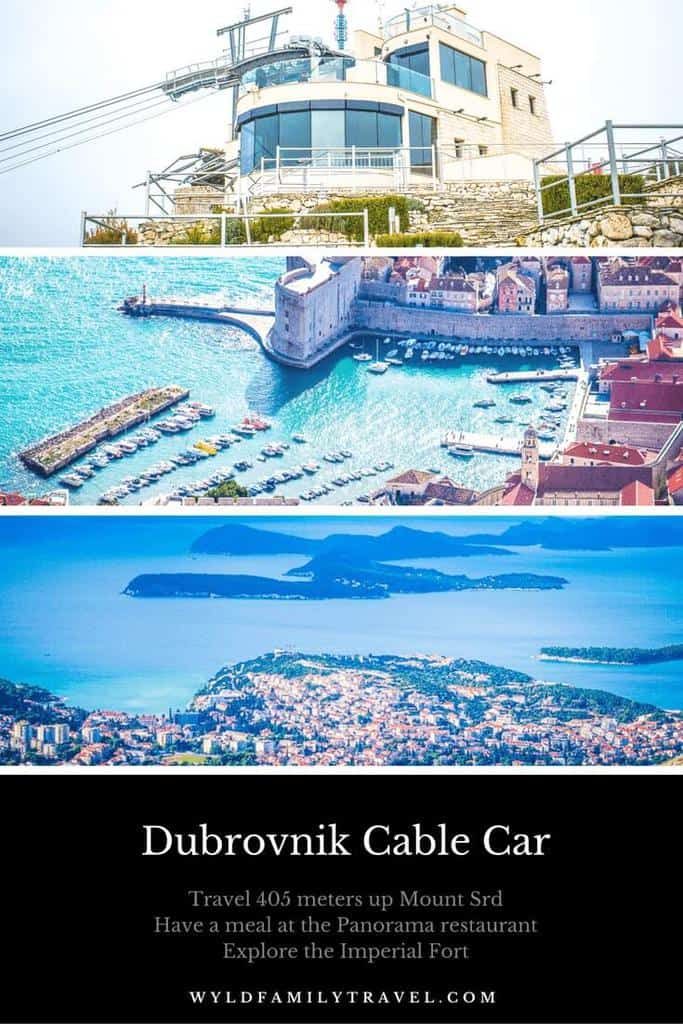 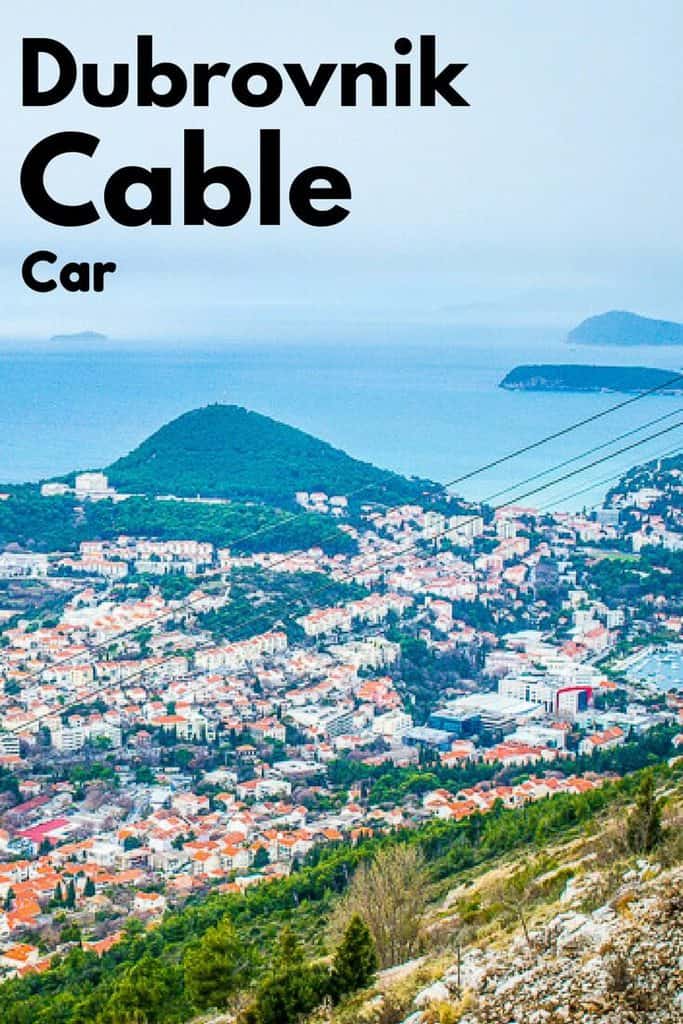 A short 5-minute walk from the summit cable car station is a Fort Imperial Dubrovnik. The fort was built by Napoleon and was finished precisely on his birthday, meaning that the fort and Napoleon celebrated their birthdays on the very same day. The fort is known for The Siege of Ragusa was fought between Austrian Croat troops against a French garrison between 19 and 27 January 1814 during the Adriatic campaign of the Napoleonic Wars. In 2012, Fort celebrated its 200th birthday. Today the Fort Imperial is in a semi-state of disrepair.

You are able to wander around the outside and do some exploring on Mount Srd Dubrovnik. A few rooms are still open and house the Dubrovnik Homeland War Museum. During the Homeland War, the fort was the first line of defence of Dubrovnik and housed the Command HQ of the 163rd Dubrovnik Brigade of the Croatian Army. We found the museum very interesting. To be honest we had never heard of the Homeland War before. These sort of museums are great to learn about the history of places you visit. Willow found the movies that were shown explaining the war very informative, we find that the kids react to visual history really well. The museum is a great way to bring life to Fort Imperial

On top of Mount Srđ, behind Fort Imperial, there is a hiking trail for you to explore. The trail will provide breathtaking views that include the city of Dubrovnik, surrounding islands and the amazing coastline of the Adriatic. The hiking trail leaves from Fort Imperial to Fort Strinčjera. Fort Strincjera is easily reached on a 1.3 km stroll from Fort Imperial. The road you follow, Macadam is easy for walking with no steep inclines. The trail takes you through part farmland where you will see animals and into the forest before you reach Fort Strincjera. The fort was built between 1886 and the start of the 19th century. Today there are a few ruins left for viewing including two round towers. The Fort also acts as a memorial site for soldiers who died while fighting here in the Homeland War. 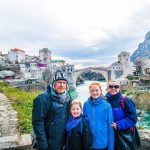 We enjoyed this amazing tour on our stay in Dubrovnik. The Stari Mostar Bridge is one of the most iconic bridges in the world. The Mostar old town sells many fine handcrafted items to buy. The food in Mostar was amazing. We enjoyed a tour through Mostar then free time. Well worth it for an amazing experience.

Operating hours vary depending on the month of the year. The cable car runs as soon as there are enough passengers. The last departure from the lower Dubrovnik cable car station is thirty minutes before closing time.

Where to stay in Dubrovnik:

The Dubrovnik Tourist Information centre was nice enough to provide us with free passes to use on the cable car. Most of all this in no way influences our review on our experience.

Here are two more articles from Wyld Family Travel that may be of interest to you. Both these destinations one in Bosnia and one in Montenegro are easily reachable as a day trip from Dubrovnik. Click the image to read the article. 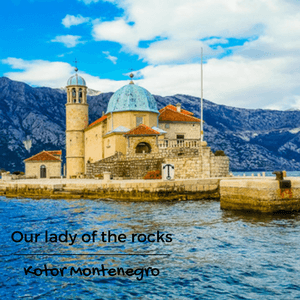 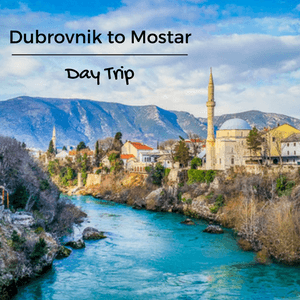 8 thoughts on “Dubrovnik cable car a ride up Mount Srd”