Kotor Montenegro is just one day trip that you should make from Dubrovnik. For us here at Wyld Family Travel we will tell you that Kotor is the most beautiful place in the whole of Europe.

Why should you visit

hills seem to rise straight up from the waters of Kotor Bay enclosing this Fjord like a land lost in time. Snow-capped peaks, blue crystal clear waters, and a thousand-year-old castle is what you will find if you visit Kotor.

The Dubrovnik to Kotor drive is a 92-kilometre trip. Dubrovnik to Montenegro Border is only half that distance. This is a short distance but you should allow over 2 hours for the journey each way on a Dubrovnik Kotor trip.

You see Croatia and Montenegro are not part of the European Union and border controls are still in place. So whether you are on a bus from Dubrovnik to Kotor or driving to Kotor you will be stopped 4 times on your return journey.

You stop going out of Croatia then a few hundred meters along you stop going into Montenegro. They tell me this can be a long and irritating process in the summer months sometimes taking over an hour. We were lucky we visited in the winter and were through in 5 minutes.

It’s actually a bit amusing stopping at the border it is like going back in time to cold war days. A gruff looking man approaches your car, demands your passport, they whisk it away into an office or a booth only to return it a few minutes later with a stamp and your Dubrovnik Kotor journey resumes.

There are only 3 ways we can see that you can do the Dubrovnik to Kotor day trip.

Tour from Dubrovnik to Kotor

What I will say is MAKE SURE any tour you book features a visit to the old towns of Kotor and Perast and a boat ride to the island of Our Lady of the Rocks. You can browse and book many of these tours with Get Your Guide right here.

Book all your Dubrovnik to Kotor tours here. There are many different options available

Bus from Dubrovnik To Kotor

You will need to stop at both Croatia and Montenegro border. Your passports will be taken away for immigration to stamp and will be returned to you to continue your Dubrovnik to Kotor trip

Dubrovnik’s main bus station (locally called Autobusni Kolodvor) is located right next to the main ferry terminal in Gruž harbour/suburb about 3 km from the Old Town. You can get a bus to the bus terminal for your Dubrovnik to Kotor bus connection from just outside the old town city walls.

Dubrovnik to Kotor by car

The distance between Dubrovnik and Kotor is 94 kilometres. Renting a car will give you the most flexibility in driving from Dubrovnik to Kotor by car. It will allow you to have the option to explore beyond where the bus takes you. It especially allows you freedom from what the tour group have organised.

Some unscrupulous companies are known to charge an extra $90-150 USD for a cross-border card. The short answer is no you don’t need to pay extra. Both Montenegro and Bosnia-Herzegovina are included in the green card system that your car rental insurance company supply for travel within Croatia. You can read more about it on the website of the National Green Card Bureau.

Sights to see on your Dubrovnik Kotor day trip

Our Lady of the Rocks

Our Lady of the Rocks is one of 2 small islands that sit in the UNESCO World Heritage Kotor Bay on the coast of Montenegro. The island is one of the most famous sights in the Bay of Kotor. What makes Our Lady of the Rocks so interesting, besides its location in one of the most beautiful spots in the world is that it is the home to a legend associated with the Virgin Mary.

Over the centuries rocks were thrown into the water, ships were sunk until an island was created. Church of Gospa od Skrpjela as it is called in Montenegro is the dominant feature on the island in Kotor Bay. It is practically the only thing on the island besides a small storage and maintenance shed.

Inside the church, you will find a beautiful marble altar that was crafted in Genoa and shipped to the church in 1796. On the ceilings and walls, there are 68 canvas pictures of the Virgin Mary depicting her life. There is also a museum housed in the church.

Let me start by saying that the view from Kotor Fortress is amazing, maybe the best in all of Europe.  Secondly, I will tell you its 1500 steps to the castle and the only way there is by foot. A quick rundown on Kotor Fortress. There has been a fortification on the site since the time of Christ. In the 6th century, the emperor Justinian I took control of the site and built the fortress.

The fortress remained pretty much unchanged over the next 800 years until 1420. The rulers at this time The Republic of Cattaro finally gave in to Venetian control. Under the Venetians, the Fortress was upgraded and the Mountain fortifications were constructed to look like as you see it today.

We will say it was not an easy climb but you are rewarded everytime you stop with an every expanding ever more beautiful view. As you get closer to the stop top, you’ll see a sign on the walls pointing to your left to the Chapel of St Ivan. This is where the magic begins, an Alice in Wonderland moment was upon us.

There is a hole in the fortifications wall leading to what can only be described as a step back in time, into the land from another time, into Alice in Wonderland I heard it described as. You will find remains of an 11th-century building and an old rundown chapel still standing with fading frescos on the ceiling.

There are few things as rewarding as reaching Kotor Fortress. The final few steps to the highest perch that allows you the picture perfect view. A view that is breathtaking at the least and awe-inspiring for all who make it.

On a day trip from Dubrovnik to Kotor visit, Kotor Old Town

Kotor Old town is a winding labyrinth of streets and squares surrounded by the defence walls facing the bay. Mountains acting as barriers lie behind the old town. Unlike most old towns that have one large central square, Kotor old town has many small squares with narrow streets leading in all directions. You will find restaurants, shops, cafe’s, hotels and hostels.

Now is the time to visit Kotor old town before the lure of tourism drives the original business out. Soon to be replaced with souvenir shops that service the cruise lines that pull into the port of Kotor. In the summer months, the port of Kotor is kept busy daily with ships coming and going.

According to legend, the body of St Tryphon was brought here by Venetian merchants because they were forced to seek shelter in the Bay of Kotor due to bad weather. The citizens of Kotor decided to buy the remains of St Tryphon and make him the patron saint of Kotor.

The inside of the cathedral contains fresco painted by Greek masters in the 14th century. A collection of religious relics are on display in the small museum on the second floor of this Papal Basilica. The highlight of the collection is the hand of St Tryphon. Its housed in a glove made from silver.

Tanjga The best of Kotor Restaurants.

If you only get to eat in Kotor at one place make sure it the amazing Tanjga restaurant. It is located just 100 meters away from the south gate entrance to the Kotor Old town. We were greeted by the owner a larger than life character big in stature, big in voice. Seizing on our indecisiveness he said to leave it me I will bring you food. We sat down and waited.

We were presented with a massive platter full of what can only be described as a party for your taste buds. It had meats of lamb, beef, pork and chicken. Adorned with amazing roast potatoes that cook in a rotisserie and collect flavour from the drippings off the meat. Fresh tomatoes and vegetables make this a meal many will be unable to finish. We can’t speak highly enough of Tanjga. It is certainly one of the best Kotor Restaurants. Don’t be fooled into eating in the old town eat at Restaurant Tanjga.

Is there a Dubrovnik to Kotor train:  There is no direct train route between these two destinations

Is there a Dubrovnik to Kotor Ferry:  The only ferry from Montenegro runs to Bari in Italy

Dubrovnik to Kotor Transfer: A transfer between these 2 destinations will cost you from $150 USD upwards.

How far is Kotor to Dubrovnik: 92 kilometres is the distance you will cover to get to Dubrovnik.

Where to stay in Dubrovnik

(All coloured text in the Getting to Dubrovnik, Getting around Dubrovnik and Where to stay in Dubrovnik links to the pages mentioned for your information and booking convenience. We at Wyld Family Travel will make a small commission from any bookings you make. This money goes into maintaining our website)

We hoped you enjoyed this article from Wyld Family Travel. Please find 2 more articles for your reading pleasure below. Just click the image to be taken to the story. 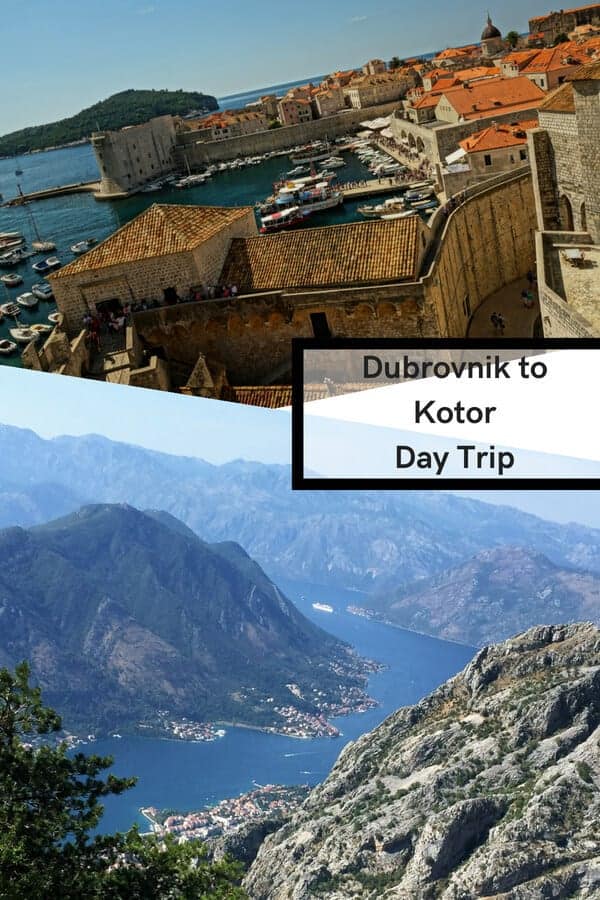 2 thoughts on “How to get from Dubrovnik to Kotor”