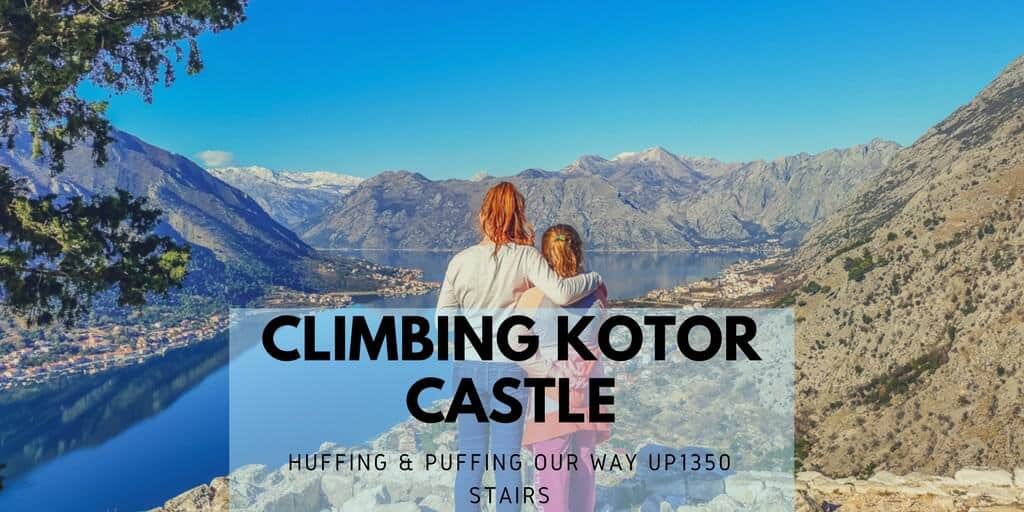 Our time in Kotor Montenegro was going to be short but we had to visit Kotor. We had read our Montenegro Lonely Planet guide and picked out Kotor as our one stop in Montenegro.  We only had 2 days in this beautiful UNESCO World Heritage site and we were all so excited to visit Kotor. We arrived on the Dubrovnik-Kotor bus after spending a few days in Croatia. The Kotor bus station is located a few hundred meters from the Kotor Old Town. Towering above the Old Town is Kotor Fortress or otherwise known as The Castle of San Giovanni Kotor. The Fortifications of Kotor Fortress run all the way down the side of the hill to meet with the Kotor city walls.

It is truly an amazing sight, it seems to catch your attention no matter where you look in Kotor. We had read about Kotor Castle and we had seen pictures of Kotor Castle but there is nothing like seeing it in person. It looks like it is hanging off the side of a cliff. After a short look, it was settled the Wyld Family Travel were going Castle climbing. Anyone who knows us knows we are more overweight than under weights, we are more cable car than a hiking trail, we are more look up at it than looking down from it if you get my drift. Just to clarify there is no cable car up to Kotor Fortress much to the dismay of our children. But could we visit Kotor and not climb all the way to the top?

Where did we stay in Kotor

A quick run down on Kotor Fortress. There has been a fortification on the site since the time of Christ. In the 6th century, the emperor Justinian I took control of the site and built the fortress. The fortress remained pretty much unchanged over the next 800 years until 1420. The rulers at this time The Republic of Cattaro finally gave in to Venetian control. Under the Venetians, the Fortress was upgraded and the Mountain fortifications were constructed. From the 14th century to present the castle has been held by Hapsburgs, The Napoleonic Kingdom of Italy and the Austrian Empire, Yugoslavia and finally an independent Montenegro. The castle and its fortifications have survived severe earthquakes that damaged its structural integrity in 1563, 1667, and most recently, on April 15, 1979. 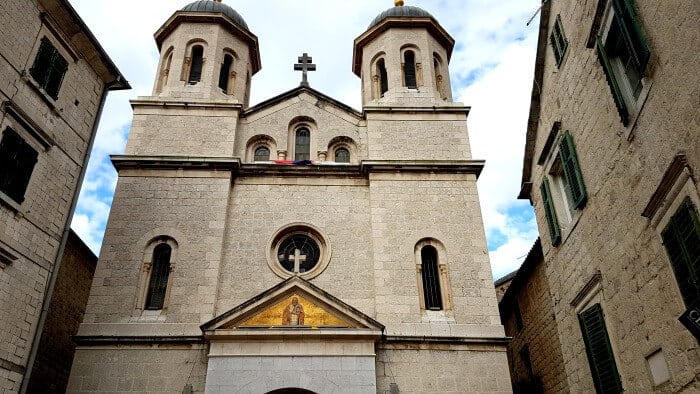 We set out from our apartment and walked through Kotor Stari Grad past Kotor Cathedral area till we reached the start of the steps. You won’t need a Kotor map to find the entry it is sign posted very well. What an intimidating sight this is for a family of two young kids and two unfit parents. At this point, I will put my hand up and say I was not keen it was only at Rebecca’s urging that we undertook this mission. There was no ‘if you choose to accept’ it was just we were doing it…mum said so. We started the rigorous castle climbing towards Kotor Fortress at a slow pace with less than a steely resolve to make it to the top.

This private Kotor Walking Tour is the perfect way to get to know more about the history and heritage not only of this town but Montenegro. Be led by a local licensed tour guide who will introduce you to this UNESCO World Heritage Site since 1979. Kotor is just amazing with an equally impressive history

Get the latest PRICES here on this amazing tour

To be honest, at this stage we thought if we make it to the Church of Our Lady of Health it would be a small miracle. It would be something to celebrate through the ages of Wyld Family history, something to be shouted from mountain tops, well maybe low-level mountain sides at the very least! As you look upwards at the inspiring Kotor Fortress and endure the thought of your leg muscles contracting on every one of the 1350 steps you can’t help but say in your head I think I can, I think I can! 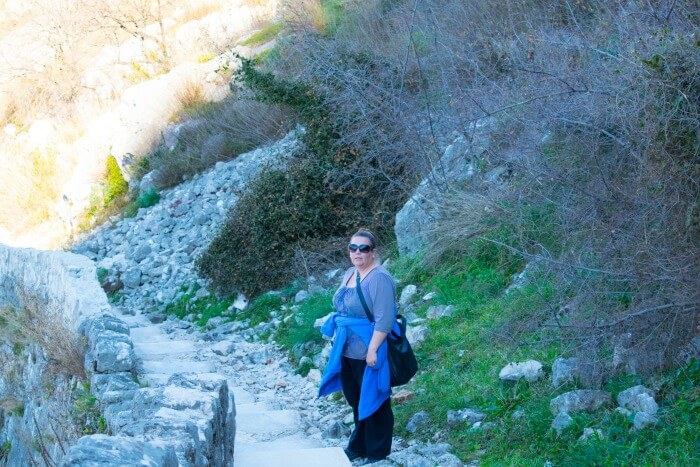 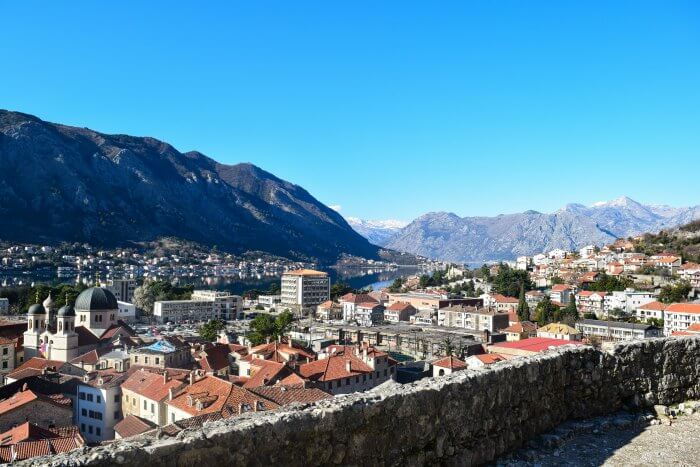 Willow took off scaling the uneven broken and crumbling steps like a seasoned mountain climber. Really it had more to do with her saying I got there first. With every step, the view became more amazing as Kotor Bay came into view. The Bay of Kotor starts stretching out in front of your eyes. In what seemed like an eternity but was really more like 40 minutes of slow snail-like pace we reached the church. We sat down for 10 minutes drank some water, the kids patted a few cats that were running around, it was all very nice and relaxed. Somewhere between the first step and the church, my ambition overtook my level of fitness and at my urging ignoring my families calls of ‘are you crazy?’ we all continued on. 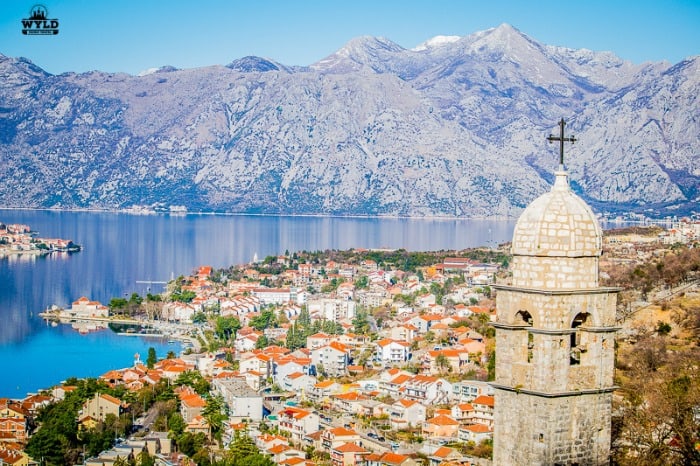 Best things to do in Montenegro – Kotor Fortress is a must

The march to the top started, up and up we went with at times an uneasy feeling that all that stood between us and the sheer cliff drop was the crumbling fortification walls that are nearing their 700th year. There was more than one scream aimed at Willow and Marley to get back from the edge.

As you get closer to the stop top, you’ll see a sign on the walls pointing to your left to the Chapel of St Ivan. This is where the magic begins, an Alice in Wonderland moment was upon us. There is a hole in the fortifications wall leading to what can only be described as a step back in time, into a land from another time, a time long forgotten. The climb through the hole in the wall is not the most safety conscious thing I have ever done with my kids that’s for sure. Actually to the point where I was pretty worried about their safety.

Alice in Wonderland here we come

You need to step onto the small rocky ledge with a 3-meter drop below as you and make your way along the fortification wall until you hit land. For me, this was maybe the highlight, there were ruins of a 12th-century village that was part of the trade route that linked inland Montenegro with the Bay of Kotor and the coast. It was magical in there. It was like no one else existed, it was peaceful, it was serene, well that was until Marley Wyld fell over and bellowing howls of her crying echoed through the small valley at decibels that would wake the dead. We took Marley back to Bec and put her back through the wall and Willow and I went exploring the Chapel and its century-old paintings that are slowly fading into history. 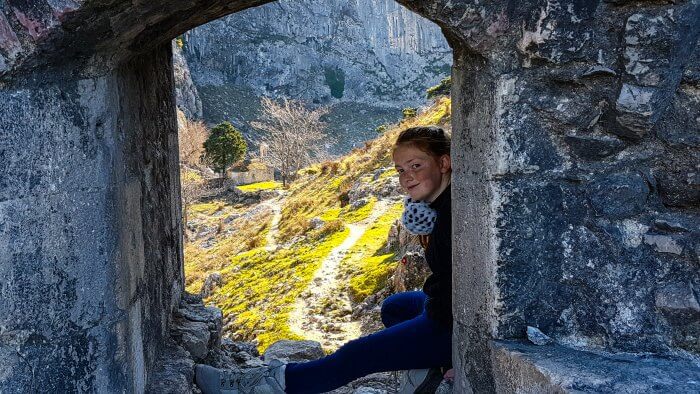 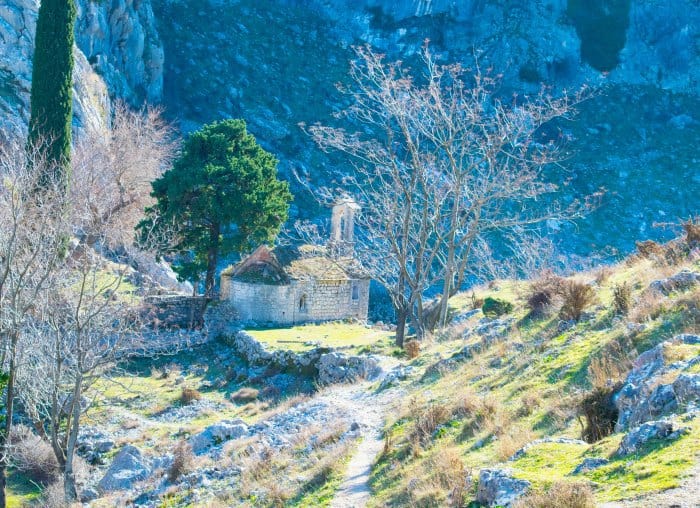 After emerging from Wonderland we convened a serious Wyld Family Travel committee meeting to discuss if Marley could go on or if our ears could bear the pain of Marley’s whining. We pushed on for the final assault on this Kotor Fortress Hike. We could nearly taste the satisfaction, the feeling of accomplishment at this stage not to mention the sheer burning of our lungs as we gasped for air. Still standing but maybe closer to crawling at this stage we reached the top of Kotor Fortress.

But like all things one more challenge presented its self. A steel walkway over a drop was present. For my wife, this was nearly the straw that broke the camels back. I could see beads of sweat breaking out on her forehead and a look of sheer panic something similar to when the jug of sangria is empty. The sweat was was more likely from climbing the mountain. You see my wife hates this sort of thing.

From Dubrovnik: Full-Day Tour of the Bay of Kotor

Discover the Mediterranean’s best-kept secret on a full-day tour to Montenegro, just across the border from Dubrovnik. Explore the impressive walled city of Kotor, visit the enchanting island of Sveti Stefan, and admire the terracotta roofs of Budva. Just two hours away by bus from Dubrovnik lies the real gem of the Baltics

No steel grates, glass floors or tree top walks for her just pure fear. With a little coaxing and reassuring, she was across it faster than Usain Bolt does the 100-meter sprint. We had made it all the way to 1200 meters above Kotor Old Town above the Kotor City walls above the Kotor Montenegro Crusie Port…we had made it. There was hi-fiving, fist pumping and smiles all around. 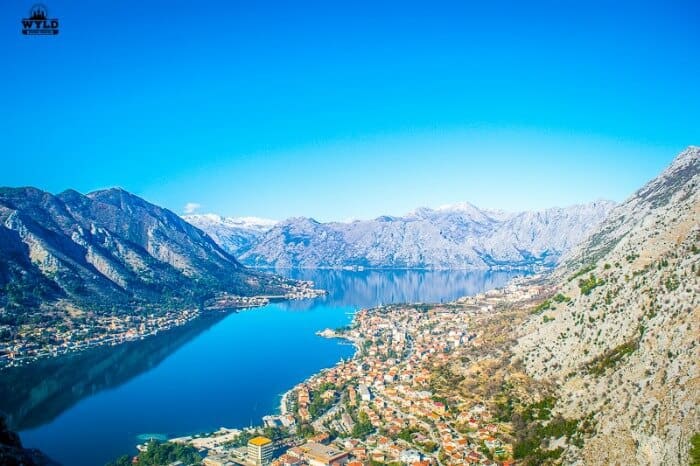 This may not be one of the top things to do in Kotor for everyone but I can tell you it’s not to be missed when you do visit Kotor. Words fail me when describing the views, the beauty,  the sheer magnificence of the snow topped mountains that seem to climb vertically out of the water. The all-encompassing 360-degree views of the magnificence that is Kotor Bay. Hiking Montenegro for us even if only in this one location is something we will do again. Just between you and me going downhill was just as hard on the feet legs and ankles. Scaling Kotor Fortress is one of the true highlights of our family travel adventures

Tips for climbing to Kotor Fortress

We have chosen two more stories for you to read. One more from Kotor and one from Montenegro’s neighbouring country of Serbia. We hope you enjoy them. Just click the image to read them. 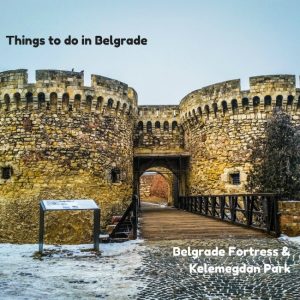 Wyld Family Travel is Mark, Bec, Willow and Marley. When we are not travelling, we live in small-town Australia. We are just a normal family with jobs, school, and a home loan. We have been to over 40 countries and continue to explore our home country as well.