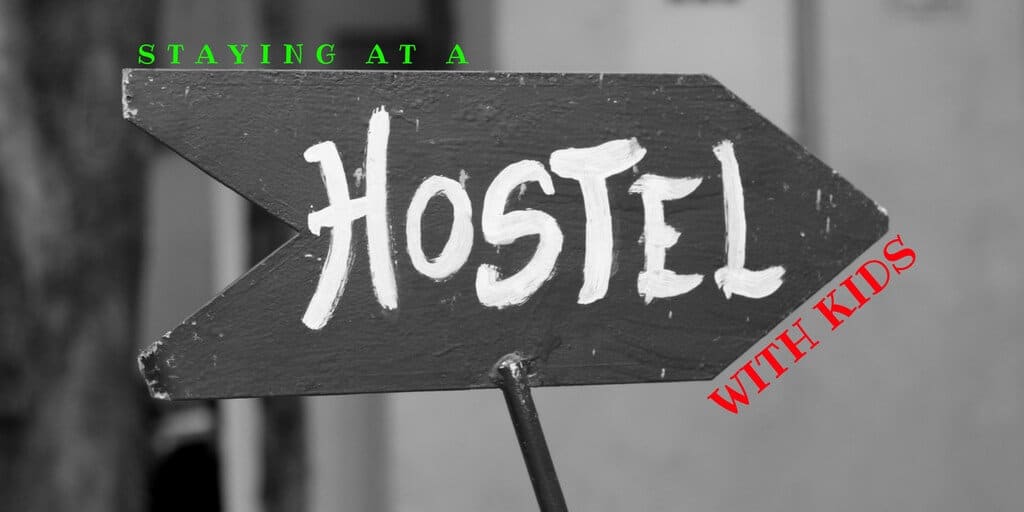 Party, party, party is what most people think when they think of staying in a hostel on a trip. When the idea was first bought up as a way to save money while travelling it was a hard no from me. There was no way I thought staying in hostels with kids was a great idea.

Well, I was wrong. It turns out I was very wrong. Hostels have come such a long way since the party days and are now one of the top accommodation options for families travelling on a budget. I am sure there are plenty of hostels out there still aimed at that market but if you pick your hostel well you are in for a brilliant family stay.

What is a hostel?

A hostel used to be low cost shared accommodation where travellers who are on a budget or looking to connect with fellow travellers would stay. Normally you will find dormitory style accommodation in a hostel with either single sex or mixed sex rooms.

Travellers would opt for this style of accommodation especially if they are solo travelling or travelling on a budget. Many hostels have common rooms for meeting new people, fully equipped kitchens to use, laundry and social nights.

Staying in hostels with kids

As I have said above young people would be known to stay in hostels for the party side of the accommodation. Now you will find that while you can still party there are a few more hostels that are marketed at families.

Why are hostels for families a great option?

Not only will you have an area to stretch out in like the common room you can prepare some of your favourites from home, get some washing done and most of all connect with other travelling families.

Kid friendly hostels allow them to talk to other people

After travelling with your family for a while you can become extremely boring to one another. You already know everything about them and now they are just becoming really annoying.

When we stayed in a hostels with our kids we watched as our daughters talked to other people about what they had been doing and where they had been. Whoever they were talking to were sharing their own tales. It was great to see our travelling teens interact with people older than themselves but on a level, they probably did not expect from girls their age.

Related posts: We know because we go. More amazing hostels for families

They traded stories with people much older than themselves

Willow can strike up a conversation with most people but Marley struggles. It surprised me that they both were happy to talk to other people about where they had been and where they were going. This also allowed us to join in the conversation too. Which led to us talking about something other than Minecraft and YouTube! It also helped the girls think about places they would like to go when they are older. There were so many stories of places they had not heard of. They both had a great time learning about those places and they were even able to give some tips to other travellers!

Both the girls have been to a few countries but for some reason, they were drawn to people where they had not been. They asked plenty of questions some extra cringe-worthy but most were happily answered…even the really cringe-worthy ones! This social interaction is only possible when hosteling with kids in a friendly environment.

Older people and other families stay in hostels

I was surprised at the number of families that were staying in hostels with kids and the age of their kids, some older families, some younger. There was a family with a small child that the girls fell in love with and they chatted and pulled faces at her. This gave them the break from all the adult conversations they had been having with other travellers and us.

It’s great to see them just get down and play with another child for a while. It also made us have a conversation about when we started travelling as a family and the reason’s why we decided to travel with the girls. It is great to hear why they think we travel and how they feel about it. Staying at a friendly family hostel was not just something we were doing!

Not only were there families but there were older people staying there as well. Both the girls were very impressed that some had just started travelling later in life. They happily sat down and talked about what their life had been like before they started to travel and why they had started at such a later age.

Some had started after the death of a family member or they had decided to travel with their family as they had not been able to when they were younger  It showed them how lucky they were to start at such a young age and your whole life can be filled with adventure not just in your younger years.

Hostels have all the facilities

After travelling for a little while kids may crave some ‘normal’ from home. You can get all the jobs done at a hostel with kids like the washing and cooking. Sitting down at the dinner table with a meal you have put together can be a really good way to go through what you have done during that day.

We find the kitchen table to be one of the places we speak freely to each other and staying in hotels can lack that at times or if you are eating out a lot. Staying in a hostel with kids can really let you have some of that normal family time especially if you are travelling long term with kids.

Some of the best hostels for families are in the best places in the city. Little legs can get tired and there’s nothing worse than a tired, cranky kid. Being in central locations most hostels will also be in backpacker areas so there is always a cheaper place to eat around. This can be great for travelling families as most kids love simple meals if you don’t feel like cooking at the hostel for the night.

There are kid friendly activities at friendly family hostels

One of the best things about the hostels are the games that they had or the games rooms. The girls played bocce, giant Jenga and at one stage even let loose on the dance floor! It was great to see them up and doing something rather than having their heads stuck in the iPads all the time when we were having some downtime downstairs. Yes, this staying in hostels with kids was working out. Hosteling with kids, who would have thought.

We also found that many place now have a bookshelf with books you can trade when you are staying at the hostel. While some of them were a little old for the girls there were some that I could swap out for too. Hopefully as more travelling families stay in hostels with children the bookshelves will get more reading material for younger people.

How can staying in a hostel with family help me?

Hostels these days serve as a one-stop-shop for all things tourist. Besides providing a room and place to stay most will have their own tour booking service. You may be able to hire bikes and scooters from them. They will certainly have maps and all the information you need about local public transport, where to eat and what to see.

While there are plenty of activities that are aimed at the younger clientele you can always ask for different activities and most of the time there will be a staff member more than happy to help you find something that the while family will enjoy.

Do we recommend staying in a hostel with kids?

For me a room with a private bathroom is a better option. Having two girls in the family we are always off to the toilet, so I prefer a room with a bathroom so I don’t have to go with the girls all the time. We travel as a family of four so a room to ourselves is not usually a problem.

For us, staying in hostels with kids was really positive. We found that everyone was respectful when there were kids around. Swearing was kept to a minimum and there were plenty of apologies if they didn’t realise. Maybe we were lucky with the groups staying there but for us and a sceptic like myself we would not hesitate in staying in hostels with kids again…just with my own bathroom! Kid-friendly hostels do exist and are easy to find.

We hope this article from us here at Wyld Family Travel inspires you to stay in a family-friendly hostel on your next trip. For more amazing ideas on hostels we’ve stayed at click through to our Hostels accommodation guide page for more brilliant inspiration.

More about the Author

Bec Wyld is a mother, wife, community care worker and once reluctant traveller. But now Bec has been to over 35 countries across the globe and is always seeking more adventures. She has planned, stressed, laughed and chatted in all of them. Bec’s writing can be found on Wyld Family Travel, as a guest poster on popular sites and contributor on travel websites including Lonely Planet Kids.