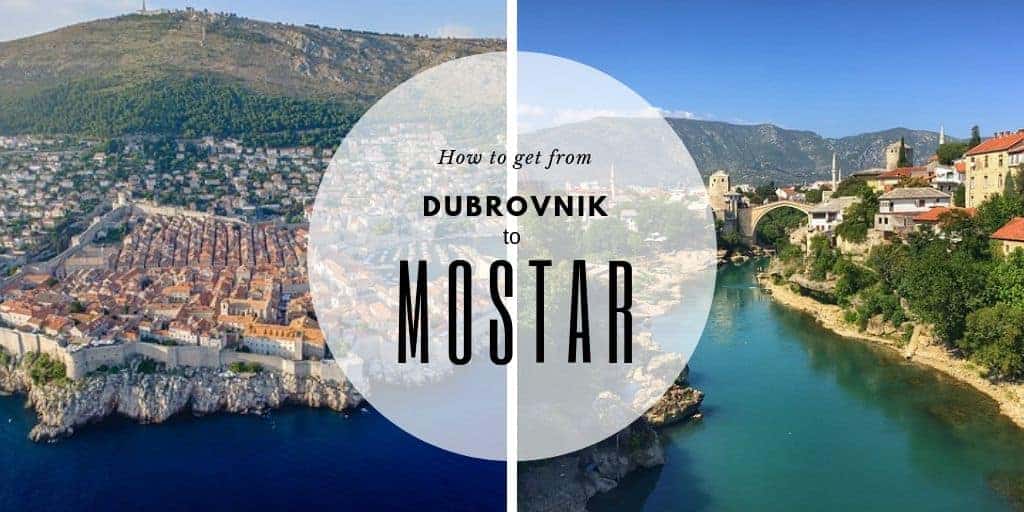 In this article, we will talk about the options available and those not available. Dubrovnik to Mostar train, bus, car and organized tour. Mostar is famous for its old town and Stari Mostar Bridge. There would not be too many people in the world who have not seen the famous bridge jumper who plunges into the blue waters below even if it is only on the TV.

Tours to Mostar from Dubrovnik

If public transport or the driving option don’t suit you an organized Mostar tour from Dubrovnik is your best bet. There are many Dubrovnik Mostar tours daily. Some of the positives of going on an organized tour can be:

Find below information and booking details for some great Dubrovnik day trips to Mostar.

From Dubrovnik: Full-Day Trip to Mostar

After departure from Dubrovnik, you will take a short break on the Dubrovnik bridge for some scenic photography of the town. Continue along the Adriatic coast while learning about the various sites that you encounter along your route.

In Pocitelj you will have an opportunity for sightseeing and free time. Pocitelj is a beautiful cultural and historical site featuring structures from the 15th century.

Continuing to Medjugorje you will have more time for sightseeing and discovery. Medjugorje is a spiritual and religious site and is one of the most famous pilgrim destinations in the Catholic world.

Then proceed to Mostar where you have the chance to visit the Mosque of Mostar, a Turkish house, and many other monuments in the town.


The driver and the guide were awesome. So many patience. The guide was very knowledgeable on the history and places to see once we arrived in Mostar.

Restaurant Europe in the Mostar old town is a great choice to eat while visiting. We ordered the Bosnian Meat platter that comes with all sorts of meats and the local delicacy called Cevapi.

This tour starts with departure from Dubrovnik, your first stop in the old Turkish town of Počitelj. Now onto the main attraction of the tour, Mostar. This town is famous for its historic UNESCO-protected Old Bridge (Stari Most) over the Neretva River.

During your 3-hour visit in Mostar, you will enjoy a walking tour of the old city and have free time to relax and explore on your own. After taking time to discover Mostar and sip some traditional Turkish coffee, you will head to Kravice Waterfalls on the Trebižat River, where you can enjoy a refreshing swim in its waters before heading back to Dubrovnik.


Our tour guide was very knowledgeable and helpful. The Kravice Waterfalls were amazing – you could hear them well before you saw them owing to it being early May and still lots of snow melt – the river was flooded as a result – and the overall impact was stunning. Mostar was most enjoyable and the view from the top of the 16th-century minaret is well worth the €6.

Dubrovnik has many great accommodation options from the seaside to the UNESCO Dubrovnik Old Town. From backpacker to the apartment and 5-star accommodation. Check out the map below for hotels booking and prices

Luxury Mostar Tour from Dubrovnik with Lunch in Ston

Visit the Old Town for the true experience of this amazing city. One of the most famous bridges in Mostar is the Old Bridge. It is protected by the UNESCO World Cultural Heritage List. Go shopping on the Old Bazar Kujundziluk, the famous street in Mostar.

On the way to Dubrovnik, you stop at Ston, a small coastal town best known for its salt and oysters. Ston has the longest city walls in Europe. Visit the famous salt works, take a relaxing walk and after that have lunch at the local restaurant where you can and should try the best oysters in Croatia

Croatia and Bosnia are not members of the European Union. Thus they still have border controls in place. This requires you to bring your passport for entry and departure points between the 2 countries. We would not like to see your Mostar tour from Dubrovnik ruined by this oversight

How to get to Dubrovnik Mostar bus

The travel distance from Dubrovnik to Mostar is about 140 km, which equals a travelling time by bus of roughly 3 hours. The route follows the Adriatic coast to Opuzen from where it continues via Metkovic to Mostar.

From Dubrovnik, there are a few daily buses to Mostar during winter time and several daily buses during summer time. At the time of writing (May) there were 10 daily buses travelling between Dubrovnik and Mostar. Make sure to get a seat at the left side of the bus so you can enjoy the view as you travel along the coast.

Prices seem to range between 14 and 16 euros for the trip.


Headed to the Koski Mehmed Pasha Mosque near the old town. For a few dollars, they will let you get the best views in town of the Mostar Bridge along the Neretva River

Driving to Mostar from Dubrovnik

Google maps show a driving time of around 2 hours and 15 minutes to reach Mostar from Dubrovnik. The time it takes will depend a lot on the border crossings out of Croatia and into Bosnia. In the summer months the wait can be up to an hour I am told.

The drive is nice and scenic with coastal views, rivers, towns and valleys along the way. the scenery in the Balkans really is beautiful and rewarding for those that take the time to visit.

Make sure you have maps me installed on your phone or bring a GPS device with you for the journey. Sometimes the roads and signs in Bosnia are not so straight forward. Driving your own car or hiring a car allows you the most flexibility on this trip

Make sure you ask the car rental company about taking the car into Bosnia. In the past you were required to have a cross border card. These days that is no longer required. Some unscrupulous rental car companies will still tray and charge you for this. It is not required.

There are no direct train routes from Dubrovnik and Mostar. The nearest train runs from Caplijina in Bosnia. You would need to take a 2-hour bus ride to get there before departing by train. A Dubrovnik to Mostar train is not a viable option.

A day trip to Mostar really is worth the time and money taken to experience it. Dubrovnik is a great base for exploring the coast of the Adriatic. We hope this article has given you the information you need to make your Dubrovnik day trip a sucess.

Dubrovnik is the 10th biggest city in Croatia.

Dubrovnik Airport is serviced by some of the top Airlines such as Lufthansa, British Airways, Austrian Airways and Air Serbia just to name a few. We recommend MOMONDO for your flight searches.

The bus from Dubrovnik airport stops at Pile Gate in front of Old Town Dubrovnik, then continues to Main Bus Station in Gruž Port.

Book a bus to Dubrovnik from domestic and international locations

Rent a car on arrival at Dubrovnik Airport with Auto Europe

All the areas of Dubrovnik are conveniently linked by buses that run according to the timetable, anywhere from every 10 minutes to every half hour. Many buses begin running at about 5.00 in the morning and pick up their last passengers after midnight.

Where to stay in Dubrovnik

Dubrovnik has accommodation options for every budget from hostels, to apartments and hotels rooms

You can search for Airbnb for there Prague offerings. If you have never used Airbnb before get yourself $50 credit by signing and booking a stay right HERE

Hotels in Dubrovnik generally start from around $88.00 a night for a double room 3star and increase incrementally as the luxury rating rises towards the 5-star average price of $133.00.

You can compare and book your stay on Agoda and Booking.com

14 thoughts on “How to get from Dubrovnik to Mostar”