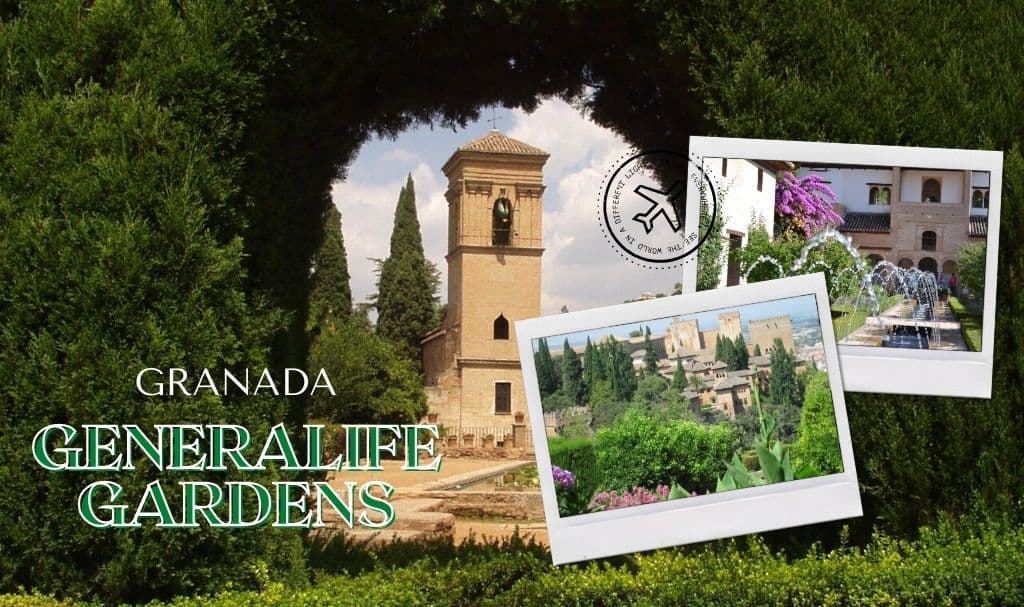 Before visiting the Alhambra in Granada, Spain I did not know too much about it. I was aware that it was a must-see destination in Granada and I roughly knew that it was a Moorish Castle.

That had some sort of ties to the famous English Queen Katherine of Aragon. What I did not know was the Alhambra Gardens were amazing in their own right and that I would be completely blown away by its beauty.

What you see today though at the Generalife Gardens Spain may be nothing that was seen during the 13th Century when they were created. It’s not known how original these Alhambra gardens are, there no plans or drawing left. What is known is that after the Moorish Kings were displaced there were many alterations done by the Christians.

No one quite knows for sure what the title Generalife means. Many have loosely translated Generalife to mean the Governor’s Garden or the Architect’s (Alarife) Garden. Unfortunately, people miss the Generalife Gardens as they are more interested in just visiting the Alhambra and in our opinion, this would be a huge mistake.

Make sure you book your Generalife Alhambra Gardens tickets online

The view as you walk into the Generalife Granada Gardens is eye-catching, to say the least. You are torn whether to look right or left. If you look right you see the amazing manicured gardens that seem to continue to rise on various levels.

If you look to the left you look out over the Alhambra and the Granada Township, white houses with tiled roofs and onto the distant mountains.

And then there is the beautiful citrus smell that follows you everywhere you go. It is not an overpowering smell but one that just seems to sit on the air.

It just gave it another amazing aspect how well the gardens were an important part of life outside of the city. With the roses spotted all over the gardens, they must have made it smell heavenly when they are all in bloom.

Stairway at Generalife Granada Gardens was my Favourite!

One of our favourite parts of the Alhambra and Generalife gardens was The Water Stairway. The Water Stairway is three levels of stairs with a pond in the middle of each section and water flowing down the side of the Stairways via channels. The Stairway is totally encased by overgrowing foliage. It was a beautiful part of the Gardens that leads to some of the highest points of the Generalife Sapin Gardens.

The Court of the main Canel is a beautiful enclosed building with a canal the middle and fountain jets that cross each other. As beautiful as it maybe it is now a long way for what it originally looked thanks to a fire in the early 19th century and alterations made by the Christian Monarchs.

The Generalife Gardens and the Nasrid Place are truly amazing

At the top of the Water Stairway, you will reach the highest point in the Generalife Gardens. Here you will find The Romantic Observation Point. A relatively new addition to the Generalife Granada Gardens built in 1836 and it is called The Tower. It generally differs from the rest of the architecture of the Generalife but the views from the top are stunning.

There are stairs, fountains and hedges which make for a great adventure. Our kids were very interested in the Kings and Queens who lived in The Alhambra and relaxed in the Generalife Gardens..

Make sure you book tickets to the Alhambra and Generalife gardens

Family Travel Tip: Book your tickets online well in advance as they sell out quickly. Tickets can be booked on Ticketmaster Spain and Get Your Guide.

Book your entry to the Nasari Palace for around lunchtime that way you have a few hours prior to exploring the Generalife Gardens. Get a taxi to the Alhambra it’s just as cheap as the bus.  You can then stroll down the hill back into town.

Also, take some snacks for the kids. Waiting in line was where ours decided that they were really hungry. There is a cafeteria in the grounds of the Alhambra but it seemed very busy.

The Gardens of the Generalife Granada are, not to be missed. There are many things to do in Granada but make sure the Gardens are on your list. It’s a great choice for adults and kids in Granada. Along with the Alhambra, the Generalife is the top Granada attraction to see on your visit.

Where to stay in Granada

The Granada Old Town area is a nice place to stay it’s close to the Alhambra, Granada Cathedral and the Albaicin. Granada accommodation comes in shapes and sizes. Hotels, hostels and apartments for singles couples and families. You can browse the apartment Granada listings below

We hope this article from us here at Wyld Family Travel has you inspired to visit the Alhambra and Generalife gardens and stay in Granada. There are so many things to do in and see in Granada Spain. For more amazing ideas on where to holiday in Spain click through to our Spain Destination Guide page for more brilliant inspiration.

13 thoughts on “The Alhambra Gardens – The Generalife”