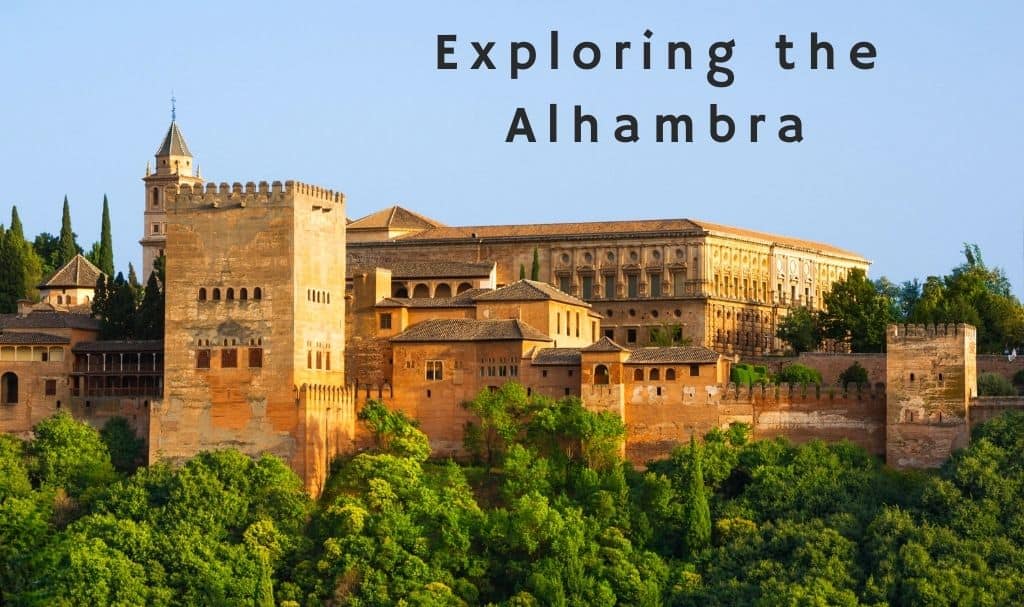 As I read a book about Queen Katherine of Aragon and listened to her describe the Alhambra my imagination went crazy. I pictured an amazing Moorish Castle that was just so brilliant that words could never do it justice.

For years it sat in the back of my mind and I didn’t think much more about it until we decided to spend some time in Granada, Spain on our last trip. It was the number one place on my list to visit once the dates were confirmed.

I went back to that story and I had pictures in my mind of what I thought it would look like but there was no way I would ever be able to picture its magnificence…even with an imagination like mine!

The Alhambra, Granada is a Moorish Castle dating back to around 889 AD where it was originally a Roman Fortification. After the construction was finished by the Romans is was basically left to fall apart and became a ruin.

In the 13th Century, it was found by Moorish emir Mohammed ben Al-Ahmar of the Emirate of Granada. He is the one who is responsible for its current palace and walls but it was Yusuf I, Sultan of Granada who made it into a Royal Palace in around 1333.

Have you been to a Moorish Castle?

We had purchased our Alhambra Palace tickets while we were still in Australia and they seemed to be burning a hole in our pockets. We were just so keen to get there. We could see the Moorish Castle high on the hill taunting us as we wandered the streets of Granada but it was not until our 2nd full day that we got to go up there.

We walked down to the square at the end of Gran Via and we decided to catch a taxi up to the Alhambra Entrance rather than take the walk (neither of the girls was really interested in walking up there) The trip cost us a little over 5 Euro and it was well worth it. The winding streets made for a bit of a hairy ride at times!

As soon as the gentleman manning the Alhambra Entrance waved us forward you could not stop the four of us from racing towards him. We were there in plenty of time for our Nasrid Palace entry time so we took off to see the Generalife Gardens.

I was stunned at their beauty. The Generalife Gardens were so beautiful with their orange trees everywhere. They were flowering at the time so the smell from the blossoms followed you everywhere.

The views over Granada and the Moorish castle were amazing and you could just stand and admire them forever. All of the little buildings scattered throughout gave the girls somewhere to rest and have a sit-down. They also helped them with a few games of hide and seek especially the high hedged garden!

I could see the Moorish Castle from the Generalife gardens and I desperately wanted to get there. As we got closer and closer I was more and more excited to see it. But like all amazing places, we had to wait in line for our entry time!

The wait in line was not that long and before we knew it we were inside and I can tell you I had no words for such a long time as we wandered. Through the first set of ornate doors, you go and it just gets better and better.

At first, you got through a set of rooms that are beautiful but not like any you have seen. They are so ornately decorated and the tiles are still so bright. They were smallish rooms that looked over the town of Granada through some of the most elaborate windows I have ever seen.

None of them had glass and it was all open to the slight breeze that was coming through them. It was also carrying that orange blossoms smell as well.

From there we went out into the courtyard called the Court of the Myrtles and again I was blown away by its beauty. The tiles that lined the walls and the water features in the middle where like a Castle or Palace I had never seen. There was so much colour, beautifully carved arches and sunlight everywhere.

As you wander from area to area the water features follow you. There were a couple of times that people would accidentally stand in the aqueducts that ran all over the Moorish Castle. They carried fresh water from room to room and also helped keep it cool.

They would then finish at a large water feature before running off again. This was all too much for Marley who whenever she got the change stuck her fingers in the water! I am actually surprised she stayed as dry as she did.

The thing that struck us the most about the Alhambra is how you could go from beautifully decorated rooms like the Harem and the Hall of the Two Sisters and then straight out into a grand courtyard like the Patio of the Lions. It made the Moorish Castle seem so much bigger than it was and it gave it so much light as well. Arches separated the room and courtyards with the most beautiful detail on them. Every single one was so unique and it took a lot of time to get through the rooms just trying to see all of the fine details.

We made our way out of the Moorish Castle and out into the Daraxa’s Garden. The smell of the orange blossoms was again the one thing that I noticed straight away…for the girls it was the cats that seemed to be al around the garden!

We stayed there for a little while, while the girls played with the cats and had a drink (I asked a nearby guard if it would be alright if they had a drink) and then we wandered the gardens in there. It was also where we caught up on the audio guides that we seemed to have forgotten to listen to while we were walking as it was all just so much to take in!

I can’t recommend you visit Granada and the Alhambra enough. This amazing Moorish Castle will blow you away with its sheer beauty and the history that was made here.

How to get Granada Spain

We hope this article from us here at Wyld Family Travel has you inspired to take a trip to Granada. There is so many great things to see and do in Spain For more amazing ideas on where to holiday in Spain click through to our Spain Destination Page for more brilliant inspiration.

More travel inspiration for your trip to Granada

7 thoughts on “Exploring the Alhambra in Granada”