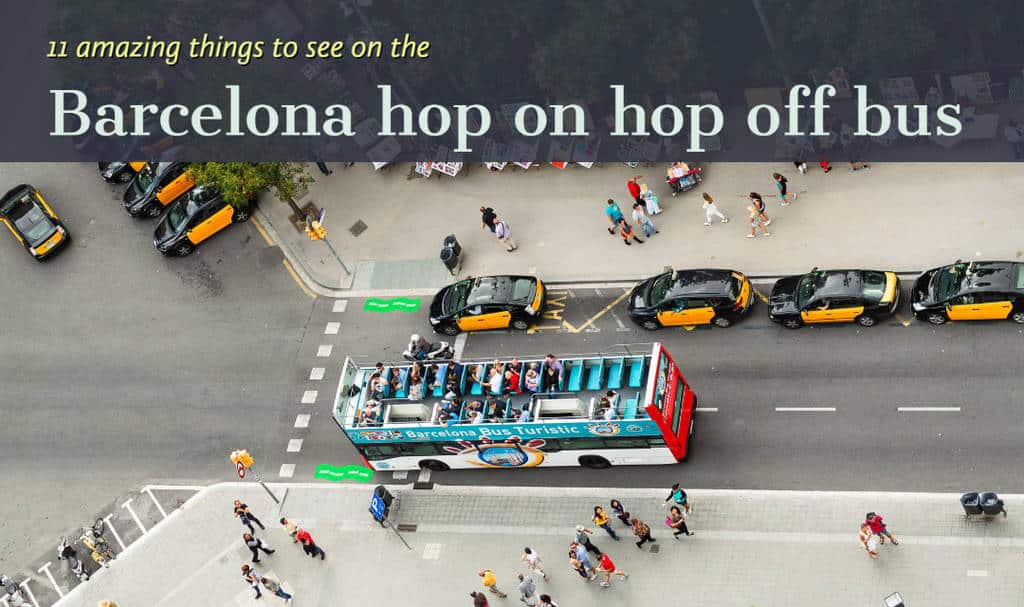 Barcelona is the capital of the Catalunya region and the most visited city in Spain. Barcelona is built sitting between the Mediterranean sea and the mountains. Barcelona is a big city with many attractions to visit. The easiest way to see the best things in Barcelona is by bus.

The city sightseeing, Barcelona hop on hop off bus is an amazing way to see the city. Hop on hop off Barcelona bus tickets can be purchased when boarding the bus or online.

You can buy your ticket on board or online at any of the 44 stops along the way. You will receive a Barcelona Tourist Map, and a set of headphones to listen to a multilingual commentary. The bus tour will suit families visiting Barcelona

The Barcelona tourist map will help you plan the best stops for the day while the headphones inform you off the sights and history. You can’t miss the Barcelona city tour bus as they are red in colour.

You may even see some things to do in Barcelona at night during your bus tour.  The hop on hop off Barcelona bus gives you the choice of 3 great routes, the East/Green Route and West/Orange Route. These two routes cover the main highlights of the city.

The Hop on hop off bus is much easier than using the notorious Barcelona subway which is known for its pickpockets. The best place to catch the hop on hop off city sightseeing bus is at Plaza Catalunya.

Highlights of the Barcelona hop on hop off bus.

Barcelonetta is an amazing area that was reshaped for the 1992 Barcelona Olympics. No visit to Barcelona is complete without a visit to the Barcelona beach. The beach area of Barcelonetta is characterised by the bay like swimming areas that have been developed and kilometres of white sand.

A wide boulevard for walking and bike riding allows you to stroll along the Mediterranean Coast enjoying the Barcelona sunshine. For many, the sun and beach are big Barcelona attractions. The Barcelona sightseeing bus even stops at the beach for you.

This stop on the Barcelona sightseeing bus is located at the port end of the famous La Rambla. La Rambla Barcelona is the main tourist thorofare running starting at Plaza Cataluyna. From here you will see the statue of Christopher Columbus with him pointing to the new world.

Spain and Columbus were instrumental in discovering new world lands (for those touring Spain, Seville Cathedral contains the Columbus Tomb). This stop allows you access to the port where you can take a cruise and see the sights of Barcelona from the water.

The star of the show is a 60-metres-long royal galley Admirals of Juan de Austria. This ship was involved in the Battle of Lepanto on 7 October 1571, in which the Turkish Armada was defeated in a victorious day for the Spanish.

Another area at the Port of Barcelona. From here you will get a good view of the Barcelona Cable car as it glides across the skies of Barcelona. You can’t board the Barcelona cable car from here but we will let you know later when we reach that stop. This hop on hop off Barcelona stop gives you access to the Port Vell shopping centre and the world-famous

Eulalia was a young virgin who, according to Catholic tradition, suffered martyrdom during Roman times in the city.  A legend says the Romans stripped Eulalia naked in the public square.  A sort of miracle happened when the snow started falling in mid-spring covered her nudity. This miracle completely enraged the Romans. The Romans put the poor girl into a barrel with knives stuck into it and rolled it down a street.

This hop on hop off Barcelona stop is the starting and ending point for the two tours of the city. Plaça Catalunya marks the start/end of La Rambla. This is one of the focal points of the city. At this stop, you will find street artists working in the square. Kids in Barcelona will love to feed the pigeons that land here. Stalls around the square sell bags of bird food.

Being by the sea fresh seafood is on the menu at many places throughout Barcelona. One of the favourite dishes is seafood Paella. To find one of the best Paella’s in Barcelona head to O’Toxo Tres Hermanos. It is located a few hundred meters off La Rambla. O’Toxo is a traditional Barcelona restaurant

and it is where you will find, without a doubt, some of the best Tapas and Paella in the city. We can recommend this restaurant as we ate here 4 times when visiting Barcelona. The seafood and chicken/seafood paella is a must. Do not buy the Paella on La Rambla you will only get the mass-produced version that comes frozen in a box. O’Toxo offers the real deal cooked from scratch while you wait. Nothing better than some cod cake tapas and paella washed down by some Sangria!

Home to the mighty Barcelona Football Club. Barcelona FC is worshipped worldwide by millions of fans who flock yearly to Camp Nou. The Camp Nou offers fan experiences with access to the ground, museum and gift shop. There are many different tour option at Barcelona FC Museum that includes an area dedicated to one of the worlds best football players Leo Messi.

The trophy’s from La Liga and the European Championships are in full view. You can sit in the stands, view the ground from many different angles. If you are a full-on tragic and full of Euros you can walk on the hallowed turf of the Camp Nou. You can see the players dressing rooms and lockers. This is one of the great Barcelona attractions for kids and adults alike.

The 1992 Olympic stadium is on many people’s Barcelona tourist map. Sitting high up on the hill above the downtown region is the Olympic precinct.  I can remember images of divers with the city as their backdrop. These sorts of images supercharged Barcelona into the tourist mega you see today.

You can explore the Olympic area of Barcelona, you can visit the Olympic Stadium or you can just sit in the stands.  For many sports fans visiting Olympic Stadiums are amazing attractions and pieces of sporting history. You can book a tour of the Estadi Olímpic Lluís Company and learn about its history from construction in 1927 to the Olympics and beyond.

This stop on the hop on hop off Barcelona route gives you access to the amazing garden terraces of Jardins de Miramar. It’s a great place to sit and relax. It allows you to get away and have a rest from the hustle and bustle of the Barcelona attractions.

There is a great photo opportunity spot here. You can get the city in the background from this point. It’s well worth getting off just for the picture. The before mentioned Port Cable Car Barcelona/Port Vell aerial tramway has one of its 2 stations located at this stop.

The Cable Car Barcelona can be boarded here as it glides across the harbour until it reaches the Barcelona beach station. The trip takes around 10 minutes and provides you with amazing views of the city. Alternatively, the Montjuic cable car takes you to the top of Montjuic.

The Montjuic Castle awaits a visit from you. The Montjuïc Castle is an old military fortress, with roots dating back to 1640. It is built on top of Montjuïc Hill in Barcelona as a strategic position to see enemies arriving from the ocean. Tickets for both the Montjuic cable car and the Cable car Barcelona can be purchased onsite.

The Barcelona hop on hop off bus tour would not be complete unless it paid homage to Barcelona’s favourite architect. The bus stops at 3 of the most famous Gaudi sights.  Antoni Gaudi is the best-known architect of Catalan Modernism.

His masterpiece, the still-incomplete Sagrada Família, is the most-visited monument in Spain. Between 1984 and 2005, seven of his works were declared World Heritage Sites by UNESCO. All the best Barcelona sightseeing tours have Gaudi at the forefront of your Barcelona visit.

We hope this inspires you to jump on the hop on hop off Barcelona touristic bus. It really is the best way of sightseeing in Barcelona. Just lookout for the red bus tour Barcelona

Barcelona hop on hop off price

The Hop On Hop Off Bus offers two different ticket options. You can buy a 1 day or a 2-day ticket for the bus. both of these tickets let you hop on and hop off the bus as many times as you want during the operation hours, of 9:00 am to 7:00 pm in the winter and 8:00 pm in the summer.

Barcelona hop on hop off price for Adults is €29,00 for one day and €39,00 for two days. If you purchase the bus tickets online you´ll receive a discount for your tour.

Barcelona El-Prat is a hub for Vueling and Level airlines

Barcelona is a focus city for Air Europa, Iberia, EasyJet, Norwegian and Ryanair

Barcelona is served by a comprehensive local public transport network that includes a metro, tram and bus network

Buses in Barcelona are a major form of public transport, with extensive local, interurban and night bus networks

Barcelona has accommodation options for every budget from Hostels, to apartments and hotels rooms.

Hostels in Barcelona can start from as little as 15€ Euro a night for a shared dorm room.

Based on our fellow traveller’s reports, Travelodge Barcelona Poblenou is a popular 1-star hotel for budget travellers. it features free WiFi and a restaurant. Other options for your Barcelona trip on a budget include Centre Esplai Hostel and Hotel Barbara.

For families visiting Barcelona, we recommend The Bicycle Apartments is a top 4-star apartment featuring in-room kitchens and laundry facilities. Other options for your family trip include Novotel Barcelona Cornella and Hotel Constanza.

The is a big market for luxury travel in Barcelona. The Eurostars Grand Marina is a 5-star hotel with a restaurant and a poolside bar. Hotel Arts Barcelona and El Palace are two other upscale options for your holiday.

Hotels in Barcelona generally start from around $220.00 night for a double room 3star and increase incrementally as the luxury rating rises towards the 5-star average price of $408.00You can compare and book your stay on Agoda, Hotels.com, and Priceline

We hope this article from us here at Wyld Family Travel has you inspired to visit Barcelona in Spain . There are so many things to do in and see in Spain. For more amazing ideas on where to holiday in Spain click through to our Spain Destination Guide page for more brilliant inspiration.

More travel inspiration for your trip to Spain