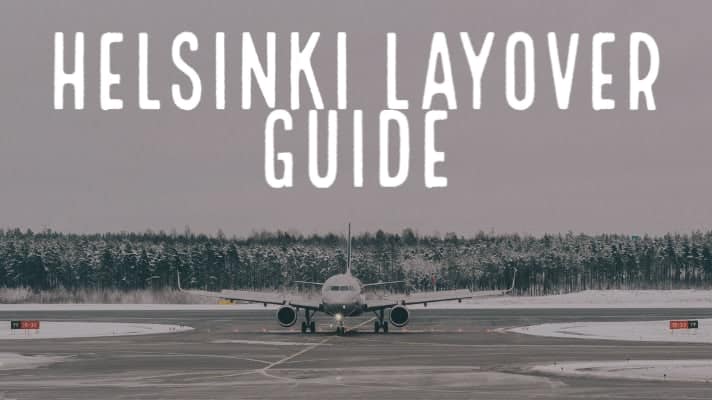 Helsinki Airport is the home destination for Finnair flights. Finnair flies from Asia, The Americas and beyond to Europe via Helsinki Airport. You may have a Helsinki airport layover that ranges from a few hours to half a day. A Helsinki layover means you can either spend your time in the airport or you can head from Helsinki Airport to the city centre. This option allows you to see some Helsinki attractions on your Finnair stopover

Use your Helsinki Stopover to explore the city

With a 9-hour stopover, we decided to head into the city for a Helsinki layover from the airport. A few hours spent in the city just to offset the time spent sitting at the airport. Having flown through the capital of Finland before I can also tell you it is expensive. Prices for food and drinks at the airport are high, money better spent seeing some of Helsinki’s attractions.

A direct train service opened between Helsinki airport to city central station in July 2015. This makes a Helsinki stopover so much easier for people to get into the city. You will arrive in the city at Helsinki Central Railway Station is otherwise known as  Helsingfors Central Station.

Trains are frequent on the line and trains run every 10 minutes in the daytime. All trains are modern and low-floor, providing easy access with luggage, prams or wheelchairs. This is a great feature of the trains as luggage can be a problem getting it on and off of trains.

One day in Helsinki

When you arrive on at Helsinki Central Station you are only a few hundred meters away from the Esplanade area of Town. Esplanade is a boulevard that runs from the city to the harbour area of Helsinki. Have you been to Paris?  Esplanade reminds me of  Boulevard de Rochechouart in Montmartre.

The middle of the Esplanade is a pedestrian zone. The zone has bars and ice cream stands, buskers and more taking in the streetscapes of Helsinki.  Beautiful tree’s, grass and chairs, a great place to relax on a warm Finnish summer day and for us was one of the best things to do in Helsinki.

Another of the best things to do in Helsinki is going for a walk down the sidewalk browsing the shops that line the street. One of the most famous is The Stockman department store. This store occupies a whole block in central Helsinki.  Stockman is an iconic department store in the northern Baltic/Scandinavian regions of Europe with outlets in Estonia, Latvia, and Russia. Shopping in Helsinki at stockman can be quite the exoerience.

At the bottom of the Esplanade is the Market Square and harbour area. Most days you will find a market operating selling local crafts and souvenirs, take away food, fruits, and vegetables. Kids will love the stuffed toys especially the husky dogs that were on sale and traditional wooden crafts. You will find some of the best food in Helsinki, reindeer and fish on lots of the menu’s on the market, The food is good priced meals and great quality food. I always say when near the sea eat the seafood. Market Square os easily one of the best things to do in Helsinki

If your going to eat food in Helsinki this is the place to have it. We can recommend a plate of Calamari and seasonal vegetables which were fantastic. If you have more time on your Helsinki layover you may want to go and seek out some of the finer foods Helsinki has to offer! A new addition to the harbour square landscape is the SkyWheel Helsinki. The Helsinki SkyWheel is 40-meter and provides a 360° view of  what to see in Helsinki city and the islands in Helsinki Harbour

The seafood is a must try on a Helsinki layover

Helsinki, like most other cities these days has its own giant Ferris wheel at the harbour. We did not go on it but it would provide excellent views of the harbour and islands that lie just kilometres off Helsinki including the UNESCO listed Suomenlinna which we visited in 2013.

If you like a beer the award-winning Bryggeri Brewery is located nearby. The brewery features a regular line of beers plus seasonal brews. The brewery has a beer garden with the fine-dining restaurant showcasing local Finnish produce and a bar that serves their beers and snack food. It would be a great way to spend some time on your Helskini layover.

Just up the street from Bryggeri Brewery you will find Helsinki Senate Square a huge building that dominates the area in its brilliant white colours. Senate Square and its surroundings are located in the oldest part of central Helsinki. The steps seem to be the place to be on a warm day with people sitting on them enjoying the sun. It looks like one of the most fun things to do in Helsinki.

Popular landmarks and famous buildings of the Finnish capital all surround the square. These include Helsinki Cathedral, the Government Palace and the main building of the University of Helsinki. Senate Square usually has some exhibition or activity to see from art to sporting events to music.

Enjoy a Helsinki City Tour if you have the time

Alternatively like all major cities, there is the Helsinki hop on hop off bus.This type of tour is amazing for giving you an overview of the Helsinki city area. Helsinki hop on hop off bus tour easily whisks you around the sites in a few hours or longer if needed. It is a great way to see as much as you possibly can on your Helsinki stopover. If you have long enough you can get out see the sights you like then get back on the bus.

The Helsinki Airport Train will take you back to your plane

Head back to the Helsinki central station and the airport from here. The Helsinki train station will be about 200 meters away. This will have filled in at least 4 hours on this Helsinki layover. You could fill in a few hours more depending on the time you have between flights at Helsinki-Vantaa airport. Take some time to check out the front of Helsingfors Central Station Helsinki. The Helsinki Central Railway Station has two large sculptures out the front which makes this train station famous in its own right. Jump back on the Helsinki Airport Train and you day in helsini is done

Helsinki is the queen of the north, It is a progressive and liberal city to visit. with something to see for everyone. Grab a Helsinki Guide and see this city on a stopover or stay over.

Things to do at Helsinki Airport

If you decide to stay at Helsinki Vaanta Airport you will find shops, food and beverage options.

If you arrive in Helsinki and you are just so tired there is the Glo Hotel in terminal 2 that hires rooms by the hours and days. You can unwind have a shower and a sleep and be ready for your onwards flightglo hotel Helsinki.

For aviation lovers Vaanta airport has a number of things to interest you. You can do a tour of the airport or the aviation museum. The Helsinki Airport aviation museumIt is a 20-25-minute walk from the terminal or catch a can for around 7 euros. You can find viewing decks for plane spotting and photography

Helsinki Airport terminal has a number of shops to keep you busy. You will find the usual electronics, luggage, food stores plus global brands such as Bvlgari, Burberry and Mont Blanc

How to get to Helsinki

Where to stay in Helsinki

We hope this article from us here at Wyld Family Travel has you inspired to visit Helsinki on a layover. There are so many things to do in Helsinki that will have you entertained for you entertained on a stopover. For more amazing ideas on where to holiday in Finland click through to our Finland Destination Guide page for more brilliant inspiration. 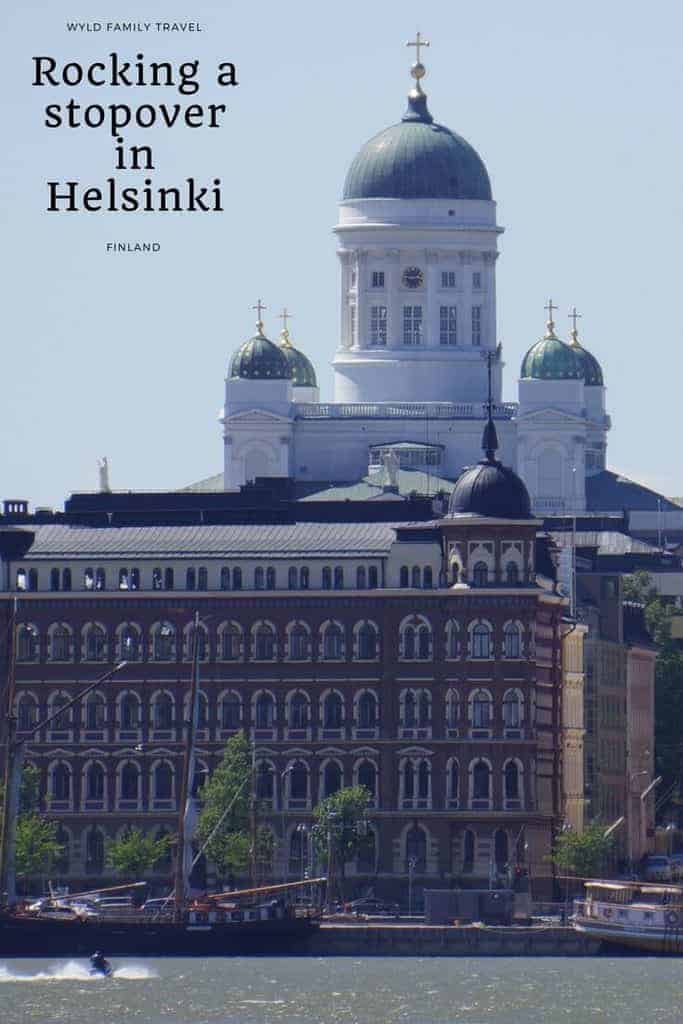 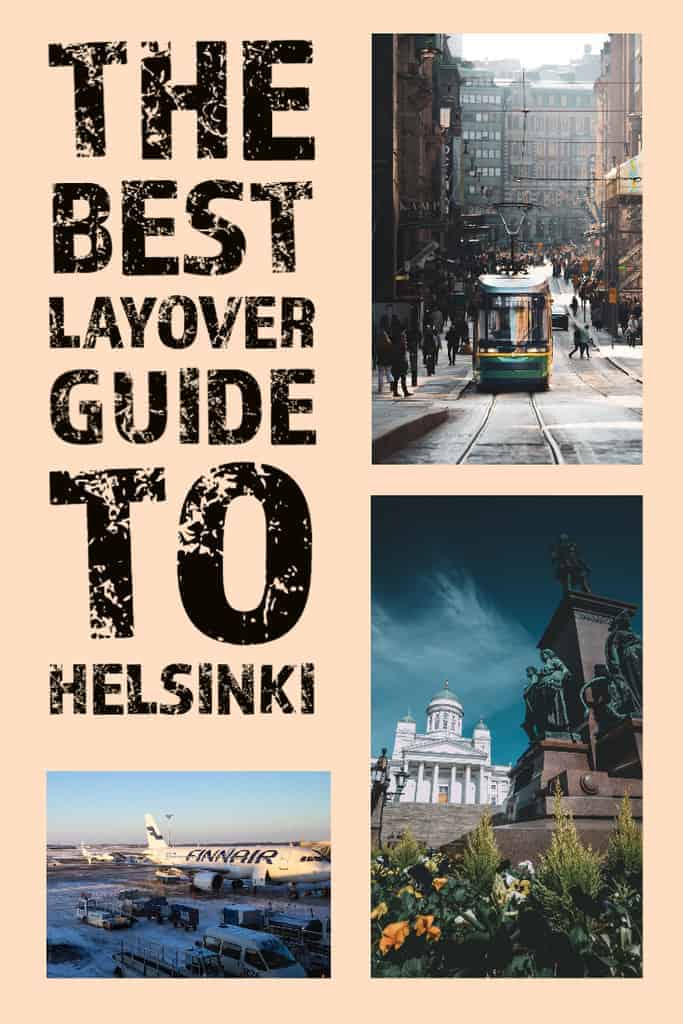 18 thoughts on “How to do a Helsinki Layover”