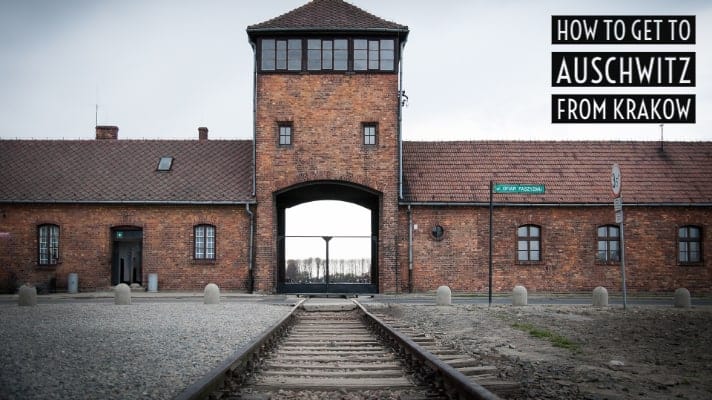 Kraków is the second-largest and one of the oldest cities in Poland and was the home to the Kings and Queens of Poland past. Wawel Cathedral and the Royal Castle, St. Mary’s Basilica, and the largest medieval market square in Europe are all worth seeing.

But located just outside of this beautiful city is one of the most recognised and feared names in WWII. The Auschwitz-Birkenau Concentration Camp.

Auschwitz – Birkenau is a destination that will rock you to the core. So much history, sadness and crazy ideology all converge in this one location. In 1940, on the outskirts of Oswiecim Poland, a prison camp was established. The continued mass detainment of the Jews, political prisoners and the Polish people meant that a bigger solution was required.

On June 14, 1940, the first prisoners arrived. By 1942 Auschwitz had turned from a prison camp into a death camp, a systemic killing machine controlled by the Third Reich. For over a million people the Auschwitz arrivals platform was the end of the line for them, as they were marched straight to the gas chamber.

Visiting Auschwitz is a must for all people

Today trips to Auschwitz come in two parts. First to Auschwitz (or Auschwitz 1 as it was called). This is where the entrance is under the famous gates with the sign above that says Arbeit Macht Frei.

Auschwitz 1 is where the first prisoners were held and the majority of the buildings are still intact for you to tour through. It is home to the infamous block 11 where the Nazi’s carried out all types of heinous inhumane experiments on the inmates.

Outside Cellblock 11 is the shooting wall where those being held were marched outside and shot in the back of the head. It is here that the Nazis first tested Zyklon B on small batches of prisoners before expanding the gas chambers to an industrial level.

It is here with an overload of information through words and images that you fully realise the horror of this place. To this day I still remember thinking ‘this is the saddest place I have ever been’ as I walked around with tears rolling down my cheeks.

To get to the Birkenau extermination camp (or Auschwitz 2 as it called) requires you to catch a bus a short distance. You can catch a shuttle bus outside Auschwitz 1 to take people across to the bus stop at Auschwitz 2. The distance between the Auschwitz camp and the Birkenau camp is 3.5 kilometres

Birkenau is where the killing happened on an industrial scale. This is where the Auschwitz gas chambers were erected, this is where over a million people were put to death. Birkenau was the largest prisoner camp in the Third Reich.

There were over 300 barracks on-site to house the inmates and at times over 100,000 people lived in them.  Birkenau was 200 hectares in size and today contains the destroyed ruins of the Auschwitz gas chambers and crematorium.

There are a few original and reconstructed barracks for you to look through. These give you a feel of what the prisoner’s accommodation was like. It is amazing how many people they could squeeze into such small areas.

You can walk the length of the train platform where people from all over Europe arrived on a one-way ticket.  What struck us about Birkenau was how peaceful it felt. It had wide-open spaces and luscious green grass, that masks the fact that you are walking where the ashes of a million people lie.

Visiting Auschwitz Poland is as confronting as a punch in the face. It shows what one crazy ideology can do. Its lessons are still relevant today when we see what is happening in the world. A world where dictators are still persecuting people, where citizens are not safe because of race and religion.

The lessons have not been learnt.  Auschwitz is a great reminder that power needs to be checked, that all governments need to be accountable and that human life is precious.

Let’s talk about how to get to Auschwitz from Krakow

The AUSCHWITZ-BIRKENAU STATE MUSEUM is located in the old world city of Oswiecim, about 66 kilometres west of Krakow. The entry at the “Arbeit Macht Frei” gate is located about 2,5 kilometres from the city centre of Oswiecim. Krakow is the nearest major airport to Auschwitz. This means you will still need to find a transport option to Krakow.  Let’s explore the different options for getting to Auschwitz from Krakow.

Being family travellers when we visited Auschwitz Poland our kids were 5 & 8 years old. At that age, we felt they were far too young to be exposed to this kind of Museum. I would suggest your children should be at least 10 years old minimum and have had some sort of education about what went on at Auschwitz Birkenau before taking them.

Below we handpicked and researched three amazing Auschwitz Krakow tours for you to choose from. Book one of these Auschwitz trips today. Let the tour be your best way to visit Auschwitz.

Visit the Auschwitz Museum, site of the largest Third Reich concentration camp. Learn how the complex functioned and see the barracks where prisoners were kept.

An English-speaking driver will pick you up from a pre-arranged meeting point in Krakow and transfer you in a comfortable vehicle.

If you want a life-changing experience visit Auschwitz-Birkenau. This self-guided tour transports you to and from the site and allows you to explore at your own pace

Take a 3.5-hour guided tour of the Auschwitz-Birkenau Memorial and Museum and learn about the terrible events that took place at the largest Nazi concentration camps during the Holocaust.

How to get to Auschwitz from Krakow by train

The train from Auschwitz to Krakow trains depart Glowny station. Kraków Główny or the main station is the largest and the most centrally located railway station in Kraków. On an average day, some 660 trains run on their 12 tracks. The station is located on the edge of the world-famous Krakow Old town.

We priced a ticket departing Krakow Glowny at 8.33 am. The price was 15 zloty or about 3.50€ on the outward journey. Returning departing Oswiecim at 5.12 pm was the same price.

The cost of a Krakow Auschwitz train return day trip is 7€ return for an adult in second class. You can Check Auschwitz Birkenau Train Timetable. Krakow Glowny to Auschwitz is an easy option for a day trip.

The Auschwitz UNESCO World Heritage Site is open all year long, seven days a week, except January 1, December 25, and Easter Sunday. You can start the visit in the following hours.

The generous opening hours allow you visit Auschwitz from Krakow starting very early in the morning to make the most of your day.

How to get to Auschwitz by bus from Krakow

For those wanting to take the Krakow bus to Auschwitz, you will depart from MDA Bus Station in Krakow. The MDA Bus station is located at ul. Bosacka 18 in the centre of the city. The station has a total of 37 departure bays where passenger check-in takes place.  You can buy tickets for the Krakow to Auschwitz bus from the ticket booths or check with the driver of the bus.

Many of the bus companies drop at Auschwitz Camp but some drop of in the city of ‘Oświęcim. From here it is about 2 kilometres to the Auschwitz memorial. If you wait a local bus will come along that goes to the camp.

Guided tours options once you reach Auschwitz from Krakow

After visitors have navigated getting from Krakow to Auschwitz their are several options for guided tours. Every Guided tour includes a visited to Auschwitz I and Auschwitz II-Birkenau.

As one can imagine after getting to Auschwitz the last thing you would want is to miss out on a tour. There is always a large number of visitors to the site. Guided tours should be reserved at least two months before a planned visit.

Getting to Auschwitz from Krakow by car

For those wanting to drive to Auschwitz from Krakow, the Museum is located on the outskirts of the city of Oświęcim on national road 933. If you are looking for parking enter Stanislawy Leszcynskiej Str no 11 into your GPS. The trip to Auschwitz by car will take around 70 minutes and cover 68 kilometres on Poland’s A4 Motorway .

There is a parking lot in Auschwitz I that costs 8 zł for the whole day. Like all parking the earlier you arrive the better, especially in the busy summer months. The car park at Auschwitz 2 is 200 metres away from the gate. It is reported that it costs 2 zł per hour. You will also find free car parking in the surrounding areas that are at least a kilometre away. Taking a car is the most flexible option as it allows you to explore the museum at your own pace.

If you are considering visiting Auschwitz without a guide we recommend you book your entry by the official website at visit.auschwitz.org. Entry without a guide to the memorial site is free of charge.

Krakow to Auschwitz by Taxi

Please find below a list of Krakow Taxi companies.

As we have said a visit to Auschwitz is something everyone must do but you may not have decided before you left Krakow. there are other guided day tours available from other cities that you may want to consider.

Krakow is one of Europe’s oldest and most beautiful cities. Some of its major sights are located in the UNESCO World Heritage Old Town.

Where to stay in Krakow

We hope this has inspired you and informed you on how to get to Auschwitz from Krakow. Besides the amazing experience, you will have at Auschwitz Birkenau Concentration camp don’t forget to check out Krakow and its amazing sights.

We hope this article from us here at Wyld Family Travel has you inspired to visit Krakow and Auschwitz. There are so many things to do in Krakow and so much history to learn at Auschwitz. For more amazing ideas on where to holiday in Poland click through to our Poland Destination Guide page for more brilliant inspiration.

More travel inspiration for your trip to Poland 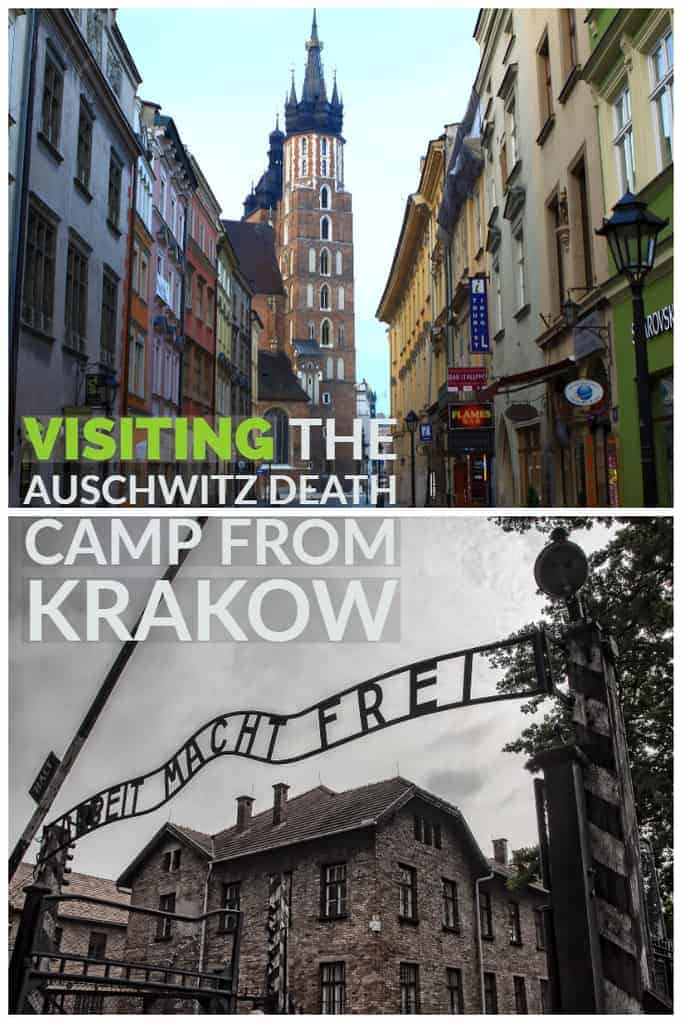 16 thoughts on “How to get to Auschwitz from Krakow”