Auschwitz – Birkenau The saddest place I have ever been. 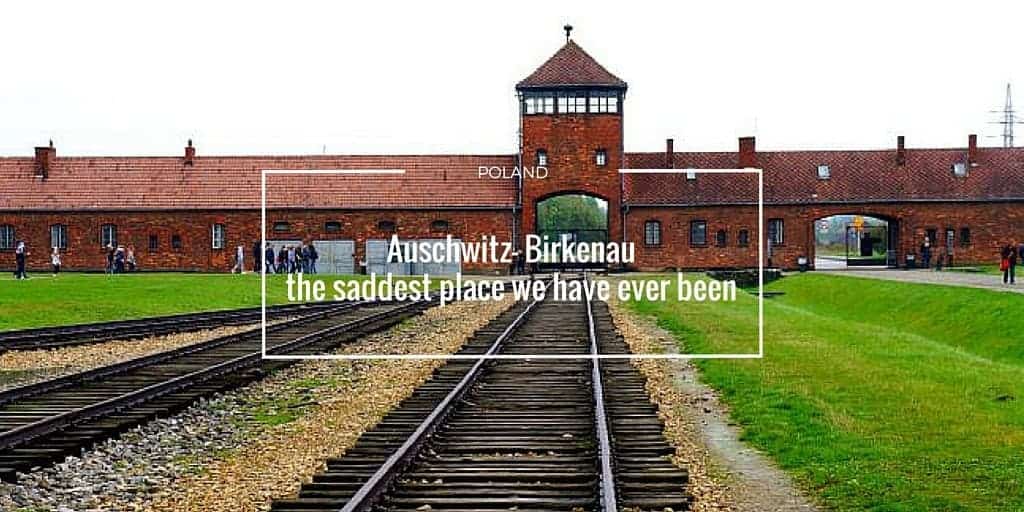 It was a place we both thought was important to see for ourselves, to see exactly what had happened there and to try to understand the horrors that had been committed. Our 2013 journey into Poland presented us with the chance to tick off this major bucket list destination ( we returned to visit again in 2019).  Auschwitz is one of those places that is forever etched into history and the actions that took place there will never be forgotten or should never be forgotten. Auschwitz  – Birkenau is a stark reminder of what one person who controls an army can do and what other humans are capable of doing to each other.

As we had visited Dachau Concentration Camp just out of Munich in 2003 we thought we were ready for an Auschwitz visit. Neither of us was prepared for the emotional roller coaster the day had in store for us. When we first arrived we bought our tickets and waited just out the front…when our time was called we went through the building into an open area to wait for our guide.

That is when you felt it. It wasn’t a bad feeling, for me, it just felt like there was something on my skin (Bec)…it just made me feel uncomfortable, a little uneasy. Maybe it was just coming to the realization that what we thought was bad was going to be a thousand times worse than we could ever have imagined.

We chose to go on a guided tour through both camps that would last around the 3-hour mark. We both felt that this would give us the best chance of trying to understand what had happened in the most respectful way we could. Having the guide with you will, the majority of the time, give you information and insights into things that you would not have known if you went there by yourself.

I am so glad we opted for the tour. I would hate to think what information we would have missed if we had of opted for the independent tour. We returned to Auschwitz in 2019 and did an inderpendant tour. Our 2013 assumption was correct, you need to do a tour to find out all the information

While waiting in an open area just across from the main gate, I had a chance to look around and I was totally stunned by what I saw. I had pictured a desolate, gloomy, barren place that was completely void of any niceness, of anything that resembled a decent place. Now we mean no disrespect at all when we say this but it was pretty. It looked like a quaint little village.

It was so green and the trees were everywhere. In the back of your mind, you thought of why it would be so green and you knew the answer. The red brick barracks looked so strong and neat. It completely blindsided me how I felt seeing it and knowing what happened there, how could it look so nice with all the horror and atrocities it had seen? If you took away the barbed wire and guardhouses it could have been ‘picture perfect’. It was peaceful, quiet and nothing we were ready for.

Our guide met us and went through how the camp had first come about. He also strongly emphasized that this was a place that needed the utmost respect for the people who had been there and who had lost their lives in the most horrific of ways.

He led us through the gate where most of the prisoners would have had to walk as well. As we walked under it we just looked at each other and took a deep breath. A lump had formed in my throat. At Auschwitz, The Nazi’s opened their first camp for both men and women. This is where they perfected their use of the gas that went on to kill so many innocent people.

You were able to view the rooms where the prisoners were housed and the offices where they were documented on entry to the camp. There was one corridor where you walked past hundreds of people’s photographs who had been at the camp. There were two photo’s of the person and underneath was stated their name, date of entry into the camp, what trade they had and the date they died within the camp. It broke my heart that most only lasted a couple of months.

You got to see Cell Block 11 where some of the horrendous experiments were carried out on people and where the first gas chamber was developed. The gas chamber at Auschwitz was relatively small compared to the ones that were at Birkenau. They used to rev motorbikes so the other prisoners in the camp could not hear their death cries. We got time to reflect while looking at the Wall of Death where thousands of prisoners were marched into the courtyard and executed by firing squads. All of the displays were very confronting and moving. At one stage looking at the displays I was brought to tears for the first but not the last time of the day.

The displays were just so confronting, not only because of what they were off but the sheer size in what was there. There was clothing, glasses, saucepans, luggage, kids dolls, shoes and people’s hair. The children’s belongings really struck a sad chord with me. How could someone do this to poor defenceless children? What posses’s someone to think that this is normal behaviour?

How could this have been allowed to happen? All these thoughts and emotions run through your mind while you are there and it is all right there in front of you. As you go from room to room of people’s belongings all you can do is shake your head at the sheer waste of human life, the madness. I inadvertently felt tears running down my checks at these thoughts and images I was thinking and seeing. Each room bought a new horror, a new feeling of dread for the people who lived this.

The Auschwitz Camp and The Birkenau Camp (or Auschwitz 2 ) are about a kilometre apart. Auschwitz is nearly fully intact from what it was like in the 1940s. Birkenau, on the other hand, was nearly totally destroyed with only a few buildings remaining. This does not in any way diminish the feelings you get there. There are foundations, for as far as the eye can see, of buildings that used to be there. Then there are thousands upon thousands of meters of barbed wire fences.

To get to Birkenau, there are buses running between the two sites that you will take with your tour group. You arrive at Birkenau to see another iconic symbol of the camps.

The sheer size of Birkenau (Auschwitz 2) is just incomprehensible. Auschwitz in itself was relatively small, but this camp housed hundreds of thousands of people at one time. This place is where the real tragedy and misery unfolded on a massive scale. There is not a lot of Birkenau left but you can still get a sense of what was here because they still have the wire fences up and ruins of where the buildings were along with some still standing structures that you can go through. The majority of the buildings have been destroyed, but you get a sense with the few buildings left intact, of the conditions that people suffered through here. On the day we went it was overcast and slightly windy, imagine what it would have been like in the middle of winter.

We visited Auschwitz Birkenau with 2 friends. One was Polish and one was German. They where both touched and sad for different reasons. Our Polish friend’s grandfather was imprisoned in Auschwitz, luckily he survived. He told us the story of his grandfather and remembered every time he spoke of the camp he would just cry. He had never been to the camp and we were honoured to be the ones he chose to share his experience with. Our German friend said this to me and I will never forget this “My country did this for glory but only bought shame”.

We walked the train platform that stretches for over a kilometre where the prisoners were unloaded from the trains. At that point, all I could hear was the crunching of the compressed gravel underneath my feet. Our guide showed us the spot where people were most likely sorted into people worth keeping and the ones who weren’t. This was the bit where it completely hit home for me (Bec). Right there would have been the end for my family.

I am fiercely protective of them and right there I would have come to the realisation that there was just nothing, absolutely nothing I could do to save us. How many mothers of the most wonderful children in the world felt that right there? How many of them scrambled ideas in their heads to just give them a chance? As I looked at Mark I knew he was thinking the same thing.  Near the end of the platform are the remains of the two gas chambers that were on-site there and a pond where they emptied the ashes. Our tour guide could not stress enough that Birkenau is just one massive cemetery and that ashes were scattered everywhere around us.

As you reach the end there is a Holocaust memorial that sits at the end of the train line. A plaque reads  “Forever let this place be a cry of despair and a warning to humanity where the Nazi’s murdered about one and a half million men, women and children mainly Jews from various countries of Europe. Auschwitz-Birkenau 1940-1945″  The tour guide explained that this was literally the end of the line for over a million people who got off here and never returned. Some marched straight into the adjacent gas chambers never to see the light of another day.

Auschwitz truly is the saddest place on earth.