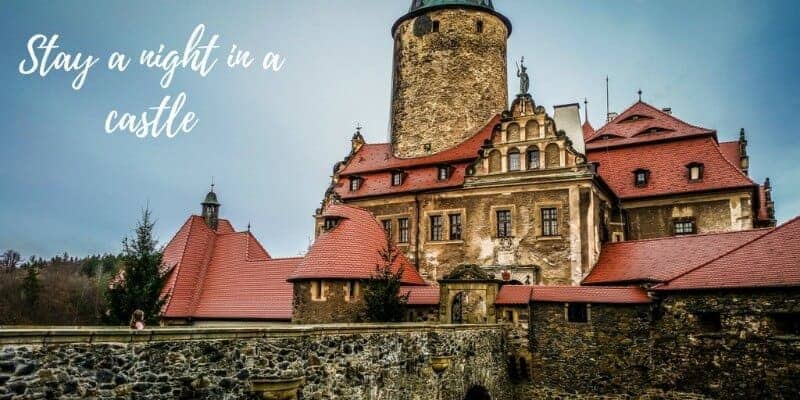 As I looked back on my travel time I thought that I had done a fair bit, seen some amazing places, eaten some fine food and put some big ticks on that must see list. BUT there was one thing that I had never thought I would be able to do and that was stay overnight in a castle. You see I love castles. (I see some of you rolling your eyes!) I have a thing for them. From a ruined castle to grand palaces wherever they are I want to see them. Our friends Adriana and Thomas have taken us to some of the most amazing places we have been on our travels and they know my love for them. It was then they hatched the ultimate plan for me….Zamek Czocha was its name and Hotel Czocha was the destination. 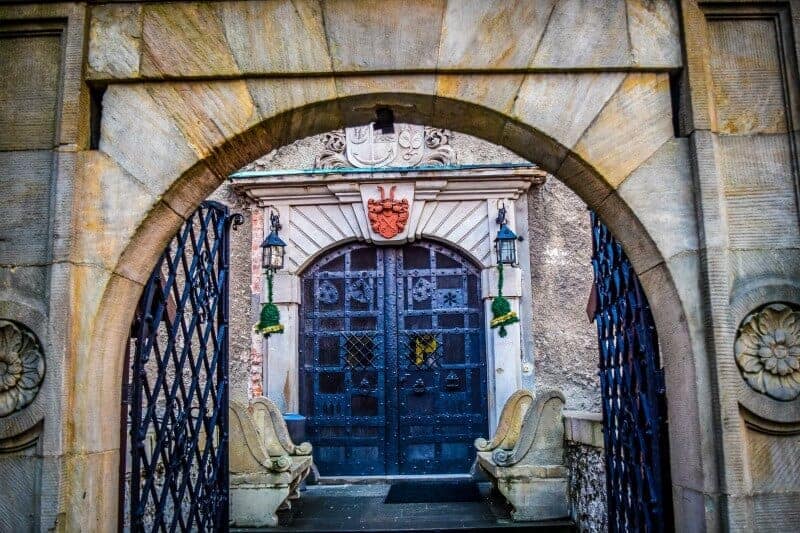 As we left for a trip to Wroclaw there was a smile on their faces that I knew they had something planned but I know better than to ask now, they have the best places planned for us to see that I never ask anymore. I get to sit there and know that I am about to see something amazing. It got the better of Thomas though and he had told Mark who was struggling to keep it to himself as well…there were plenty of hints but I thought it would be well out of our price range to stay overnight in a castle.

The first thing I noticed as we started to slow was the huge wall on one side of the road. We pulled into a small car park and we all piled out of the van. We crossed the road and went up to the enormous gates that close the little town on the inside off to us and Thomas spoke to the gentleman guarding the gates. He opened a little door for us and told us to walk through. By then I had a fair idea of what was going on but I was still a little unsure about where we were actually staying. We wandered down the cobblestoned streets to the end of the road and that is where it was…Zamek Czocha or Czocha Castle in English.

As I stood there in shock (ok there was probably screaming and heaps of excitement) they all told me this is where we were going to stay overnight in a castle. The girls were just as excited as I was, Marley was yelling ‘I want to stay in a castle’ (I am not actually sure where she thought she was going) and we made a beeline for the bridge over the moat to get into Czocha Castle. Thomas went back to get the car and we took the time to have a look outside. My favourite place was up in the little pergola over looking the river and another beautiful Polish landscape. It was pretty cold but at that stage but there was no snow for us to see at Hotel Czocha. 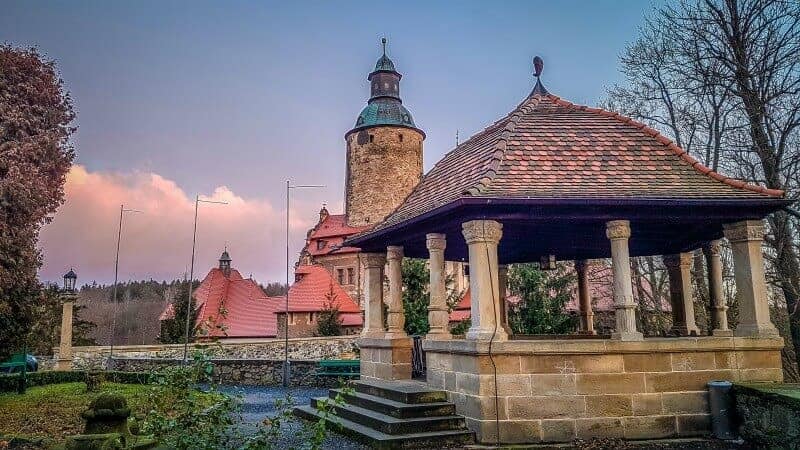 You had to walk over the bridge and through 2 sets of huge heavy doors, to get into the main entrance of Czocha Castle. The girls were dying to get inside (and so was I) to see where we were staying. The check in desk for Hotel Czocha was in a small alcove just off the main hall way. We checked in to our castle accommodation and we were given the directions to our room. This was probably the one time in my life that is wished I could run up stairs…it was one of the biggest staircases I have ever seen and it was grand but our room was all the way at the top! As we rounded the corner our room was right in front of us, room 201, my castle vacation was about to start. 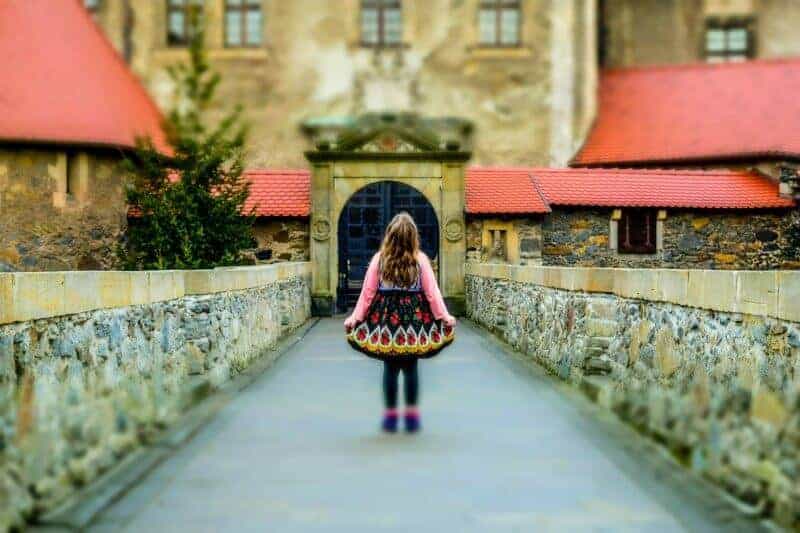 We unlocked our door and walked in…it was amazing! We had a huge big bed for Mark and I and the girls had a beautiful single bed each with high wooden headboards. Our room was large with a bathroom off to the side as well with a little table and chairs under the window. There was also a little cupboard off to the side that was a little strange. It had plenty of space in it and then a little door behind the door. As the girls ran around the room laughing I looked out the window to see that we were facing the moat out the front of Zamek Czocha.

The bridge was lit up and looked like a runway right to the front of the castle. We took some time in our room before we went to have a look around our floor. It was the second floor of Hotel Czocha and there was a tiny open doorway at the end of our hallway that led to a very narrow staircase. Both the girls were disappointed that I said that would be something to be explored in the daylight hours. 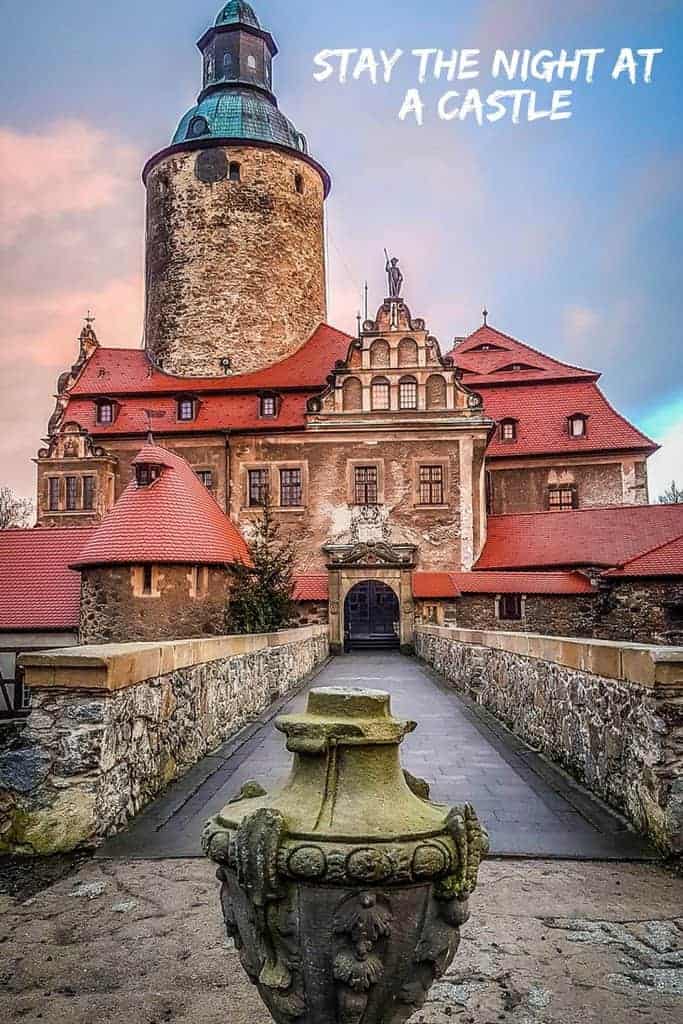 We headed down stairs to have a look at the Grand Hall and took a door that led us outside to a small courtyard. There was a well there and I could not go near it for some reason and the whole courtyard had my hairs standing on end so I went back inside. We went to the Hotel Czocha Restaurant for dinner and it was so beautiful…we all felt like royalty as we sat and ate. I was surprised though that it did not cost as much as I thought it would seeing there was nowhere else to go to eat near Czocha Castle. We all just sat and enjoyed ourselves until it was time to head back upstairs, I was still so excited…we were going to stay overnight in a castle! 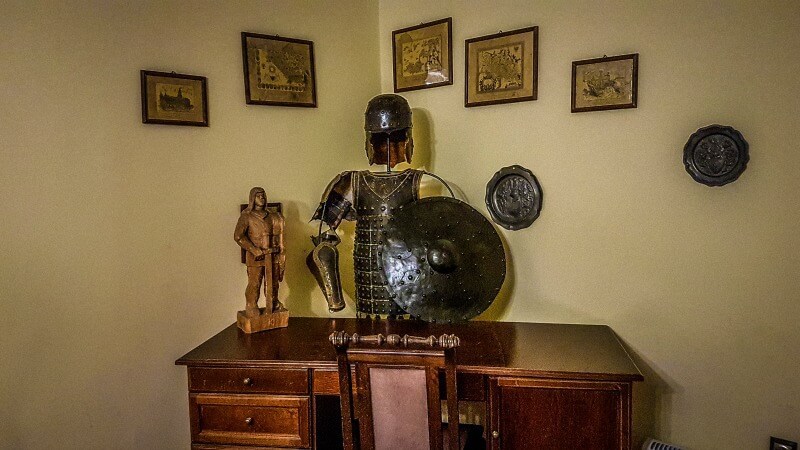 We took our time going back up to our rooms to have more of a look around and we also decided to take one of the medieval castle tours that were offered the next morning by Hotel Czocha. There was a medieval castle tour ghost tour but unfortunately, we missed it by one night so we were unable to go on it. After the daytime tour the next day I was actually pretty happy we had missed it. We got back to our room and the girls had a bath each and then got tucked in while I sat under the window at the table gazing outside. 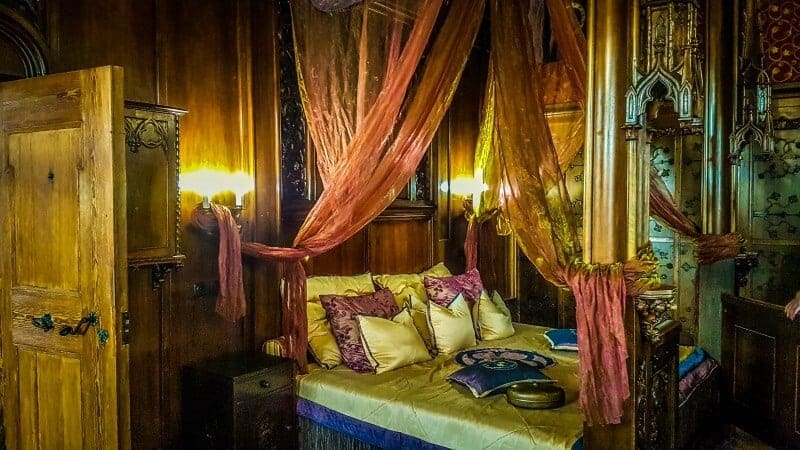 The night seemed to be over in a flash and before we knew it we were wandering the Polish castle on the medieval castle tours. We were told that a castle had stood on this spot since the 13th century but in 1793 it was burnt to the ground only to be bought by a cigar manufacturer and rebuilt in 1909. There were some very gruesome stories of things that had gone on in the Zamek Czocha and I found out why the well had made me so uncomfortable. Two wives had been put down there by their husbands but luckily there was now a grate over the top to stop anyone going down there again. I still got a bit nervous when the girls went near it though. 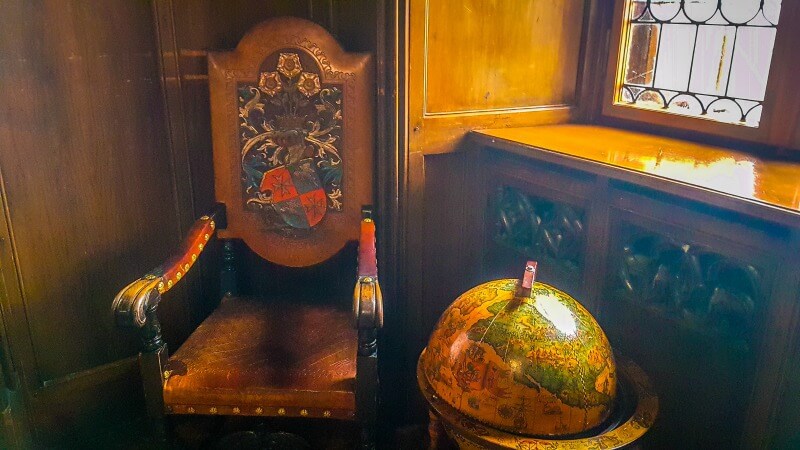 We heard about the baby that cried at night and its mother that wandered the halls of Czocha trying to get to the fire place in the Great Hall. The story is that the owner went away to war only to return to a wife with a son. It was not his and as punishment, he bricked the baby into the fire place and put the wife down the well. We also went upstairs to a bed room with a secret trap door on the side of the bed. The story goes that if the owner at the time was not happy with his mistress he would open the trap door and push her in there which led her straight to the dungeon. I was really starting to think the men who owned Czocha Castle in the past were pretty mean at times. 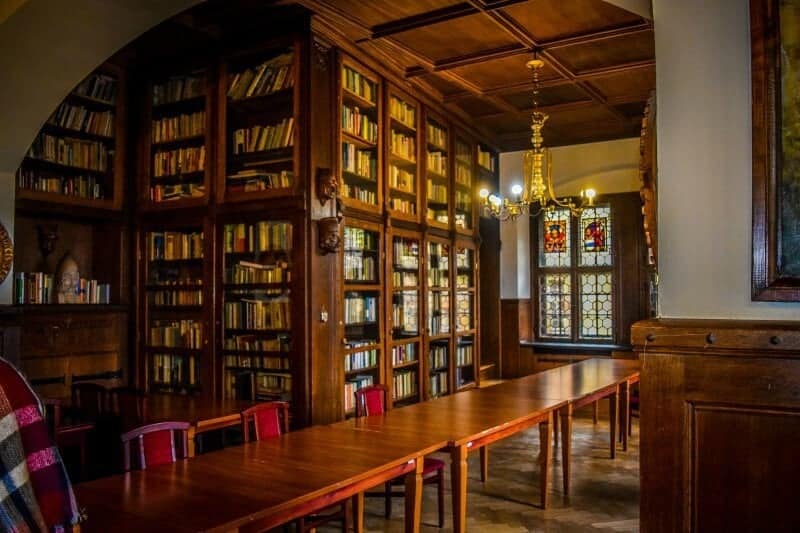 We went through little, hidden doors that took us through passageways and into other little rooms. Sometimes they led into places you had no idea there was even a hidden doorway in them. It was so cool! I think that maybe the little strange cupboard in our room was used like this at one stage. But then my imagination got the better of me and I really started thinking about what it was used for and then I started freaking out. 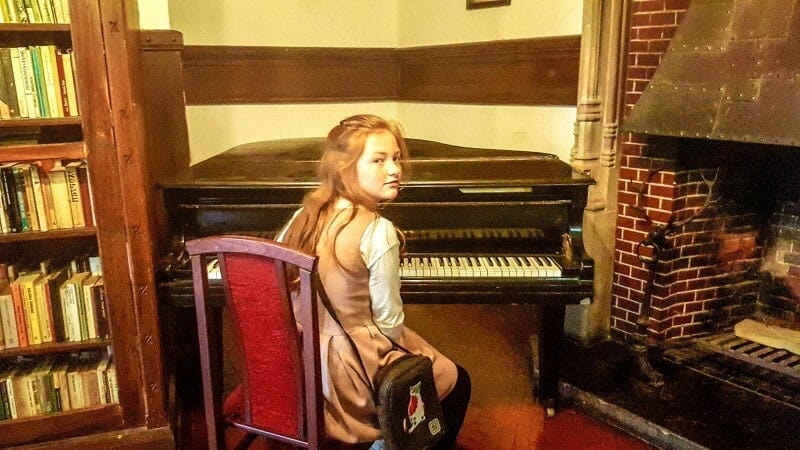 We ended up right out the front of our room and the next bit of the tour was the little door way with the steps. The girls were so excited that they were going up there that I thought I would go with them too. The first set of steps were pretty good. It was a small passage way and the steps were uneven in parts but we got up there. Then you had to go up some wooden steps and they were pretty ok (have I said I am terrified of heights?) I got to that platform and I was faced with a ladder that looked like it had been there for years and that was it.

Mark had to come down and get me and take me all the way down to the bottom. I was so embarrassed but we were pretty surprised that I got as high as I did. Apparently, the view of the Polish landscape up in the tallest tower at Hotel Czocha was really good. The pictures I saw were good! I so wish that I was able to do that sort of stuff but if there is a wobble or I can see through the steps I just can’t get any higher. Plus Mark told me later that as a punishment people were hung up there and tortured and there were little cells as well. I walked straight past them but I didn’t even notice them. 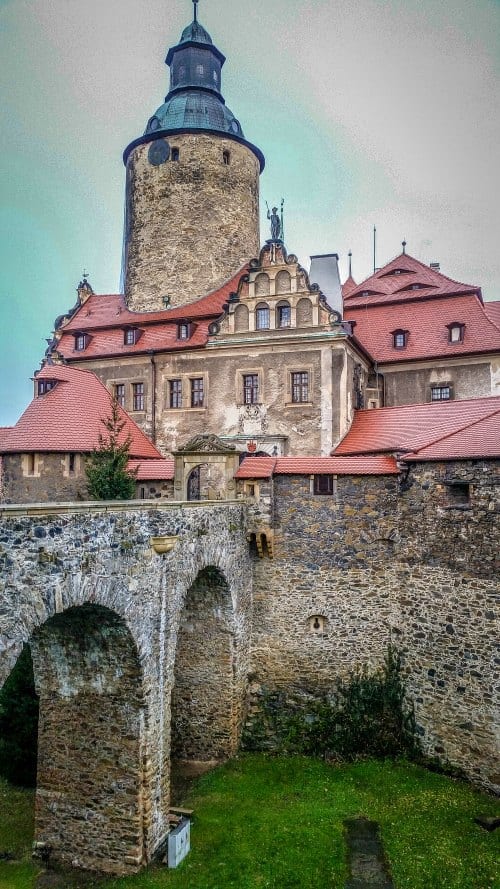 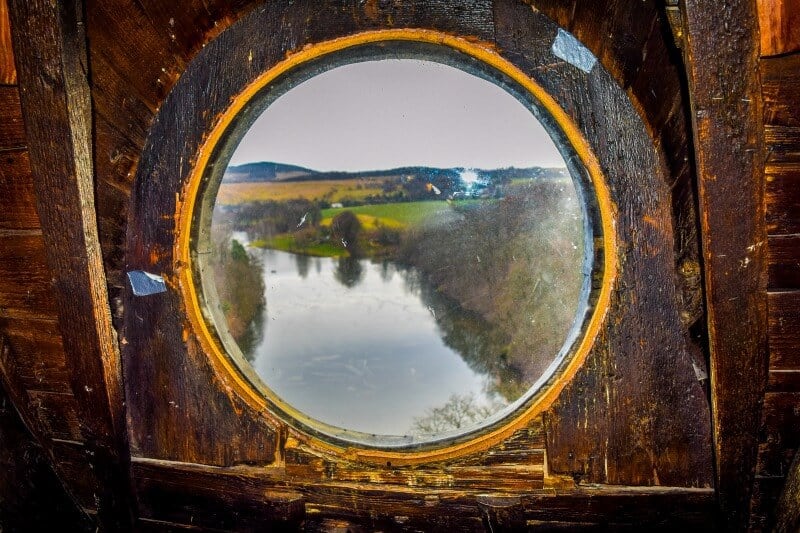 After that, the medieval castle tour was over and it was time to get our bags from our rooms and check out of our amazing castle accommodation at Hotel Czocha. While Czocha is not one of the most famous castles in Poland it is definitely one of the top Poland attractions for us here at Wyld Family Travel and should be high on your list of what to see in Poland on any trips to Poland you might take! I took an extra minute by myself in our room before we left. We thought a stay overnight in a castle was something I would never be able to do and now it is a big tick for me. I had an amazing time at the beautiful Czocha Castle and I will definitely be staying in another castle…one day! 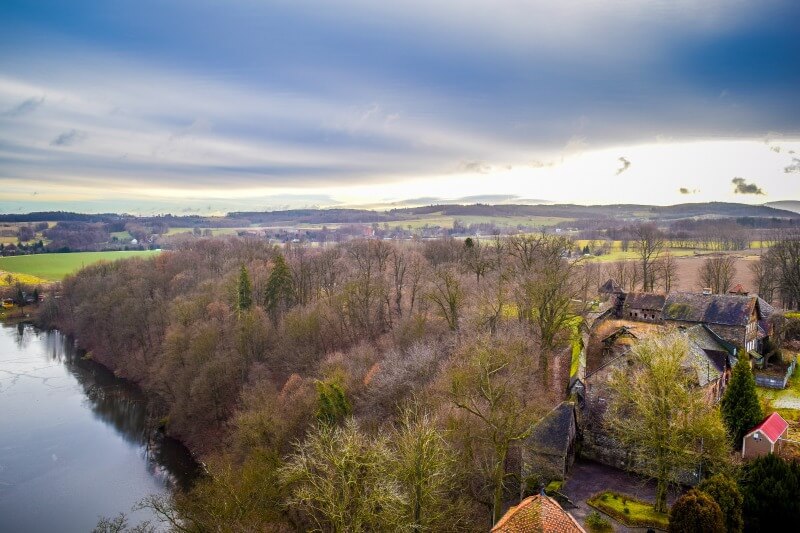 Below is 2 more articles on Poland attractions from Wyld Family Travel that we hope you would like. Please click on the images below to read these stories.

14 thoughts on “Our night at Hotel Czocha Castle”