witzerland, officially the Swiss Confederation, is a sovereign state situated in the confluence of western, central, and southern Europe.[9][note 4] It is a federal republic composed of 26 cantons, with federal authorities seated in Bern.[1][2][note 1] Switzerland is a landlocked country bordered by Italy to the south, France to the west, Germany to the north, and Austria and Liechtenstein to the east. It is geographically divided between the Alps, the Swiss Plateau and the Jura, spanning a total area of 41,285 km2 (15,940 sq mi), and land area of 39,997 km2 (15,443 sq mi). While the Alps occupy the greater part of the territory, the Swiss population of approximately 8.5 million is concentrated mostly on the plateau, where the largest cities are located, among them the two global cities and economic centres of Zürich and Geneva.

Text is available under the Creative Commons Attribution-ShareAlike License 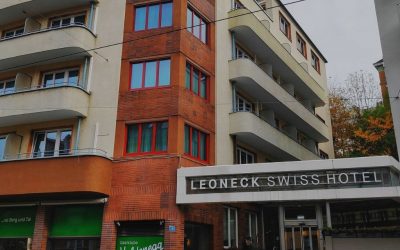 As you walk into the Leoneck hotel you are greeted by fresh, crisp decor and a lobby that is bright but as you will find out the single most outstanding feature of the Leoneck Swiss Hotel is the staff. You can have all the most beautiful decorations in your hotel but...