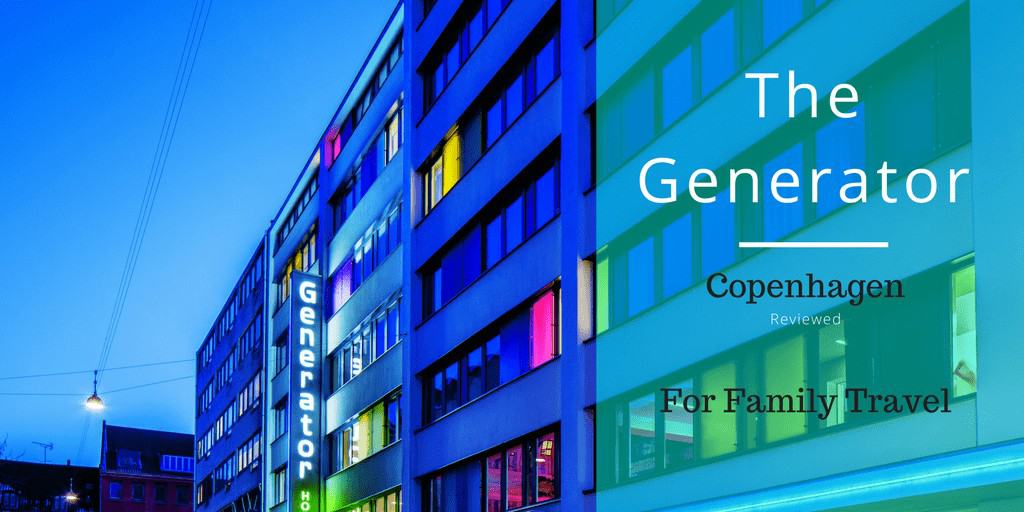 When I think of hostels I generally think of dirty shared rooms with drunken teens and twentysomethings running around drunk making noise to all hours of the morning. That is not The Generator Copenhagen. Could we have been more wrong?

While looking for affordable accommodation in Copenhagen, the Generator Hostel kept popping up. Could a hostel really be our choice of places to stay in Copenhagen? We have never really as a family embraced the whole staying in a hostel experience until this trip.

As we have kids the whole communal shower and toileting situation is one that does not sit well with us. Who wants to get up in the middle of the night to accompany their kids to the toilet. In today’s society that is a must, I would think.

The Generator Copenhagen will forever change the way you look at a hostel. Yes, to be honest, our room was small. We had 2 sets of Bunks and 4 suitcases. Once we were in the room there was only just enough room to swing a cat.

The rooms to be fair though were very clean, as clean as any hotel. The mattress was as good as any of the places we had stayed in during our 8 weeks in Europe. The blankets were warm enough to keep the Danish winter cold weather at bay.

The shower had good heat and excellent water pressure, with room to get changed. Our towels were clean, big and fluffy, which our girls were very impressed about. We, unfortunately, had a sick child on our first night at The Generator so we had to go down to the reception and ask for some new towels.

I had done my best to clean it but the guy behind the desk was brilliant about it and we came back to a beautifully re-made room which was much more than I expected.

We were impressed with the sign on the door that stated that making noise in the hallways at The Generator Copenhagen would not be tolerated so please use the communal area that is staffed 24 hours a day. Staying in hostels with kids could work?

For latest prices at the Generator Copenhagen click here!

The Generator Copenhagen has amazing facilities for the whole family

The real magic of the Generator was its communal downstairs area. It had 24 hours reception with vending machines. The reception sells passes and tickets for all things Copenhagen. It is like having an insider’s guide to Copenhagen on the other side of the counter and there is never any problem if you need some help.

It also had a wall of recommendations for things to do in Copenhagen that came from what other people who had stayed were recommending. There were many paid and free activities to do in Copenhagen. There was even has a computer and internet access for dinosaurs that don’t carry smartphones and laptops. I really thought that type of humanasourus was extinct!

It had a restaurant not just serving the usual snacks such as fries and chicken wings but actual meals. Chicken, pork belly and brisket were on the menu along with the usual suspects such as an array of burgers, mac and cheese and fries.

A full-size bar serving all things Carlsberg on tap such as its flagship brew, Tobourg, IPA and a really, really good cider. Just quietly the wife and I partake in a few of these. Happy hour is on twice a night 4-5 and 9-10 which is great since Copenhagen can be expensive. Half price Pints and 50 Krona basic spirits can go down very well after a stressful day of transiting or a day of sightseeing.

The communal area at the Copenhagen downtown hostel features big screen Tv’s showing sports and movies, fuse ball tables, darts and even shuttlecock tables all inside for your amusement. Couches, chairs bar stools tables all for you to relax on while chatting, meeting new people or just checking Facebook.

Outside was a beer garden for when the sun shines in Copenhagen. We were assured during the summer it’s not all grey and gloomy. The centrepiece of the outside area was an indoor bocce court. Wide enough for few games to be played at a time over a few beers. Perfect!

Has your family stayed at a hostel?

We as a family spent a lot of time in the communal area. Wifi was available which kept the kids happy and most importantly quiet. We were nearly able to imagine we were kids free out having a drink somewhere. It was great for our kids who carry their tablets everywhere with them.

They just put their headphones on and zoned out while enjoying a soft drink while the adults chatted. After 8 weeks of being stuck with their parents nagging them and a painful sister, it was great to see them relax and unwind in the hostel for kids.

We were not the only family staying at the Generator, there were babies wandering around. The Generator Copenhagen seems to have found the perfect mix for all.

The Generator has to be one of the best hostels in Copenhagen. It is family friendly but also great for singles and couples. Each night after 9.30 when the families have retired they have live music, a DJ and another number of activities going on. The Generator is suitable for everyone from family travellers to people backpacking Europe. We recommend The Generator Copenhagen for families!

At Wyld Family Travel we highly recommend stopping at The Generator Copenhagen on your next visit. It has a great atmosphere, is family friendly, close to all the sights and cheap on the wallet. Its centrally located to all things to do in Copenhagen. We stayed in a four person room with ensuite.

Wyld Family Travel in no way received a discount or free stay for this review. We just believe in promoting a good product and we found The Generator Copenhagen for families and to be a great place to stay

The Copenhagen Metro system is a rapid transit system covering 20.5 kilometres. Public transport makes things to do in Copenhagen much easier. The Metro has 22 stations, of which 9 are underground.

Further expansion of the system is being built as we witnessed when we visited Copenhagen. The expansion being built is a city circle line taking you to all the tourist attractions in Copenhagen.

Copenhagen has four lines of waterbuses, or locally known as Copenhagen Harbour Buses. This network of waterbuses serves 10 stops on the Copenhagen waterways. four on the Amager-side and six on the Zealand-side of the harbour.

How to get to Copenhagen:

6 thoughts on “The Generator Copenhagen Reviewed – For Family Travel”