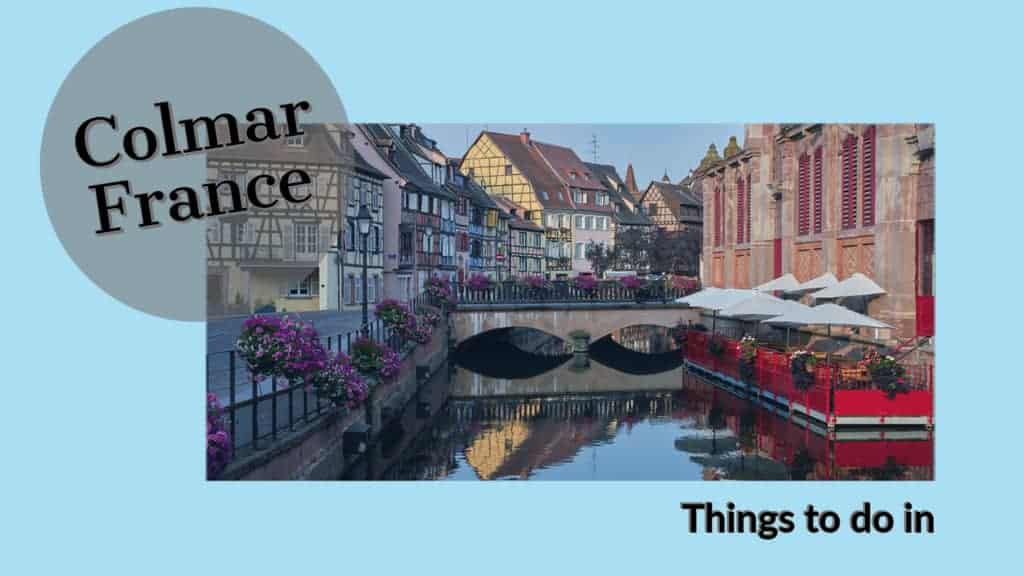 Exploring Colmar is like jumping into a fairytale. Amazing coloured wooden house, blooming flowers and colours, stalks on roofs, the sort of stuff that inspired stories like Beauty and the Beast. Colmar is charming, enchanting and absolutely captivating for all its an assault on the senses both sight and taste. You will find some amazing things to do in Colmar.

Colmar is located in North-Eastern France surrounded by the Voges Mountains on one side and the fertile soils of the Rhine basin land on the other side. Located in the Alsace Region within a stone’s throw from both Germany and Switzerland.

What makes Colmar and the Alsace so special is a mashing of influences from France, Germany and Switzerland. Over the centuries Colmar has belonged to both France and Germany on numerous occasions.

Much like the Petite France area of Strasbourg, Little Venice in Colmar is all about canals, colours and traditional Alsace houses. In the Krutenau district, on the edge of the old town, the half-timber Alsace house sits picture perfect on the banks of the Launch River. Calling it Little Venice is a stretch is the Lauch River meanders through only a small section of Colmar.

For those wanting to fully explore Little Venice, you should consider a walk in the area. Start your walk at the statue in Place de l’Ancienne Douane. Follow the canal until you reach the Covered Market hall of Colmar. The walk is a little over a kilometre and should take you under an hour. Little Venice was the old merchants’ quarter of the town.

It is where you would find the tanners, butchers and fishmongers in the day. Different colours were used to identify the different types of businesses. If you were a fisherman your house was blue, or a butcher would have a red house and so on.

The Colmar Market Hall was built-in in the mid 18th century. Originally used a market for many years it has been through transformations over the years housing different things before now returning to its original use. This big brick building on the banks of the Lauch is now home to many small businesses selling the best in Alsacian foods.

You will find butchers, bakers and maybe a candlestick maker. In reality, there are about twenty merchants selling high-quality products, fruits, vegetables, meats, fish, cheese dairy, bakery and pastries. You can grab a coffee and cake and sit beside the Lauch River and enjoy the atmosphere of the area.

See the Statue of Liberty in Colmar

For those driving into Colmar from Northern Alsace may think they are seeing things. In a nondescript area of town, in the middle of a roundabout people will find the French Statue of Liberty.

Try the wine in Colmar

Colmar and the surrounding villages are the centres of Alsace wine. The Alsatian vineyards run along a line of over 100 kilometres through the foothills of the Vosges Mountains, from Marlenheim in the north to Thann in the south. The Alsace Gewurztraminer, Riesling, Pinot Gris, Pinot Noir, Pinot Blanc, Muscat and more are ready to tantalize and ignite your palate.

Alsace Wine varieties are derived from the single grape type Pinot Noir. We recommend a visit to the Wolfberger. Wolfberger has been making wines since 1902 after being founded in Eguisheim, near Colmar.

Wolfberger buys its grapes from over 450 local grape growers and works as a local cooperative for growers. You will find Wolfberger in Colmar at, Cave Wolfberger Colmar 5 Chemin de la Fecht, 68000 COLMAR

If you are travelling to Colmar with teenagers in your group, it is allowed that supervised people over the age of 14 years are able to have a small taste of wine with a meal. You can double-check this with your waiter at the place where you are dining to be totally sure.

Things to eat in Colmar

The Alsace region is known for its amazing food and wine as mentioned above.  The Alsace has the greatest density of Michelin-starred restaurants in France. There are a few foods that we highly recommend trying while you are visiting Colmar and the surrounding areas. The following foods are a must-try

There are areas around the city set up with wooden booths selling all things Christmas. You will get local Christmas foods, beers and wines stand selling crafts, Christmas decor, gifts, trinkets and treasures.

The Ghulwein (hot wine) is a must as you walk the streets shopping, eating and taking in the atmosphere. Colmar does not forget the kids, you will find Ferris wheels and amusement rides set up around the old town.

You will have your own set of headphones that come with 16 different languages to suit tourists for every corner of the globe. The little green trains departure every 30 minutes from Rue Kléber near the Unterlinden Museum. These environmentally-friendly electric trains run 7 days a week in Colmar.

Colmar Museums have a wide range of topics. You will find the sweet spot at the Chocolate Museums and fine arts for the senses. France is a country full of history and culture, Colmar helps showcase the best of it through its museums.

Take a Gondola ride in Colmar

The Little Venice area of Colmar would not be true to its name if you could not take a boat or gondola ride. Float past the fairytale houses and smell the blooming flowers. You can catch your Colmar boat at the bridge, Saint Pierre.

Places to visit around Colmar

There are so many places to visit around Colmar that you will be spoiled for choice. Here are our top tips to make your trip to Colmar epic.

Perched high in the Vosges Mountains is Chateau Haut Koenigsbourg. Haut Koenigsbourg castle, which was built in the 12th century, nearly completely destroyed, and later restored in the 1900s. Today it is one of the most popular attractions in the Alsace. This classical looking castle is open for both guided and self-guided tours. You can view many stately rooms, the armoury and enjoy sweeping views of the Alsace from the top of the castle. On a clear, beautiful day you can get views all the way into Germany from the highest point of the castle is amazing. Koenigsbourg can be reached via Ribeaville from Colmar in a little over 30 minutes.

For those of us who loved the Little Venice area of Colmar a trip to Strasbourg to visit the La Petite France area of the city is a must. Petite France is the city’s busiest tourist area. The La Petite area is known for cobblestone streets, canals, and well-preserved half-timbered homes.

Strasbourg features Alsatian eateries, souvenir shops and small squares. A trip on the Batorama Boat tour is the best way to see the La Petite area, A hour tour takes in all the highlights along the waterways from La Petite France to the European Parliament area.

Neuf-Brisach in the Alsace is a fortified town that was intended to guard the border between France and the Holy Roman Empire and, subsequently, from Germany in the many wars that were fought. Neuf-Brisach is a UNESCO World Heritage site and was it was founded in 1699 at Louis XIV’s behest.

What makes it unique is its hexagonal design that allowed it to be defended from any direction. It is considered a masterpiece in Military design by the renowned architect Vauban. There is a great walking tour that takes you around the town showcasing the bastions and the old town centre.

Places to stay in Colmar

Accommodation in Colmar comes in all shapes and sizes to fit all groups from singles to families. There is a burgeoning luxury hotel scene in the city as well as hotels and apartments.

An apartment in Colmar is another popular option for your accommodation. The apartment option is affordable and often gives you great choice for a number of rooms, location and parking choices for your stay in Colmar. Apartments often feature kitchens and kitchenettes so you can cook. Check the map below for apartments and hotels

Colmar really has the best of both worlds when it comes to weather. It has sunny warm summers days with temperatures rising into the 30’s on some days. In the winter the weather drops to around zero at times with light dusting of snow. Overall Colmar in the Alsace has great weather, not to hot not to cold.

How to get to Colmar France

There are so many options on how to get to Colmar France, all you need to do is pick the one that best works for \you and your trip to Colmar.

How to get to Colmar by plane

Both Strasbourg France and Basel Switzerland airports are located with 70 Kilometers of Colmar. Flights from Paris and International destinations arrive daily at these two International Airports. You can pick up a hire car at any airport

How to get to Colmar by car

Colmar is a popular destination to access y car from Strasbourg, Basel Switzerland, Freiburg Germany and even Paris. The A35 Freeway connects the German border near Karlsruhe with Basel Switzerland via Strasbourg France, with easy access to Colmar.

How to get to Colmar by train and bus

Colmar lies on a train line between Strasbourg France and Basel Switzerland. A train to Colmar takes less than 45 minutes from either destination. You can find your trains to Colmar here. Flix Bus and Eurolines both run services through Colmar. You can find your bus tickets here.

We hope this has inspired you to visit Colmar and the Alsace. You can find more inspiration from Wyld Family Travel on our France destination page.

We hope this article from us here at Wyld Family Travel has you inspired to plan holidays in the Alsace region. There are so many things to do in the Alsace to visit that will have you entertained and inspired on your vacation. For more amazing ideas on where to holiday in France and the Alsace click through to our France Destination Guide page for more brilliant inspiration.

More travel inpiration for your trip to France 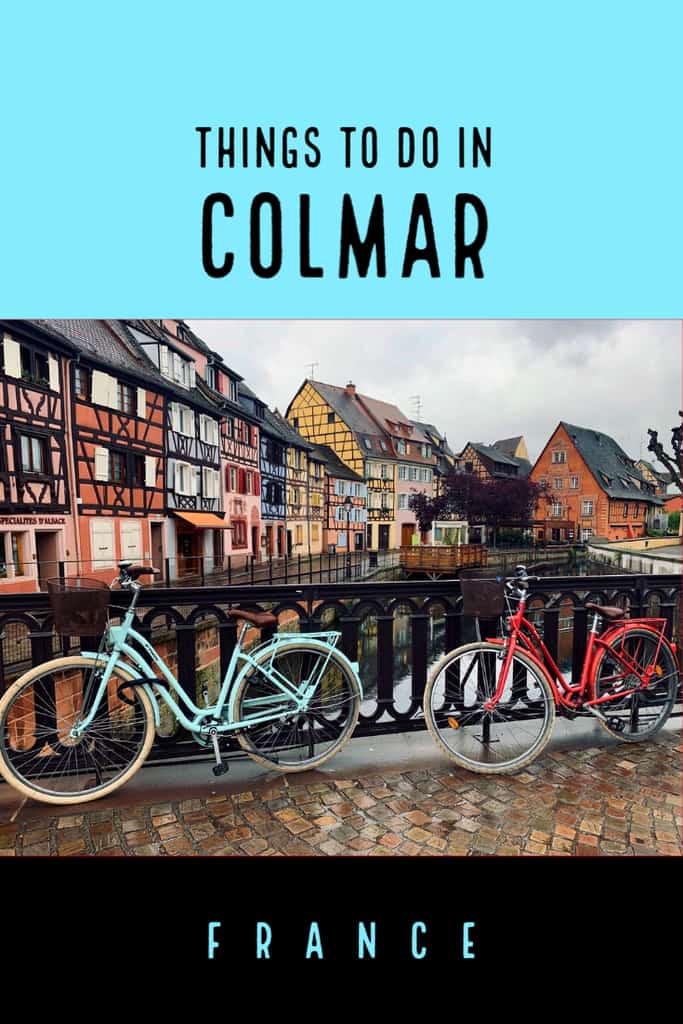 3 thoughts on “Things to do in Colmar France”