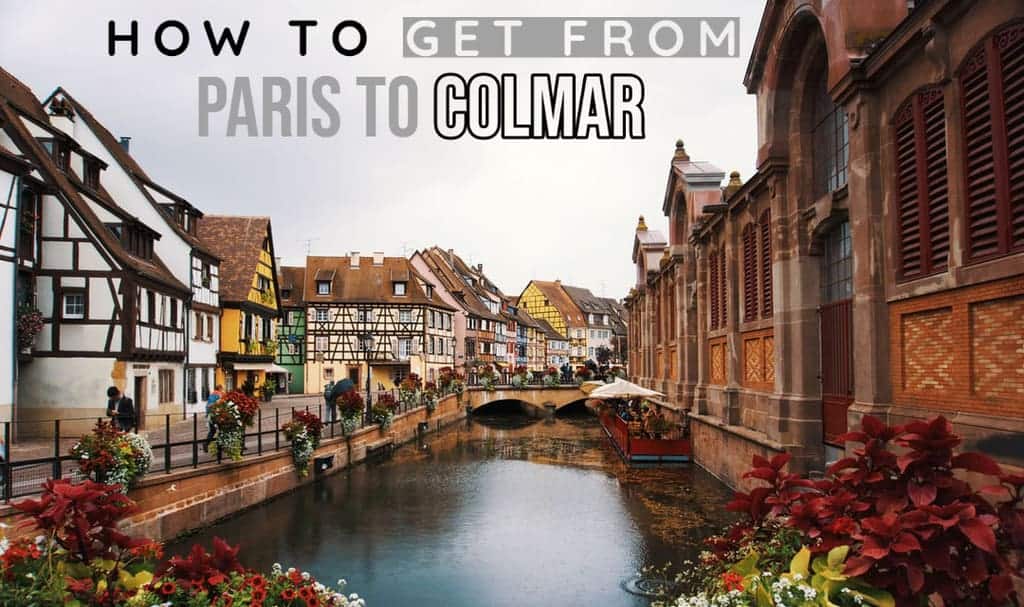 For 6 weeks every year, all the roads in France seem to lead from Paris to Colmar in the Alsace region. The Colmar Christmas Market is one of the most traditional and popular markets in Europe and it is at the top of many lists as a must-visit destination in France. This makes November and December the best time to experience Christmas in Colmar if you want to experience one of the best Christmas Markets in the world.

The Christmas market in Colmar is one of the premium attractions held every year in the town. It draws thousands of visitors from all around the world.

Besides celebrating Christmas in Colmar during the rest of the year people visit Colmar for the fine wine that is grown in the region, People come from all over the world for the artisanal foods produced in the Alsace and the Petite France style of buildings that are world known for their colour and unique style.

Many travellers will be coming from Paris to Colmar. Let’s take a look at the different options available to get you from the French Capital to Colmar.

Colmar is located in the what’s called the Rhine Basin. An area that sees France, Germany and Switzerland all nearby. Colmar is the 3rd biggest city in the Alsace Region of France and only 20 kilometres from the German Border.

The distance from Colmar to Paris is 492 kilometres. Let’s take a look at all the options for you Paris to Colmar trip.

Using the Paris to Colmar train

There are a number of options for getting from Paris to Colmar by train. The fastest and most efficient method is with the TGV High-Speed train network in France.

Although there is no direct TGV Paris to Colmar line, you can arrive at Strasbourg France or Freiburg in Germany. All trains departing for Colmar from Paris use the Paris Gare de l’Est or Gare de Lyon train stations. All trains arrive into Colmar station.

How long is the train from Paris to Colmar?

Strasbourg is located 73 kilometres north of Colmar. The average travel time between Paris and Strasbourg is 2 hours and 21 minutes. There are around 14 trains running this route every day. You will arrive at Strasbourg Gare Centrale Train Station

From Strasbourg Gare Centrale Train Station you can catch a direct train to Colmar. Trains from Strasbourg to Colmar take around 30-35 minutes. There is an average of 29 trains a day between Strasbourg and Colmar, leaving approximately every 36 minutes

All up the Paris to Colmar train time is around 3 hours train time with a short wait in Strasbourg to connect to Colmar.

The Colmar Train station is located just on the edge of the old town tourism and shopping district.

How to book your Paris to Colmar train tickets

Nearly all trains in Europe can be booked through the country’s national railway site, for France, this is the SNCF. We always try and book our European trains using Omio, who makes everything easy and straight forward. You often find the National Carriers website to be confusing and the language translations not quite right.

In general, tickets can easily be reserved a few months before you travel to help with your trip planning. Prices to Strasbourg start from 58€

Comparing all train times and prices between Paris and Colmar is made simple by Omio’s fantastic booking service, which is totally secure with tickets booked in your home currency and language

Omio will send you a ticket confirmation and tickets that can be either printed out or shown via the mobile app for your train trip from Paris to Colmar.

Freiburg is closer to Colmar than Strasbourg. Freiburg is only 51 kilometres away. The TGV from Paris to Freiburg is 3 hours and 5 minutes. A lack of direct public transport options makes Freiburg an option only if you plan on staying and renting a hire car. There is no direct train or bus to Colmar from Freiburg.

Related: Freiburgs location close to Colmar makes it the perfect base for a day trip. In this article, we explain the best way to get to Colmar from Freiburg

Paris to Colmar by Car

The fastest and best route from Paris to Colmar by car is via the A4 freeway and the A31 The A4 will take northeast out of Paris towards Reims than swing east towards Nancy before crossing the Voges mountains into Colmar.

The journey time will take around 5.5 hours non-stop of 6.5 hours with stops. There will is tolls on the A4 section of the trip. The tolls finish after you swing south-east past Reims.

There is a Carrefour Drive supermarket for you to grab some baguettes, meat and cheese at. We recommend you stop at Luxembourg Park and eat some lunch. There are toilets, chairs and tree coverage for you enjoy your break.

The last 100 kilometres of the trip is the best as you wind your way through the Vosges mountains and onto the plains of the Rhine basin and into Colmar.

Pick up a hire car at Paris Airports
Book with Rentalcars.com

There is plenty of car parking available in the Colmar City Centre. We recommend parking in the Place de la Mairie parking garage underneath the Monoprix grocery store. It’s reasonably priced for the city centre parking location, with a WC for public use.

We have a great article on what to do in Colmar. The article features attractions, food, wine and accommodation. This article will complement any Colmar travel planning you are doing. Read our Visit Colmar article here!

Flix Bus the leader in European bus transport has 3 buses a day running in the Paris to Colmar route. The Average trip time on the bus, Paris to Colmar is 9 hours 25 minutes.

Flix bus has big comfortable seats onboard, free wifi and toilets to make the trip fly by. Paris to Colmar bus tickets starts at 19.99 Euros per person.

Flix bus picks up at 11 different departure points in Paris including.

Is it possible to do a Paris to Colmar day trip?

Technically the answer is yes, travelling time would be around 3 hours by both train and plane. This does not take into consideration the time required to get ready and get to the train station or airport.

Ideally, if you departed Paris around 8 am you would arrive in Colmar at around 11.30 at the latest you could spend 4.5 hours at the Christmas market and be back in Paris around 7 pm.

A Paris to Colmar day trip would require 11 hours at the minimum.

Flying from Paris to Colmar

There is no airport in Colmar that receives commercial arrivals. The nearest airports are Strasbourg Airport or Euro Airport Basel, Mullhouse, Freiburg. Depending on your airline or flight prices both airports make Colmar easily reachable.

Search plane tickets from Paris to Strasbourg
Fly to Colmar

You can catch public transport from Strasbourg Airport train station to Strasbourg Gare Centrale for 2.80 Euro. From there you can buy train tickets to Colmar (as described above). Of course, taxi’s and hire cars are available at the airport.

Car: Hire car is available from the airport. We suggest you book a car prior to arrival and then head to Colmar. Driving time is 45 minutes along the A35. Book your hire car now

We hope this article has shown you how easy it to visit Colmar from Paris. Colmar and the whole Alsace region are full of amazing things to see and do.

Whether it is a Paris to Colmar day trip or staying a few weeks in the region you will love it. Colmar can be reached from major centres nearby. Travel to Colmar from Strasbourg, Basel and Freiburg is very convenient.

We hope this article from us here at Wyld Family Travel has you inspired to visit France and the Alsace Region. There are so many things to do in and around Strasbourg and Colmar. For more amazing ideas on where to holiday in France click through to our France Destination Guide page for more brilliant inspiration.

Some more travel inspiration for your trip to France

Mark Wyld is a father, husband, traveler, and chief destination marketing manager at Wyld Family Travel. Having been to over 35 countries worldwide he knows a thing or 2 about traveling with kids and now traveling with teenagers.  He has been writing first-hand, expert travel guides on this website for over 6 years and has featured on numerous other popular well-known websites. When he is not talking, dreaming, or planning travel he can be found working in disability support. 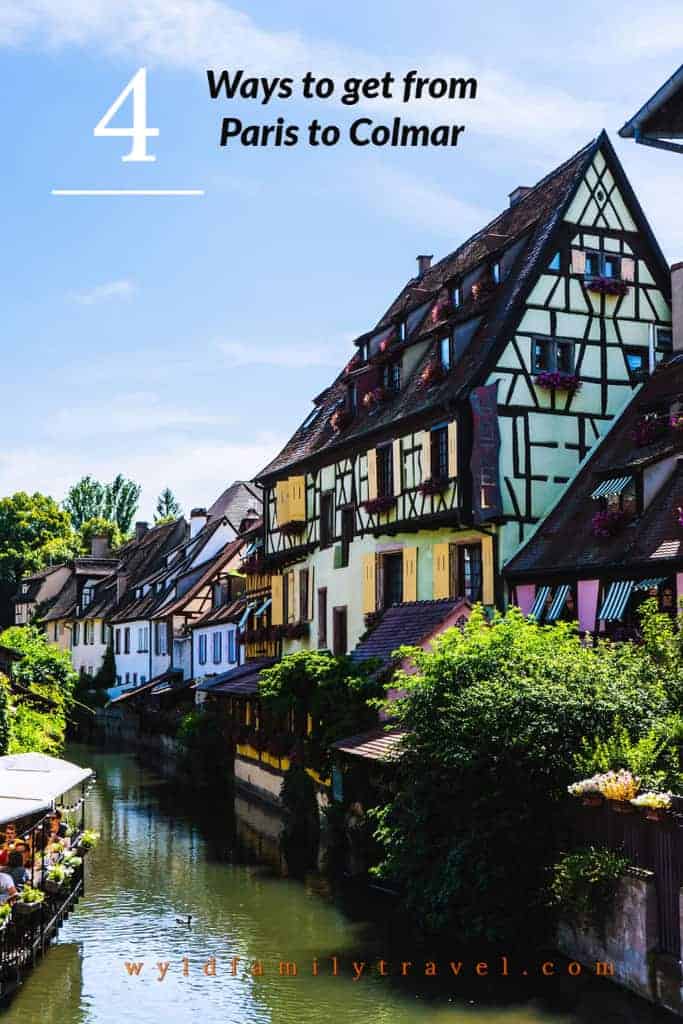