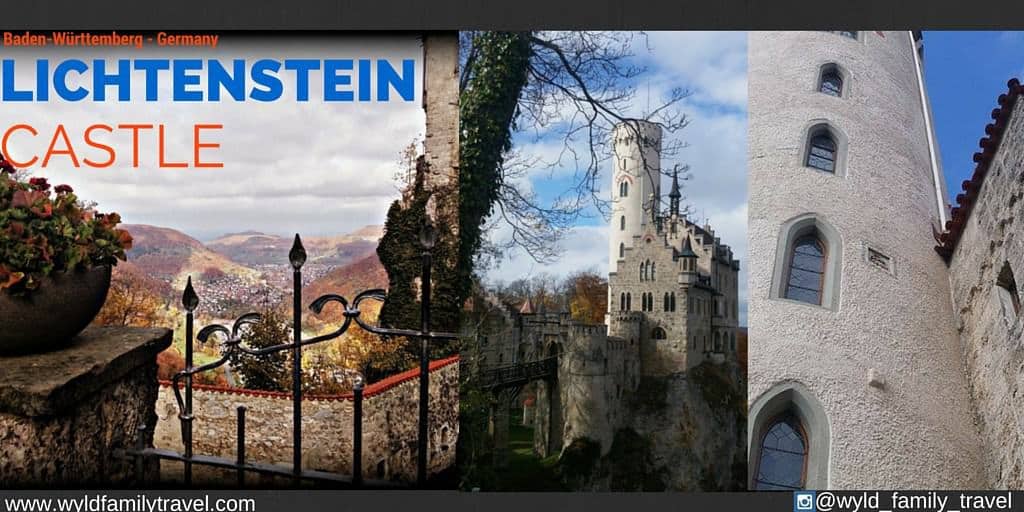 Lichtenstein Castle strikes an amazing pose as it sits perched on a cliff. It is reminiscent of castles you would see in horror movies. Maybe a damsel in distress is crying for help from a window.

Lichtenstein Castle Germany is often referred to as Little Neuschwanstein Castle in reference to their similar style and look of Germany’s most famous castle. It is certainly one of the smallest castles you will visit in Germany. Both castles have corner bastions and large turrets (towers rising from the walls) used for defensive purposes None the less Lichtenstein Schloss is a famous castle in Baden-württemberg Germany in its own right.

History: Records show the original castes dates back to around 1200. Lichtenstein Castle Germany sits perched 800 meters high above the source of the Echaz River on the edge of the Swabian Alps. The original castle was destroyed, once in the Reichskrieg’s War of 1311. After a rebuild, the old castle was again sacked and destroyed by the city-state of Reutlingen in 1377.

The castle was not reconstructed and subsequently fell to ruin. It is today known as Old Lichtenstein.  A new castle was built in 1390. This castle sits roughly 500 m away from the ancient foundations of the castle. Sometime around the 1560’s Lichtenstein Castle lost its place as a seat to the Lords of the land and fell into disrepair.

Lichtenstein one of the best castles in Germany

At the start of the 18th century, the land came into the hands of King Frederick I of Württemberg. The King levelled the remaining ruins of the castle and built a hunting lodge on the site with fantastic views.

In 1837, the land was bought from King Wilhelm I of Württemberg by his cousin Count Wilhelm Duke of Urach, Count of Württemberg who had a love of medieval history, art and architecture. Duke Wilhelm found the novel, Lichtenstein, by Wilhelm Hauff an inspiration and employed Architect Carl Alexander Heideloff to create the famous Neo-Gothic structure you see today. From its completion in 1842, it became the official residence of the dukes of Urach.

Features: Besides the fantastic architecture and amazing views the Castle Lichtenstein features original furnishings from the 1800s and a collection of weapons and arms. The wooden bridge which connects the main tower to the courtyard is amazing. There is a ropes course on the grounds of the castle for both Adults and kids

A tour of the castle

Tours:  There is a 30-min guided tour of the castle Lichtenstein, which cost an extra 6 € per person (3 € for children). The “Basic tour” shows the first floor and 2nd floor of the castle. It showcases the armor and weapons, coat of arms of the Lichtenstein family (a pair of golden angel wings on a blue background) in the Great Hall of the castle, The Knights Hall features gothic style painting on the ceiling and other medieval furniture a substantial collection of medieval arts and a chapel that features some beautiful glass paintings.

Tours of the 3rd and fourth floor are also available along with the special costume tour. In the costumed tour, you get to dress up in period clothes and do a full tour of all floors.

Get a full 360 degree view of the amazing fairytale castle and its surrounds right here!

Pro’s for family Travel: Take the guided tour at 30 minutes it is short enough to hopefully keep the kids occupied. The kids will enjoy the armoury, knights and swords abound in Castle Lichtenstein Let your imagination take you back to another time when Lichtenstein Castle Germany was in its prime. The 30-minute tour is only available in German. For English-speaking guests, a handout in English is available on the tour. It may also be possible to arrange a tour in English or French Kids can try the ropes course from 8 years upwards.

An American tank passing through the valley during World War II  below fired a shell, which directly hit the main tower. Fortunately, the shell failed to explode. This piece of luck saved the impressive building from certain ruin. However, a hole in the plaster where the shell struck remains to this day.

The Fairytale Castle of Baden-Württemberg is so famous there are several recreations of the castle around the world. Locations include a castle in Lietzow, the Old Vanderburgh County Jail in Evansville, Indiana, on a vineyard at Osthofen a couple of centuries ago even a replica erected in Hout Bay, South Africa

How to get to Schloss Lichtenstein

How to reach Lichtenstein Castle: Located in the southwest state of Baden-Württemberg Germany, the two closest major cities are Stuttgart Germany which lies an hour drive, 58 kilometres away via the B27 motorway. Strasbourg France lies 198 kilometres away via the A5 & A8 motorways. The car park is located 150 metres from the castle or alternatively, if you’re feeling energetic you can make the 30-minute walk through the forest from Honau

The nearest train station is Reutlingen Hbf. Reutlingen is connected to the German ICE network. From Reutlingen bus station (5 minutes to walk from the railway station) take the bus no. 7606 and exit at Honau.

Get your Rail tickets for Germany here ⇓

Opening times are correct as of October 2019

Places to stay near Lichtenstein Castle

There are a few small villages that surround the castle. You will find a choice of hotels and apartments that you can stay in. The map below gives you a choice of places to stay to suit your accommodation needs.

I hope this Lichtenstein Castle family Travel Guide provides you with the relevant information. As far as castles in Germany go Schloss Lichtenstein should definitely be on your list. If you love castles we highly recommend you visit Schloss Neuschwanstein, make a trip to Schloss Hohenzollern and seek out Herrenchimsee Palace

*I have not personally been to this castle. Our German correspondents Adriana and Thomas visited Liechtenstein 3 weeks ago and provided me with images and information to craft this article

We hope this article from us here at Wyld Family Travel has you inspired to visit this Disney like castle. There are so many castles in Germany to visit that will have you entertained and inspired on your vacation. For more amazing ideas on where to holiday in Germany click through to our German Destination Guide page for more brilliant inspiration

10 thoughts on “Visiting the spectacular Burg Lichtenstein in Germany”