Things to do in San Francisco with teenagers 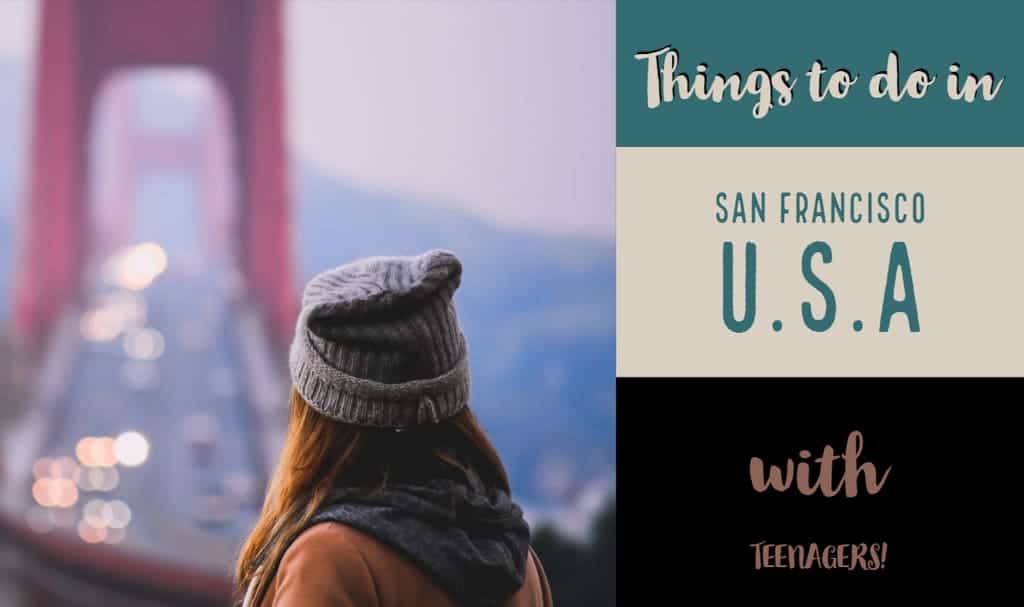 San Francisco is a hip, cool destination that has something for the whole family. San Francisco is often overlooked in favour of Los Angeles. You will find plenty of things to do with teenagers in San Fransisco.

A great destination for travelling with teenagers is somewhere that has a great mix of culture, history, fun and adventure for the whole family.

Let’s explore some things to do in San Francisco with kids.

Bike across the Golden Gate Bridge

There are great views the entire way across the bridge taking in the harbour and the bay area. It’s an opportunity to see one of the world’s most iconic landmarks up close bolts and all!

Rent a bike at fishermen wharf and cruise across the bridge. You can catch the ferry from Sausalito to fisherman’s wharf to return your bike. It is a great activity for kids in San Francisco. For those with a larger budget, a helicopter ride in San Fransico is amazing

Locals Tip: Our Friend Sally from Little Hiccups is an expat living In San Francisco. We asked her for some do’s and donts’s of her new home town.

Avoid driving in San Francisco. SF is not an easy city for parking and the hills can make it trickier – not that I’ve ever driven here! There are rules about which way to leave the steering wheel turned when parking on hills to avoid run away cars should the hand brake not work.

The museum bearing the famous Disney name displays the life and legacy of the man who created the empire, Mr Walt Disney. The Walt Disney museum SF was set up by the descendants of Walt Disney. The museum is housed in a 40,000 square foot space across three buildings.

As you enter the lobby you will see the 248 awards that Disney won for his movies, tv and animations. This main building showcases the man behind the legend .

You will experience interactive galleries, early drawings and animation, movies, music, and audio stations. You will wander through ten galleries, starting with Walt Disney’s early days and inspirations, through to his death on December 15th, 1966.

The Hop on hop off bus tour allows you to explore San Francisco’s most iconic attractions in a comfortable and hassle-free way. Your double-decker coach will inform you with live commentary on passing highlights and city history.

There are 24 different stops, including Chinatown, Fisherman’s Wharf, Ghirardelli Square, Haight-Ashbury and North Beach. Much more than just a bus tour there is options for a cruise across the Golden Gate Bridge to Sausalito and trips to Alcatraz. Choose from several 1- or 2-day pass options.

The San Fransisco Dungeons follows the successful formula of the other Dungeon sites across the world. The concept is half history and half horror as you are taken through the gory history of San Francisco on a 1-hour experience with actors, lighting displays, props and much more, If your teenagers like a bit horrors, shock and awe then the Dungeons in San Francisco is just the attraction for them.

A visit to Alcatraz or the Rock as it is called is always on the top of many things to do in San Francisco lists. This former prison was once home to many of the worst criminals in the United States Penial System. The most famous being Al Capone, the notorious gangster.

A visit to Alcatraz these days includes a ferry ride the island and an audio guide that lets you explore the cell house. The audio tour will guide you through the Alcatraz Prison and tell you all its history. Once the audio tour is over, you can finish taking pictures and explore the Island,

Ripleys Believe it or Not

The Ripleys museum in San Francisco occupies over 10,000 square feet across 2 floors and features over 400 exhibits. For those who don’t know Robert Ripley or Ripleys believe it or not, it was a travelling show and later a TV show that displayed oddities and things of amazement. Shrunken heads, machines of medieval torture, illusions, wax figures and much more. Things that you will find unbelievable!

The kids will love the laser race and Mirror Maze attraction at Ripley’s. In the Laser Race, you must navigate through the web of lasers.  Going over and under lasers as quickly as possible to reach the end of the Maze. Think mission impossible here. The Mirror Maze will have you searching in all directions trying to find your way out.

San Francisco is known for its cable cars, they are iconic. They are used in tourism pictures, movies, tv shows…you name they have appeared. Don’t be fooled though, they are not just for tourist they do actually move locals up and down the hills every day.

They head out at 6 am every morning and run until midnight. For the best views make sure you are on the side that faces the bay area. There are 3 different routes the San Francisco cable cars run on.

The two main lines, Powell/Hyde and Powell/Mason leave from the intersection of Powell and Market and head towards the popular destination of San Francisco’s Fisherman’s Wharf. California/Van Ness line, which starts at California and Market and continues on until Van Ness. Don’t miss the great shots of Alcatraz on the Powell/Hyde line. The cable cars are the number 1 thing to do in San Francisco with kids.

My favorite tip for tourists wanting to ride the cable car is to skip the busy Powell Street line and take the California line instead. It rarely has a queue and we’re always able to get a seat outside or standing on the side. The views down California Street towards the Bay are pretty spectacular. It doesn’t go to the same touristy spots (the Powell line ends near Fisherman’s Wharf) but for tourists just wanting to ride a cable car it’s a much better option, as you avoid the really long queue for the Powell line. At busy times the queue for the Powell line can be at least 40 minutes to an hour!

Now, do tell, who doesn’t love a good water park especially in the summer months? Water parks these days are fun and comfortable. Yes comfortable at Boomerang Bay you can hire a cabana and relax while the kids splash, slip and slide their way to happiness. Boomerang Bay borrows its name from all things Australian.

Some of the rides include the Digeridoo falls, the Down Under Thunder, the Tasmanian Typhoon and the Screaming Wombat. The park includes 6 water slides and 3 pool areas and a true family favourite the lazy river.

Everyone enjoys the lazy river as the current helps you drift around the river course. The great thing about Boomerang Bay is that it’s attached to the Great America Theme ark. Entry ticket includes access to both areas

Where to stay in San Francisco

There is San Francisco accommodation to suit everyone. Being a big city you will find hotels, hostels, apartments and more to suit everyone and every budget. Some of the area’s worth considering staying in with teenagers are as follows

Locals Tip from Sally .
My top tip for what to avoid would be the Tenderloin! It’s such a central location and looks good on maps as it’s so close to a lot of touristy stuff, but it’s really seedy with a lot of homeless people and drug crimes. A lot of tourists make the mistake of staying there because it looks good on paper, there are lots of hotels and it’s cheaper than other touristy areas, but it’s not the safest area to walk around in at night.

Urban Putt had a dream indoor miniature-golf in San Francisco. Throw in awesome food and drink, a great Mission location, and an unswerving commitment to fun and you’ve got a formula for something unique and wonderful.

Shopping in San Francisco with teens

For those new to Escape rooms, this is a quick run down.

An escape room, also known as an “escape game”, is a physical adventure game in which players solve a series of puzzles and riddles using clues, hints, and strategy to complete the objectives at hand.

Escape rooms may consist of a large, single room, or span multiple rooms. Players are given a set time limit to unveil the secret plot which is hidden within the rooms. If your teen likes this stuff it is definitely one of the top fun things to do with teenagers in San Francisco

You will have 60 minutes to solve the puzzle and find the truth. Below you will find a map with locations of San Francisco Escape rooms.

A perennial favourite with teenagers in San Francisco weather visiting or residents is the cinema. San Francisco like any major city in the USA has a wide range of cinema’s for you to attend.

Why not get a bit of family competition going with a game of 10 pin bowling. Bowling is a great evening or rainy day activity. Teenagers vs adults is always a fun competition.

Places to eat in San Francisco with teens

Urban Putt had a dream indoor miniature-golf in San Francisco. Throw in awesome food and drink, a great Mission location, and an unswerving commitment to fun and you’ve got a formula for something unique and wonderful

Do I need to tip in San Francisco?

Tipping is not optional, employees in the service industry earn very low wages and rely on tips for a large part of their income. Only withhold tips in cases of truly horrendously bad service.

How to get to San Francisco 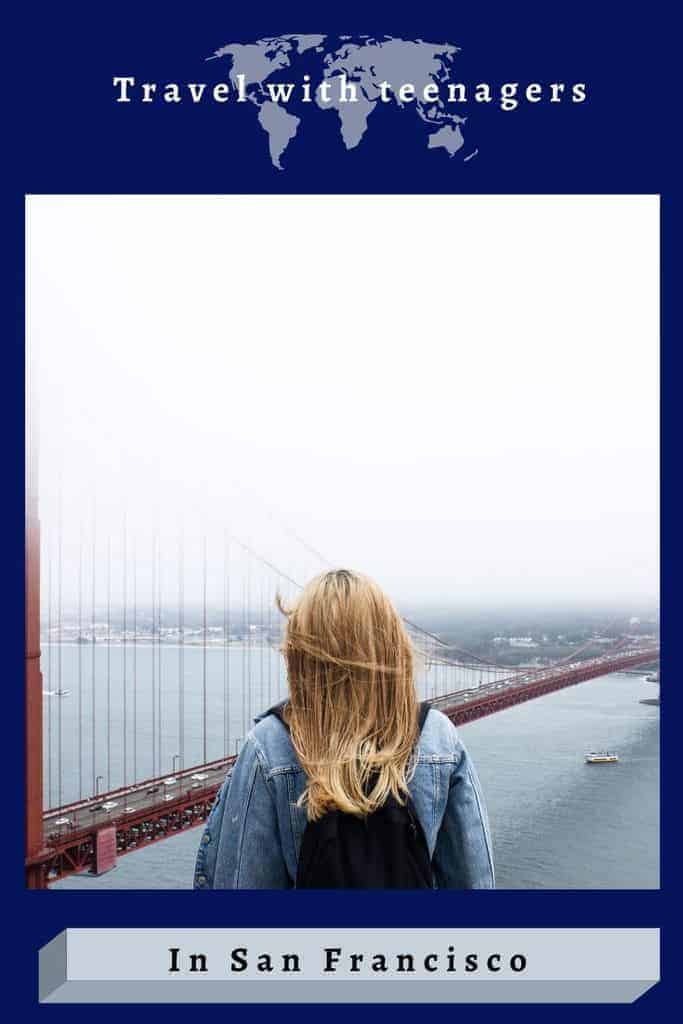